McDonogh’s Gable Braun (left) tries to get past St. Paul’s Frank Hapney after a faceoff win in Friday’s MIAA A Conference lacrosse opener. The No. 8 Crusaders built an early lead before pulling away in the fourth quarter to knock off the third-ranked Eagles, 12-9, in Owings Mills.

With a year of familiarity under a new voice and several new faces, St. Paul’s School lacrosse believes 2019 will be a season of improvement.

If Friday’s an indication, the Crusaders are ahead of schedule. The 8th-ranked Crusaders defeated No. 3 McDonogh School, 12-9, in the MIAA A Conference opener for both at John McDonogh Stadium in Owings Mills.

The Brooklandville school never trailed Friday, withstanding a McDonogh charge to send some shockwaves on the opening day of play in the nation’s toughest league. The Crusaders lost their final four league decisions last spring.

“I don’t know if it’s fair to compare to last year, but this team has a great senior class, a lot of great leadership and kids who care about each other,” said St. Paul’s second-year coach Trey Whitty. “I was proud of the way we responded.”

The Crusaders constructed a 7-2 advantage before McDonogh pulled even late in the third. St. Paul’s remained composed, scoring four of the game’s final five goals to avenged an 11-6 loss last spring.

Making the triumph even more sweeter was spoiling the Eagles’ debut as the nation’s top-ranked team, according to Inside Lacrosse.

“We were not ranked so we have a chip on our shoulders,” said Santos, a junior midfielder. “We’re trying to show everyone we’re the best.”

“This year’s team is a lot more brought in than we were last year. There’s a better vibe around the team,” said Milani. “We all know how good we can be and how much work we’ve put in.”

St. Paul’s didn’t break after McDonogh pulled even at 8 on longstick Jackson Bonitz’s second tally of the match, answering with a Higgins’ strike off a feed from Troy Barthelme with 18.5 seconds left in the third quarter. Junior Frank Hapney won the face-off to the start the fourth, resulting in Higgins’ unassisted strike.

The Eagles kept the pressure, closing to 10-9, but St. Paul’s got a big goal from junior Connor Stein with 1 minute, 42 seconds left in regulation, and just three seconds left in extra-man. Junior goalie Jamie Grant followed with a huge stop and Santos’ empty-netter helped the Crusaders close out the victory.

Grant, who finished with 12 saves, credited defensive mates Mason Woodward, Max Stukenberg, Will Burette and Chad Vasquenza for keeping McDonogh off the board the final eight minutes of regulation.

“You give all the credit to the senior leadership of guys like Milani, Mason [Woodward] for us together and making us really a family,” said Grant, who’s committed to Marquette. “We brought in all winter and just grind it, putting in all the work behind the scenes helped us come together.”

The Crusaders were engaged from the opening face-off Friday, building a 4-1 advantage after the opening 12 minutes. After erasing a McDonogh extra-man opportunity, St. Paul’s bumped its lead to 7-2 with 5:44 left in the opening half after Santos secured a hat trick.

“We worked all offseason on sweat performance…you could see on the field today we were giving more effort,” said Santos, an Ohio State commit who transferred to St. Paul’s from North Carolina’s New Hanover. “We were getting after it.”

Whitty wasn’t concerned with McDonogh’s national No. 1 ranking. He was impressed with his team’s work rate on both sides of the ball.

“We’re excited because we beat a great program in our league. The No. 1 ranking, I’d be lying if the kids didn’t talk about it. We [coaches] didn’t,” said Whitty, who was the defensive coordinator on McDonogh’s 2016 MIAA A title squad. “The focus was on ourselves. We feel like if we play really good lacrosse and focus on ourselves, we’re capable to beat really good teams.”

McDonogh, which won collected four victories over nationally-ranked squad including with a victory over then-No. 2 Culver Academy from Indiana Monday, found itself on top of the IL national poll Wednesday.

By early Friday evening, the Eagles found themselves 0-1 in the nation’s toughest conference for the first time since 2013.

“They [St. Paul’s] played really well and took advantage of our mistakes,” said McDonogh coach Andy Hilgartner. “I think that’s a hungry team and a hungry program. We weren’t at our best a lot today, but credit to St. Paul’s, they forced us into a lot of stuff.”

McDonogh looks to rebound at Loyola Blakefield Tuesday afternoon. St. Paul’s hosts St. Mary’s, hoping to start MIAA A play for the first time since 2010 when it last claimed the coveted the league trophy. 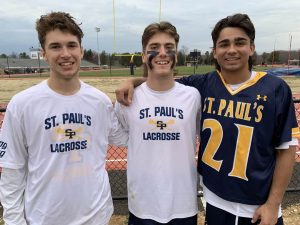 “We have a good mature team who believes in themselves, but ultimately, you got to do it on the field,” said Whitty. “The non-league wins were good, but I feel like this is a statement win but we got a ways to go.”