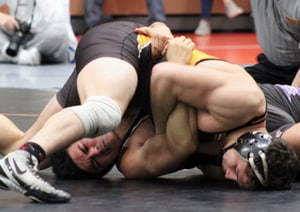 Dominic Solis got the Eagles started with a pin at 182lbs, helping McDonogh defeat Mount St. Joe for the first time in his four year career.

But if there is one thing the University of Maryland-bound Solis and Duke-bound 195-pound classmate Jack Wimmer have coveted above all else over their nearly four years of high school wrestling under coach Pete Welch, it’s a victory over arch-nemesis Mount St. Joseph, a program against which the duo had gone winless four times entering Friday night’s MIAA A Conference showdown at the Eagles’ Rollins-Luetkemeyer Athletics Center in Owings Mills.
“I remember coming in as a freshman and we lost to them twice in one season in dual meets, and then, we lost to them at the MIAA and state tournaments. In the past two years, we hadn’t been able to beat them, but I told our guys last year that we had to keep grinding and waking up at 6 a.m. every single day, thinking about it,” said Solis of the Gales, who are after their fourth straight Maryland Independent Schools state crown.
“The thing is, they’re a good team and everything, but every time we lost, they’d talk a lot of smack. I was kind of nervous at first, being the first match, but the crowd was pumping, so tonight, I knew we had to have this one. Our goal is to be the No. 1 team in the state. We’ve been preparing for this match, not just during this week, but for the entire season, and we were not going to be denied.”
Solis and Wimmer set the tone, the former’s second-period pin preceding the latter’s hard-fought decision over Gaels’ senior Patrick Warner and being the first two of four consecutive wins for a 19-point lead and, ultimately, a dominating, 41-25 dual meet victory in a match the Eagles never trailed.
“Bonus points are always important,” said ninth-year Gaels’ coach Harry Barnabae. “They went out and won the matches they needed to win and that’s why they beat us tonight.”
Solis led, 10-1, before planting Gavin Dixon in 3 minutes, 18 seconds, and Wimmer overcame Warner, 5-2, scoring the final three points of the match.
A major decision by senior Jackson Bonitz (220) and a forfeit to Maryland-bound Garrett Kappes (285) also paced the Eagles (18-0), winners of nine of the 14 bouts against the Gaels (10-1).
“They felt like the matchup between Warner and [Bonitz] was a better deal for them, but we won the coin toss, which was a big plus for us, so they couldn’t bump Warner away from me,” said Wimmer, a returning state runner-up.
“Dominic and I have been thinking about this all year, from August, September, October, and November — we were in there training and wrestling. We wanted this match so badly, and we knew that this was our year to do it. To finally get it done meant so much to us.”
The momentum, from start to finish, clearly was with the Eagles, who dominated where they were favored to win, took the pivotal bouts, and whose underdogs made it difficult for the Gaels who defeated them.
“What’s expected when you have a McDonogh-St. Joe match, the tide tends to turn at different points in time during a match, and I think Pete will tell you the same thing,” said Barnabae. “So you look to capitalize on those momentum swings, which is what they were able to do. They came to wrestle, they were prepared, they were the better team tonight and they won.”
Down, 19-0, after the first four bouts, the Gaels were on the scoreboard, 19-6, following a 62-second fall by freshman Coleman Nogle (106). The Eagles’ Joel Brown (113) answered with a fall of his own, followed by a 10-takedown, 22-7, technical fall by junior Cooper Flynn (120) over Gaels’ sophomore Jacob Wright that made it, 30-6. 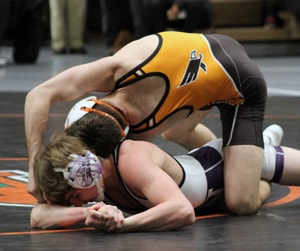 “I was looking for a fall, but it wasn’t there in the first period, so I knew I was gonna have to open up and to start scoring takedowns,” said Flynn. “I knew they had some good guys coming up, so I felt like a dominant win on my part was important. Everyone on our team was looking to score as many points as possible.”
The Gaels had hoped to regain some momentum from their best two wrestlers, Lehigh University-bound senior Chris Barnabae (126) and University of Maryland-bound Nathan Porter (132), the latter of whom has placed second once and third twice at private school states.
The son of coach Harry Barnabae, Chris is a defending private schools state champion and three-time finalist whose goal is to win a National Preps Tournament crown after having placed third twice.
But Barnabae was forced to grind out a 4-0 decision over sophomore Richard Fedalen, and Porter lost for the second time to freshman Clayton Gabrielson, this one by 6-4 as the Eagles stretched their lead to 33-9 with five bouts to go.
“That’s the first time they’ve met, but Rich is a worker who is going to keep on getting better, and we thought we were going to win that match,” said Welch.
“We’ve got a nice blend of experience and young kids, all of whom work together to build each other up, and that’s why we’ve grown as a team.”
Gabrielson was an earlier 4-2 winner against Porter at The Beast Of The East Tournament.
“I looked over at our bench and I could see our guys cheering,” said Gabrielson. “Then I looked over at their side, and I could see from their reactions that they were losing steam and that it was basically over.”
The Gaels trailed, 33-13, with four bouts remaining following a 25-10 technical fall by junior Clement Woods (138), who was nevertheless so frustrated by the tenacity of senior Mohammed Ndiaye that he was flagged for unsportsmanlike conduct, resulting in a team point deduction.
Adding insult was a come-from-behind, 9-5 victory by junior Matthew Lawrence (145) over Gaels’ senior Matthew Jun, which put the match away, mathematically, 36-13, with three bouts left.
“I was pretty much aware that my match was a pivotal match, whether I went at 138 or 145,” said Lawrence. “ I just kept my cool the whole time, focusing on scoring points as the momentum went my way.”
From there, the Gaels sandwiched falls by seniors Chris Roybal (152) and Anthony Zancan (170) around a technical fall by Eagles’ junior Harrison Trahan (160).
“The way we matched up, I knew that eight wins would put us in a good position to win,” said Welch. “But winning nine matches takes the pressure off of the other guys, and once we had that in the bank, we were in good shape
Pictured above: McDonogh’s Clayton Gabrielson picks up near fall points against the Gaels’ Nathan Porter at 132 (Photos and videos by Billy Loverocket).
McDonogh 41, Mount St. Joseph 25
182- Dominic Solis (McD) p. Gavin Dixon, 3:18 (6-0)

* Mount St. Joseph was deducted one team point after the 138lb match