Loyola rugby rise up for a second straight title And when the Dons, playing on their home field, did grab their first lead, 19-17, with 14 minutes left in the second half, they kept pushing forward to garner a 33-17 triumph and their second consecutive title.

Balog said that he missed more kicks than he would have liked in a 46-19 thumping of Mount St. Joseph in a semifinal, so he focused on slicing the ball through the football uprights yesterday in practice.

Although he missed his first attempt, the Dons’ captain made good on his next four.

“I wasn’t happy with myself,” Balog said. “So I practiced those tough angles a lot.”

It worked, because the scrum half’s kicks were well struck and dead center. 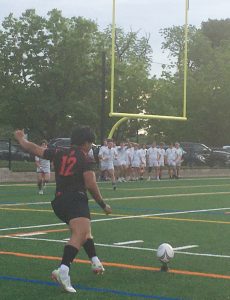 Archbishop Spalding’s Johny Huynh approaches the ball on a conversion-kick attempt in the second half of the Cavaliers’ 33-17 setback to Loyola Blakefield in the MIAA championship match on Wednesday evening in Towson.

Drew Baublitz snapped a 5-5 deadlock early in the second half with his second try of the match on a breakaway down the center of the field to put Spalding back on top, 12-5, after Johny Huhyn’s conversion kick.

DuBois’ answer and Balog’s kick knotted the score at 12-12 before Robert Ladd scored to put the Cavs in front again at 17-12.

DuBois then went back-to-back and, with Balog’s two-pointers tacked on, Loyola led 26-17 with eight minutes to go.

Senior Thomas Fitz-Patrick scored the game’s final try three minutes later, putting Spalding in a bind that would not go away.

“The difference between the teams is that we played all season with only 17 players,” Spalding coach Kevin Ruddy said. “And they (Dons) have a lot of big boys.”

Those fellows were back on their heels a little in the first half and early in the second.

“They had us in our own backfield a lot,” Loyola coach Jack Bonner said. “Then we started to play to our structure and attack more efficiently on their half of the field. We stuck to our systems — and to each other.”

Balog said that the Dons were having a tough go in the match’s early stages.

“It was a little bit of a reality check,” he said. “We just had to tackle and kick better and stop making mistakes like we did on the breakaway. But we’ve built a program here. We were the favorites coming into the season. And our seniors took it upon themselves to lead this team.”