Loyola captures a “must win”

Entering just the second game of its MIAA A Conference lacrosse schedule, Thursday, Loyola Blakefield was already facing a must win situation and head coach Ben Rubeor knew it.

“I certainly had the feeling, and I didn’t share it with the boys, this was win or we set ourselves up for a very difficult task to get into the playoffs,” said Rubeor, shortly after his fifth-ranked Dons earned a hard-fought, 13-12, win over a competitive Severn squad on Hargaden Field, to square its conference mark at 1-1.

Coming off a loss at St. Paul’s on Tuesday in which the Dons (3-5 overall) did not play particularly well, Loyola had to rally past the 7th-ranked Admirals (9-4) in the fourth quarter and hold on in the final minutes to win what proved to be an outstanding back-and-forth battle.

Trailing 9-8 at the start of the fourth quarter, Loyola scored three consecutive goals to grab an 11-9 lead and Severn never got even again.

Liam Bateman started the surge with an unassisted goal and Connor Hume, on a feed from Koby Smith, pushed the Dons in front, 10-9. It was their first lead since early in the second quarter. Ryan Dunn then capped the surge and completed a hat-trick, with an extra-man score, with 7 minutes, 14 seconds to play, pushing the Dons in front by two.

The two teams traded goals the rest of the way, as Loyola’s lead fluctuated between one and two goals, and junior Alex Reid scored what proved to be the game winner with 1:03 left, when he shoveled in an unassisted score in front of the crease, to put Loyola up 13-11. The Admirals made things interesting with an extra-man score by Michael Lamon, assisted by Ben Bedard, with 18.9 seconds left, but Loyola got the ensuing possession and Reid was able to circle the offensive end and exhaust the remaining time on the clock.

Dunn and Phil Wies each scored three goals to lead the Dons and both knew it was an important win for their team.

“I felt like this was definitely a must win,” said Dunn, who also had a pair of assists. “I thought everybody went out and played really hard. We had our backs against the wall. I thought we all knew what we had to do and just got it done.”

According to Wies, a senior, the team put the attention on themselves.

“We just focused on us,” said Wies. “It doesn’t really matter what the other team does. It’s all about us.”

The Dons may not have felt so good early, as Severn won the game’s first two draws and held possession for more than five minutes, triggering seven early shots and building a 2-0 lead.

Bedard broke the ice with an extra-man score, with 9:56 to play in the first quarter, and junior Joel Mandish converted a feed from Dylan Gergar to get the Admirals out of the gate quickly.

When Loyola finally got the ball in the offensive end, it capitalized. Dunn and Wies scored back-to-back goals to tie the game and Colin Clothier added a third straight unassisted tally to give the Dons their first lead, at 3-2, with 2:36 to go in the opening quarter.

Gergar, who had three goals and two assists, got the Admirals even just nine second later and that’s the way the quarter ended.

The second quarter was wide open with both teams flashing offensively, trading the lead twice, before Severn took a 7-6 advantage into the half.

In the third quarter, Michael Lamon scored an extra-man goal for the Admirals, to build Severn’s lead to 8-6, but Weis struck back with two straight scores to tie the contest once again. Gergar, however, came up with another clutch goal for Severn, sending the Admirals into the final quarter with a 9-8 lead.

The light went for the Dons in the final period and, according Dunn, it was a matter of the team finally playing loose.

“Our coaches talked a lot on offense about not playing like robots and just playing free and I thought we did a really good job of that,” said Dunn. “I thought we moved the ball well and just let the game come to us and we made the best of our opportunities.”

Severn coach Jamie McNealey saw his team fall to 0-2 in the league, after an opening loss to No. 2 Boys’ Latin, but he still feels like his squad is on the right track.

“Top to bottom it was a phenomenal performance by both teams. When we go back through it, just little things that added up, but they battled from the first second to the last,” said McNealey. “For us, we’re making strides. We know this is not the last game of the year, so we still have seven more rounds to go. When you come into hostile territory like this and have a lead late, it says a lot about the character of this team.”

Rubeor feels his team showed its best on Thursday.

“Our guys fought and we have not had the best start to this season, but the boys have stayed with this thing and I have been real proud of them,” said Rubeor. “One of my assistant coaches said that was the most complete game we’ve played this year and I agree.” 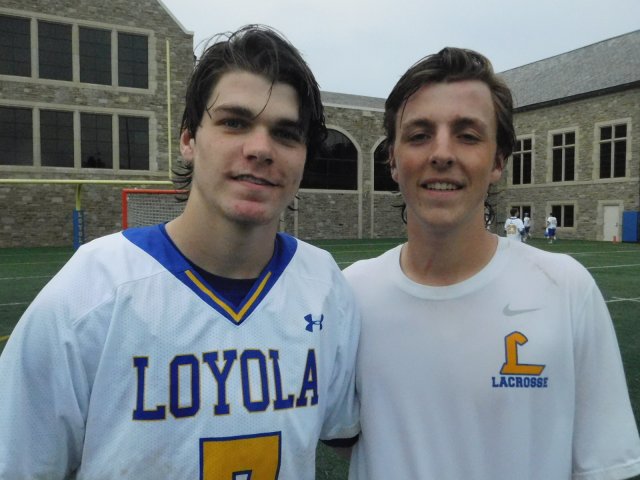 Both teams are now off until Tuesday when Loyola will visit Gilman and Severn will host top-ranked McDonogh. Despite the treacherous schedule in the MIAA A Conference, McNealey said he and his players would not have it any other way.

“That’s why these kids are here, for games like this,” said McNealey. “Nothing against any other conferences or teams, but if you want to play the best lacrosse in the country, this is where it is.”

Loyola downs St. Paul’s with a pair of first half goals