Ja’la Bannerman was sitting in English class at St. Frances Academy three years ago when a new student, Lamar Patterson, entered the classroom.

“This guy with dreads walks in and my friend said he’s famous,” Bannerman recollected. “They called him “Big Moves” on Instagram and has a big following. We just instantly clicked.”

Whether in class, the hallways or the gym, Bannerman could count on Patterson for an encouraging word or smile. Wednesday, Bannerman and St. Frances was stunned when Patterson, a member of the school’s football team, passed away.

Friday, the Panther girls and boys remembered him during its Homecoming doubleheader with Our Lady of Mount Carmel inside Phelps Gym.

“Tonight was good,” said St. Frances basketball coach and athletic director Nick Myles, sitting in his office afterwards. “It was important to try to get some normalcy. This was a sense of bonding and excitement.”

Five gold balloons, a No. 1 (Patterson’s uniform number), hung on the railing of the bleachers. There was a moment of silence, one minute each, before player introductions.

Patterson was killed when his car was struck by a MTA Light Rail train in Linthicum in Anne Arundel County. He was headed to the East Chase Street campus for school. 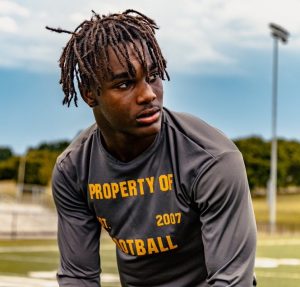 “We were on a group chat when he first heard,” said Panthers senior boys basketball guard Rynell Burt. “It shook us…we couldn’t believe it.”

Last weekend, Patterson visited Penn State. Pictures from his visit to Happy Valley as well as Virginia Tech littered his Instagram page which has nearly 100,000 followers.

Patterson, who came to St. Frances from Kissimmee, Florida, had a warm Southern charm that resonated through the small East Baltimore school.

“You can say so much about him, he just lit up a room,” said Bannerman. “He was the life of the party. He never had bad energy.”

“He’s a kid that wanted to be here and embrace what this platform offered, more importantly what could offer for his family,” said Hailemariam.

Hailemariam, who watches big St. Frances basketball games from a seat under the basket, said Patterson often drew his ire for not making sure the locker room was neat after offseason workouts.

“He was so proud,” said Hailemariam. “Before he left, he said ‘I love you Coach.’”

Patterson stopped past the gym to see Bannerman before she started practice.

“He said ‘I love you sis,’ and I said love you more bro, Be safe,” Bannerman said.

It was the last time Bannerman saw Patterson, who she called a “brother.”

“It’s family, family, family…everybody who comes through these doors we bring everybody together and make them feel like home,” said Bannerman. “When Lamar first got here, we instantly clicked. He was the go-to man if you needed help with something or just needed to talk.”

“Emotionally, it’s tearing at the soul of the school but we know God is able to heal. We find peace and refuge,” said Shelton. “He was a very good student and exceptional young man. He was a character kid.”

Shelton said his team “felt the sting” of the tragedy.

“Everybody has to grieve in their own way and we’re allowing them to do that,” he added.

The win, St. Frances’ fifth straight, sets up a showdown at Mount St. Joseph Sunday afternoon. The Panthers defeated the Gaels back in December.

Mount St. Joseph won its seventh straight Friday with a 73-57 decision over St. Vincent Pallotti at Smith Center. The Irvington school has wins over Mount Carmel and second-ranked Archbishop Spalding this week.

The No. 2 Panther girls dominated the final 16 minutes in an 85-49 over the ninth-ranked Cougars. Bannerman scored 28 points including seven 3-pointers for St. Frances (11-3).

Bannerman dedicated the performance to Patterson, who sat courtside for her games. The Panthers had “LLLP1” on the back of their jerseys Friday.