St. Frances football ready to move on after Poggi’s departure 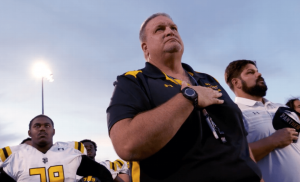 Biff Poggi (left) stands next to Henry Russell for the National Anthem before a St. Frances Academy football game in 2017. Poggi has stepped down as Panther co-coach to become an assistant at the University of Michigan, ending a successful and controversial four-season run at the East Baltimore school.

Messay Hailemariam was on Facebook Sunday afternoon when he came across a post. It was a reprint of the promotional picture from the last year’s HBO documentary on the St. Frances Academy football team.

“The Cost of Winning,” the title of the series, was replaced with “From Worst to First: The Decline of St. Frances.”

“If I could count on my hands how many people are saying we’re going to fail, I’d have to use my fingers, my toes, your hands, your toes,” laughed the new Panthers coach.

Hailemariam, who coached St. Frances from 2011 to 2015, is back in the head position after Biff Poggi stepped down as co-coach to become an associate coach on Jim Harbaugh’s staff at the University of Michigan. Poggi served in the same position for the Wolverines during the 2016 season.

Poggi, who spent three seasons at St. Frances and guided Gilman School to 13 MIAA A Conference championship in 19 seasons before stepping down after the 2015 campaign, said he wants a final opportunity to coach on the college level.

Hailemariam said Poggi started exploring opportunities after his youngest daughter, Mary, graduated from Roland Park Country School last month. She will attend Michigan in the fall. Brother Henry, a former Wolverine fullback who played for his father at Gilman, and sister Mellie, are Michigan graduates.

“We started talking about it. At the beginning of July, he sat down with his family,” said Hailemariam. “He wanted one last shot at college.”

Poggi, who shared head coaching duties at St. Frances with Henry Russell from 2017 to 2020, transformed the East Baltimore school into a national power. Between 2017 and 2019, the Panthers were 34-1 with three straight Top 5 national final rankings by USA Today and MaxPreps.

Their success, however, drew controversy. In the spring of 2018, MIAA A schools declined to play St. Frances, citing safety and competitive imbalance concerns as the school attracted talented student-athletes from outside the Baltimore region.

Messay Hailemariam has the reigns of St. Frances football. Hailemariam guided the Panthers from 2011 to 2015, winning back-to-back MIAA C Conference titles and transitioning the program into the MIAA A.

Some alleged racial bias in the schools’ decision not to play the Panthers, who outscored league opponents, 338-50, en route to the 2017 MIAA A championship. St. Frances was declared MIAA A champions in 2018 by the league’s Executive Committee, based in part on the decision, late in the spring, by the other schools that left Panthers scrambling to put together a schedule.

St. Frances has been playing as an independent member since. The controversy was featured on ESPN’s weekly news magazine “E:60” in 2018 and HBO’s four-part documentary last year on the Panthers.

Poggi, who made a fortune as a hedge fund manager, used his money at the East Chase Street school to build new locker rooms, offices, classrooms, and procured housing and a bus.

“We were struggling. Coach (Poggi) came and gave us an infusion,” said St. Frances athletic director Nick Myles. “We’ve made so many upgrades…he’s definitely set us up for success the next 20 years.”

“The plan always was to not make it dependent on one individual and establish more long-term sustainability,” said Hailemariam. “We have that in place.”

Poggi, VSN‘s Coach of the Decade (2010-2019), said he’s cut all ties with St. Frances, per NCAA requirements. For the next two years, Michigan will not recruit players from St. Frances, which produced current Wolverine running back Blake Corum (2019 VSN Offensive Player of the Year) and linebacker Nikhai Hill-Green.

Hailemariam, who was the team’s Director of Operations since 2016, said St. Frances will try to continue being among the nation’s top programs.

“It took an incredible merger, Biff and his staff to accomplish that goal. It’s full circle and it’s surreal to get a chance to be at the helm, but it’s the same plan we’ve put in place that continues to move along,” said Hailemariam. “As long as I stay focused on the kids and their spiritual and mental growth, we should continue being on that formidable road.”

Hailemariam said the coaching staff, which features most of Poggi’s staff from Gilman, remains, except for Russell, who was Poggi’s top assistant for several years at Gilman.

Russell, who was the St. Frances head coach in 2016 (team won MIAA A title), stepped down in the spring to focus on his young family and a business venture.

It will be business as usual for the Panthers, who played two games in the spring (lost to Good Counsel and Connecticut’s Thomas More) after the 2020 fall season was canceled due to the COVID-19 pandemic.

The Panthers, with 10 Division I commits, are ranked 10th in MaxPreps’ preseason national poll.

“Everybody thinks coach (Poggi) left and everything will go to shambles,” said Myles. ”Everything is in place for the long term.”

Myles said St. Frances football, which started playing varsity in 2009, was in dire straits when Hailemariam became the third coach in as many seasons in 2011. The Panthers found immediate success, winning the MIAA C championship in Hailemariam’s first season and repeated in 2012.

“To play with the big boys, you don’t only need financial stability, but facilities,” said Hailemariam, a former St. Vincent Pallotti assistant and University of Maryland walk-on player. “Biff and his family provided the seed money, and we’ve been tilling the soil the last several years, getting sunlight.”

Myles is more than confident in Hailemariam.

“The biggest thing is having the resources. Coach (Hailemariam) now has the resources,” Myles said. “Messay is a great football coach, we lacked the resources to be successful.”

“I don’t think I know everything, but what I’ve learned will help the St. Frances kids. That’s the most important thing,” said Hailemariam. “If it ain’t broke, don’t fix it. We understand the preparation, we understand the system to accomplish the ultimate goal.”

The Panthers will play local public stronghold Franklin on Sept. 11, tentatively at Morgan State University’s Hughes Stadium, marking the first time St. Frances has played an area team since Gilman School in the 2017 MIAA A final at Johns Hopkins.

Myles said the school plans to explore playing in the MIAA A in 2022.

“We never withdrew. We’ve been a member in every sport since 2005,” said Myles. “It’s fair to the kids. It’s right for the program.”