Needing a pair of wins to claim a championship, entering Monday’s finals of the MIAA B Conference baseball double-elimination tournament at Harford Community College, Indian Creek quickly took care of the first one, with a 10-0, 5-inning blitz of St. Paul’s, setting the stage for a winner take all “if” game, as both clubs will return to HCC on Tuesday. 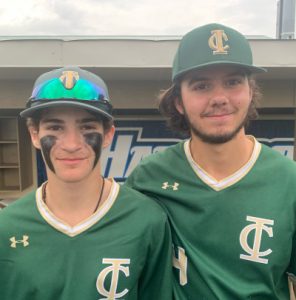 Indian Creek’s Riley Handwerger (left) had two doubles, two walks and scored three runs, while pitcher Bradley DeMoss pitched 4.2 innings of shutout relief to move the Eagles within a win of the MIAA B Conference title.

Indian Creek sailed through the contest despite losing starting pitcher Anders Liimatainen with just one out in the first inning. Liimatainen has been battling through several injuries in recent weeks and experienced pain in is right shoulder on Monday. Bradley DeMoss, however, was ready in the wings and came on to get the Eagles out of the first and through the next four innings without allowing a run. DeMoss was not overpowering, but he threw strikes, allowing just four hits and walking only two.

“Brad has been the guy out of the pen all year. He’s been Mr. Reliable,” said Indian Creek coach Matt Selmer. “He comes in and throws strikes. Anders (Liimatainen) has been battling, a back, leg, and shoulder and his shoulder is what took him out today. We knew if we went to the pen early it was going to be Brad and we knew we could rely on him to throw strikes. He does good at keeping guys off balance.”

The Indian Creek lineup, led by sophomore lead-off hitter Riley Handwerger, broke out early, with three runs in the first inning and six more in the second.

Handwerger, who was 2-for-2 with two doubles and two walks, while scoring three and diving in one, drew a lead-off walk in the first and catcher Nick Pratt, a UMBC commit, drove a single up the middle to start the game. Kyle Smoak-Brinkman came on as a courtesty runner for Pratt and both runners moved up a base on a one out passed ball. Handwerger then scored on a groundout to short and Andrew Harris tripled into the right-field corner. Chris Kokoski drove in the third run with a line single to right.

The Eagles continued to pile on runs in the second as they sent 10 men to plate and scored six times.

Handwerger knocked in the first one with an RBI double and advanced to third on Pratt’s second hit of the day. Logan Frazier followed with a looping RBI single to center to make it 6-0 and scored the seventh run, two batters later, on a wild pitch. That drove St. Paul’s starter Charles Konkolics from the mound and Kokoski greeted his replacement, Hayden Hair, with a 2-run triple to right to make 9-0.

Handwerger also scored the 10th run, in the third, after doubling with one out and later scoring on a throwing error.

“Riley has been impressive since the day he walked in the door last year,” said Selmer of his sophomore shortstop. “As a freshman he earned the right to get in our lineup right away and this year we went to him at short and he’s been awesome. He attacks pitches, he has a great eye and he’s got a great attitude.”

Handwerger relishes his role as the pace setter for the Eagles.

“I just get it started, get on base and it takes off from there,” said Handwerger. “As soon as I get on it gets going. We run the bases well, hit the ball well and we get going.”

DeMoss didn’t expect to be called on so early, but he figured he would get into the game at some point.

“To come out in the first inning, I don’t think I’ve done that all season, besides starting games, but as a reliever you have to be ready to pitch at any time,” he said. “I didn’t have time to warm up, but I warmed up later, and I was just trying to find a groove.”

Selmer knows his Eagles are hot, especially since the start of the post-season, and he hopes to keep it going for one more day.

“When we got to that first playoff game, there was a new level of energy,” said Selmer. “Our guys have just been attacking pitches and the offense has been real good. We’re hunting fastballs and our guys are up there ripping. We’re happy when they are swinging the bats.”

St. Paul’s (21-8) will look to regroup and find a way to slow the Indian Creek bats when the two teams meet again at 5:00 p.m. on Tuesday. The Crusaders are seeking to capture their first MIAA baseball title since they won the A Conference in 2002 and 2003.