by Gary Adornato
A member of the Maryland Interscholastic Athletic Association since the 2011-12 school year, Cristo Rey Jesuit High School had yet to experience the joy of a conference championship in any sport when its basketball team took the court, Sunday afternoon, in the MIAA C Conference championship game at Aberdeen Proving Grounds Federal Credit Union Arena on the campus of Harford Community College.
By days’ end, however, the Hornets were swarming with joy as they knocked off two-time defending champion Key School, 69-61, in come-from-behind fashion, to lock down that elusive first league title.
Key School denied Cristo Rey (19-10 overall) in last year’s title game, as the Hornets took their first run at the crown, and midway through the third quarter, the Obezags appeared as if they would return to Annapolis with a third straight title.
After a strong first half, Key (12-7) outscored Cristo Rey, 7-2,  over first two minutes of the third quarter to build what appeared to be a commanding 44-27 lead. But, in the blink of an eye, the Hornets, who went 14-0 this year against conference opponents (including the playoffs), flipped the switch.
Fueled by relentless defensive pressure, Cristo Rey began to get turnovers in bunches and turned many of them into easy baskets on the offensive end. The Hornets closed the quarter with an 18-4 run, including the final 12 points of the period to pull within three of Key, at 48-45.
According to Cristo Rey coach Derrick Lifsey, the halftime discussion was all about defense.
“We’re known for our defense,” said Lifsey. “We have a great defense. Instead of pressing full court, we pulled it back half court and then jumped the basketball. In the first half, we just got caught up I think. I reminded the guys at halftime, what do we do best. We play defense, so lets do defense. Don’t look at the score and we’ll pull this thing together.”
Cristo Rey continued to buzz throughout the fourth quarter.
With 5:31 to play, Jamal Lee, who connected on three three-pointers in the second half, drained his third from beyond the arc to tie the contest at 50 apiece. Key regained the lead momentarily on a layup by Augie Irving, but baskets by Sterling Holliday and Terry Curry pushed Cristo Rey in front 54-52. It was the Hornets first lead since they held a 4-2 advantage in the opening seconds of the contest.
Next, Noah Paucek scored to pull Key even one final time, but Cristo Rey scored the next six and never looked back.
“Turnovers, momentum swings,” said Key School coach Brent Coleman in explaining his team’s sudden fall in the third quarter. “I tell my team all the time, with basketball being a game of runs, runs will be made from both teams. When the other team is making their run, you have to withstand them. You have to take that punch in the mouth and get back up fighting.
“They are tough. Cristo Rey is a good team, a really good team, very scrappy.”
Both teams had trouble scoring the basketball early in the first quarter, but Key’s Mark Fusco scored seven first quarter points and helped the Obezags build a 17-12 lead after one. Elijah Jenkins had the hot hand for Key in the second quarter, scoring eight points, and the Obezags closed the half on a 10-2 surge to carry a 37-25 lead into the intermission.
Tyshaun Smith led Cristo Rey with 16 points and Khari Barrett finished with 14, while Lee and Alex Ferrer finished with 10 each.
Coleman expressed great pride in his program and its ability to reach the league final four straight times.
“I couldn’t be more proud of my boys than I am. I told them that before the game, win, lose or draw, from my assistant coach Later Williams all the way down to our team managers, I couldn’t ask for a better situation, being with these guys. They are humble, they’re hunger, they like to play. They like to compete, they’re respectful. What more can a coach ask?”
Irving led Key with 16 points. Jenkins netted 16 and Fusco finished with 12.
Lifsey spoke about just how much Cristo Rey’s first MIAA title means to the school community.
“It means everything to the school,” said Lifsey. “We’re Cristo Rey family. When we win, we all win. My prayer is that we can build on this and we can continue to get greater. We have a wonderful support staff. We have great board members. We have great leadership which is always looking to improve and I think this is a great start.”
MIAA C CONFERENCE BASKETBALL CHAMPIONSHIP
at APGFCU Arena – Harford Community College
CRISTO REY 69, KEY SCHOOL 61
KEY 17 20 11 13 — 61
CRISTO REY 12 13 20 24 — 69
KEY: Jaier Johnson 2, Augie Irving 16, Marshall Tanz 11, Elijah Jenkins 13, Noah Paucek 4, Zack Glime 3, Mark Fusco 12. TOTALS: 19 19-25 61.
CRISTO REY: Terry Curry 6, Darrin Yancey 8, Khari Barrett 14, Alex Ferrer 10, Tyshaun Smith 15, Eric Conway 2, Jamal Lee 10, Sterling Holliday 4, Christian Quesada 2. TOTALS: 25 14-27 69. 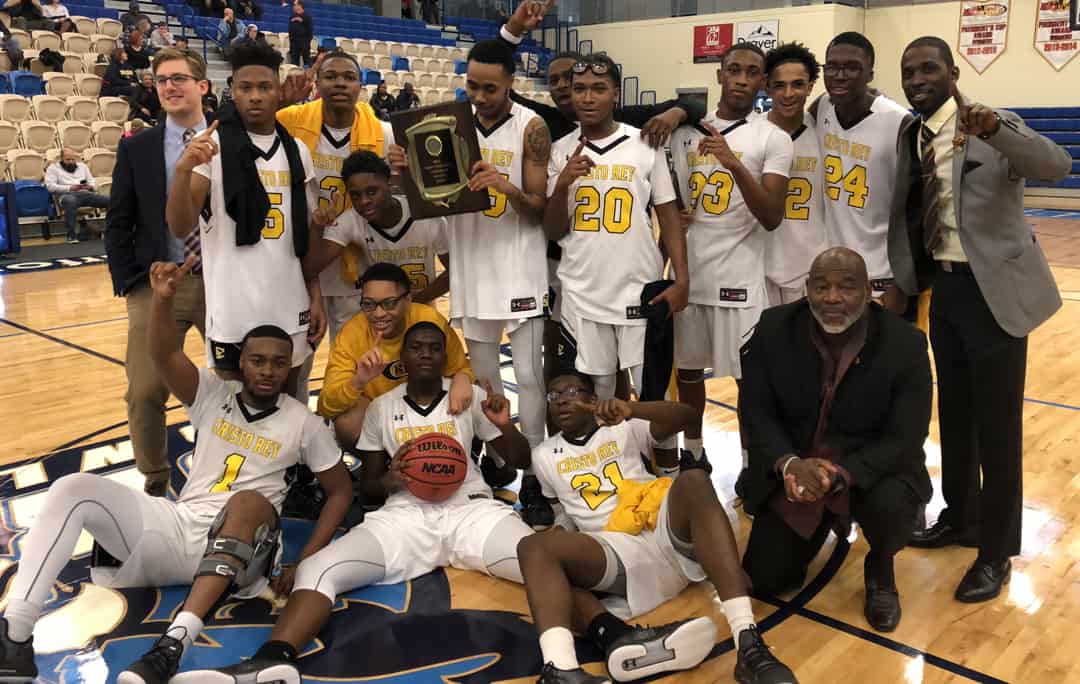