Prior to Friday’s 99th chapter in the storied history of the Boys’ Latin-St. Paul’s lacrosse rivalry, 19 balloons, one for each BL senior, were set free to soar over Roland Park as the Lakers’ Senior Day activities came to a close. It was symbolic of what was about to occur on the field. 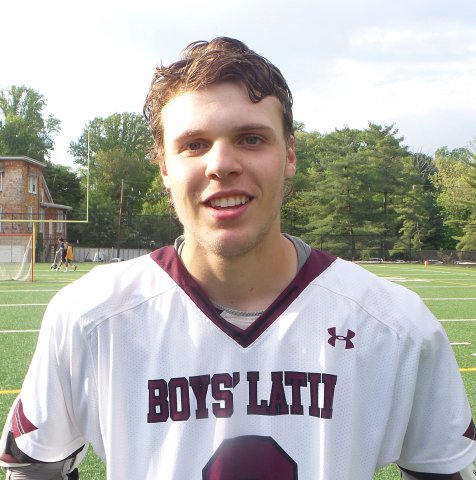 In a showdown to determine the second seed in the MIAA A Conference lacrosse playoffs, the 2nd-ranked Lakers soared in their own way, routing their long-time rivals, 16-6, before a big crowd of alumni and fans of both schools. Not only did the victory give Boys’ Latin a 50-48-1 advantage in the all-time series, it locked up the second-seed and a first round bye. BL will now advance to next Monday’s semifinals at Johns Hopkins Homewood Field where they could see the No. 4 Crusaders once again.

St. Paul’s (12-6, 6-3) will now host a quarterfinal game (4:15 p.m.) on Friday against Severn, which clinched the sixth-seed with an 11-7 victory over Archbishop Spalding. The winner of that contest will see the Lakers at Homewood. Calvert Hall also won on Tuesday, 12-7, in a battle with Loyola for the fourth seed. The Cardinals will now host the Dons again, on Friday (4:00 p.m.), in the other quarterfinal. That winner will face top-ranked McDonogh on Monday at Hopkins.

One of those BL seniors, attack Logan Wisnauskas abused the Crusaders for 6 goals and 4 assists for a rare 10 point performance in MIAA league action. The Syracuse University commit got plenty of help, especially from junior Luke Shilling and sophomore Matt Brandau.

Brandau netted 5 goals and dished out 3 assists, while Shilling drained 3 goals and handed out 4 assists.

The advantage would grow to 5-0 early in the second quarter before St. Paul’s finally got on the board with consecutive unassisted goals by Mitch Gordon and Patrick Karey. BL (13-3, 6-1) went to the half up 6-2 and took full control by outscoring the Crusaders 5-1 in the third quarter.

Wisnauskas pointed to excellent preparation for the big performance.

“Coach put in a good game plan for our offense,” said Wisnauskas. “We knew they were going to run zone most of the time and he put us in great spots. All we had to do was make plays.”

The senior also commented on the advantage of earning a first round playoff bye.

“It’s huge. We have to prepare for Hopkins. It’s a new atmosphere,” he added. “We’re going to play a team for the second time. We just have to come focused and ready to play.”

Boys’ Latin head coach Brian Farrell indicated that it was not difficult to motivate his team for this contest.

“Obviously, any time you play St. Paul’s it’s another level of intensity, another level of excitement,” said Farrell. “I thought our seniors did an excellent job of starting right out of the gate. I think it’s a tribute to the senior class and how hard everyone wanted to play for them to make sure they finished their last game here at Lake Avenue the right way.”

Of course, the one time Laker great commented on the performance of Wisnauskas.

“Logan is a senior. He took the bull by the reigns and he started us out, and everybody just followed along with him. Those guys have good chemistry together and it is fun to watch those guys.”

Finally, the Laker head coach made a point to mention the contributions of the squad’s scout team in getting the club ready for the Crusaders.

“Our scout team put in so much time this week and they did some stuff that St. Paul’s runs,” added Farrell. “Coach Ubriaco, Coach Nee and Coach Shilling had an excellent game plan, so guys who don’t get in the papers, the scout team guys, they really stepped up.”

Second half shooting spree propels No. 6 Boys’ Latin past No. 11 Loyola

Spalding boys stay hot with a win over No. 11 McDonogh