With a bag of ice on his right shoulder, a memento from his game-changing score in Boys’ Latin School boys’ lacrosse victory over Severn School Tuesday, Luke Schilling wasn’t trying to take matters into his own hands.

“It wasn’t as much as I got to make a play mentality as much as the play to be made,” said Schilling.

The play, Schilling getting around his defender for a strike in front of the goal and absorbing a high check resulted in an extra-man advantage for the Lakers. They took advantage, dropping six goals in 2 minutes, 22 seconds en route to a 16-11 decision over the seventh-ranked Admirals in the MIAA A Conference opener for both at J. Duncan Smith Field in Roland Park.

Grimes finished with five goals and an assist for Boys’ Latin (7-3 overall), and Matt Brandau added two goals and four assists. Ben Bedard had four goals for Severn (9-3), and Michael Lamon chipped in a pair of goals and two assists.

The Lakers, ranked No. 12 nationally by USA Today, combined the third quarter run with an impressive league debut for Grimes, to win their opener in the nation’s toughest high school league. The Lake Avenue school lost to McDonogh School in last spring’s title match at Homewood Field after ending Severn’s run in the semifinals.

“We took it to Severn twice and knew they were going to be firing on all cylinders and had to be prepared,” said Schilling. “We knew how tough it was going to be.”

The Lakers led 6-3 late in the first half, but Severn ceased momentum. The Admirals ran off four straight goals, the last from Charlie Olmert off a feed from junior Joel Mandish for a 7-6 advantage with 5:18 remaining in the third quarter.

Schilling quickly changed the tenor. The Johns Hopkins University-bound attack slipped away from his defender and cut across the goal. He was hit hard as the shot went into the goal and the Admirals were flagged for a two-minute illegal check.

After laying on the turf for a minute, Schilling popped right up. And so did the Lakers.

Grimes got a deflection off Severn goalie and scored with 3:52 left in the third. After another Admiral penalty put Boys’ Latin in a two-man advantage, Grimes ripped a shot in, just 25 seconds later.

Brendan Crouse, Grimes and Greg Ey followed with EMO scores, extending the Lakers’ lead to 12-7 with 2:24 remaining in the third. Brandau finished a pass from Grimes for an even-man goal, making it 13-7.

“Anytime one of your leaders gets hit like that you rally around that,” said Farrell. “He’s trying to make a play for his team and I thought he did a great job getting back up and into the game.

Grimes capped his first MIAA A match with his fifth score with 1:49 left in regulation. Ey and longstick midfielder Michael Ubriaco each finished with two goals apiece.

Though Grimes admitted to some nerves going into Tuesday, Farrell said Grimes and other varsity newcomers are advanced, due to a non-league schedule heading into league play.

“They’re prepared for this and that’s why you play a out of conference schedule so when you play a great team like Severn, they’re ready to go and have the confidence they need,” said Farrell.

The Admirals were brimming with confidence after claiming the lead midway in the third quarter. However, the Anne Arundel County squad were left playing catch up after Boys’ Latin’s third quarter rally. 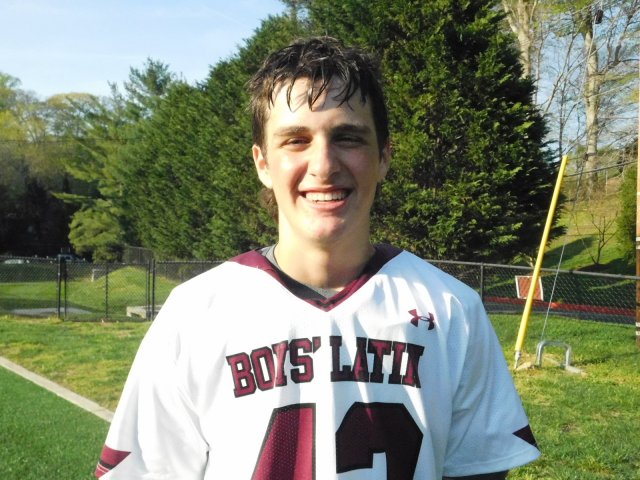 “We never got possession and they have a phenomenal EMO and you see five goals in two minutes,” said Severn coach Jamie McNealy. “In a situation like that, I’m OK giving three but five is hard to overcome. We battled back and played hard to the end and that’s all we can ask for.”

Calvert Hall baseball gets in the win column