The more things change, the more they stay the same, of sorts as St. Frances won, 30-8, in Russell’s coaching debut at Martin Luther King Recreational Park in Montgomery County. Gary Brightwell rushed for 128 yards and a touchdown for the Panthers, and wide receiver Tyree Henry hauled in a pair of scores.

The east Baltimore school wore down Avalon in the second half, winning its first regular season opener since 2013, its inaugural voyage in the MIAA A Conference. Russell, a longtime assistant at Gilman School, is now at St. Frances with White and Kormanik and several other Greyhound assistants after coach Biff Poggi stepped down in January.

Gilman won 13 MIAA A titles in Poggi’s 19 seasons. Russell, who was associate head coach under Poggi (now an advisor on the University of Michigan coaching staff), is St. Frances’ fourth coach in the program’s nine-year history.

The last few months have been a whirlwind for Russell and his staff, establishing a culture on the field and the classroom. They had to mesh the holdovers with nearly two dozen transfers.

“It was almost surreal just being on the field, having a team that looks together and that’s been through so much,” said Russell. “I can’t believe we played a game tonight.”

“We have a lot of work to do,” said Panthers senior tight end Myles Wright, one of seven returning letterwinners. “I think we did a lot of stuff well and we have a lot to improve on.”

The Panthers totaled 292 yards on offense with 194 on the ground. Junior Terrell Smith had a six-yard touchdown run, and senior quarterback Isaiah Robinson (10-of-21, 98 yards) threw two scores.

The Panthers allowed just 16 yards in the second half.

“We were good, but we got a lot of work as far as our coverages,” said Thomas. “We got tempo and brought a lot of energy.”

After teammate Jordan Swann knocked down the ball on a backward pass on the opening play from scrimmage, Thomas intercepted Avalon quarterback Quan Vines at Avalon’s 35-yard line. Seven plays later, Henry pulled down a Robinson throw in the back of end zone for the Panthers’ first score of 2016.

Avalon, which beat St. Frances at Patterson Park in the 2015 opener, tied the game at 8 late in the first quarter as Reggie Anderson caught a ball that went off Smith’s hands in the end zone for a 49-yard score. Henry acquired the lead for good for St. Frances, taking advantage of blown coverage for a 50-yard score with 15 seconds left before halftime.

“I like our team a lot. I think we’re going to do big things,” said Henry, who has a verbal scholarship offer from the University of Maryland. “If we continue to push ourselves and do everything as hard we can, everything good will happen for us.”

Brightwell, a Temple commit who transferred from Delaware’s St. George’s Tech, powered his way for 73 of his 128 yards in the second half. He capped a seven-play, 57-yard drive with a 1-yard run, extending St. Frances’ advantage to 22-8.

Russell said it’s been “on the go” since arriving at St. Frances in February. He will take a rare off day Saturday, playing in a charity golf event in honor of his former Naval Academy classmate Brendan Looney.

The Panthers next assignment figures to be much tougher – a nationally televised match (ESPNU) with New Jersey powerhouse Paramus Catholic at the University of Michigan next Friday night. 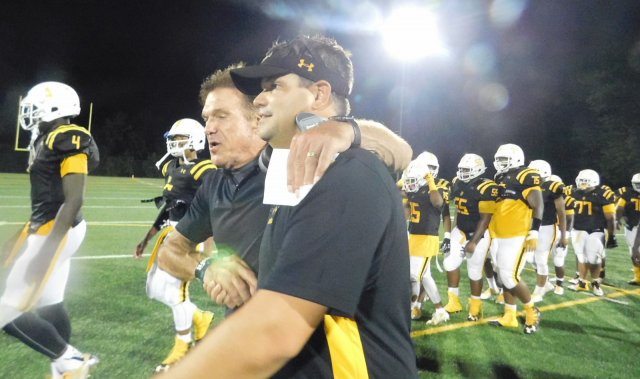 “We got to keep working. Next week is a huge test,” said Russell. “We got to get a lot better in a short amount of time.”