Two squads looking to grow up in 2016 staged a wildly entertaining MIAA B Conference football battle on the turf at Boys’ Latin School’s J. Duncan Smith Field Friday, with visiting John Carroll charging back from a 27-7 deficit to stun St. Paul’s School, 36-33, for the Patriots’ first victory of 2016.

The contest was moved from Brooklandville to BL because of repairs being made to Tullai Field, but the Crusaders quickly made themselves at home, jumping on top 14-0 in the first quarter with a pair of short touchdown runs by junior quarterback Kevin Madden. St. Paul’s eventually grew its advantage to 27-7 as Madden threw for three second quarter scores, including one for 45 yards to junior Zyon Jenkins and another for 84-yards to sophomore Quizzon Tarver.

In their comeback, the Patriots (1-3 overall, 1-0 MIAA B) got big plays from several players on both sides of the ball, but no one came up bigger than junior quarterback Qadir Ismail, a transfer from Patterson Mill, who shook off some early struggles to throw for 267 yards and three scores and rush for 44 yards and another touchdown.

John Carroll outscored St. Paul’s (1-2, 0-1 MIAA B), 22-0,  in the second half, with Ismail connecting with senior Niko Rice for a 9-yard touchdown pass, in the right corner of the end zone, with 1 minute, 9 seconds left for what proved to be the game-winner.

The winning drive began when the Patriots stopped the Crusaders on back-to-back short yardage plays at the John Carroll 12-yard line, with 3:28 remaining, to prevent what could have been a game-clinching score. Dorian Woody (20 carries, 74 yards) started the march with a 15-yard run and Ismail connected with Avery Jones for a 44-yard gain to move the ball to the St. Paul’s 19.

Jones, who had a monster game with five catches for 155 yards, including an 85-yard touchdown reception in the second quarter, made a tough leaping catch in traffic and then fought through a couple of tackles for another 10 yards. Two Woody runs and an Ismail completion to Anthony Magwood advanced the ball to the St. Paul’s nine, before Ismail found Rice. 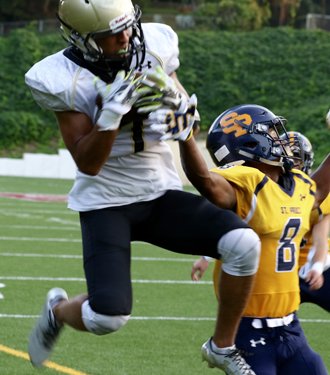 Rice, who also had a 17-yard touchdown reception in the third quarter, was looking to make plays for his team.

“I heard coach say on the sideline ‘Niko time’ and, in my head, I said big time players make big time plays. So, I was ready to make a play and he trusted in me, so we connected.”

Rice’s first score cut the St. Paul’s lead to 33-21 with 2 minutes, 42 seconds to go in the third quarter and Ismail cut it to 33-28 with a 1-yard rushing touchdown early in the fourth quarter.

As elated as John Carroll was with the victory, the young Crusaders were equally devastated.

Madden was sensational, completing 25-of-41 passes for 356-yards and three scores. He did have one interception, which came on the final play of the game as he tried for a desperation score. Nine different Crusaders caught a pass, led by Jenkins, who had five grabs for 93 yards, while Mornhinweg had six catches for 88 yards and a touchdown. Tarver had two catches for 94 yards, including his long TD catch.

“We played great, then we didn’t make any plays in the second half,” said St. Paul’s coach Paul Bernstorf. “We went up and down the field offensively and twice we needed one foot and we couldn’t get one foot.”

As he addressed his heartbroken squad in the post-game huddle Bernstorf told them he saw “flashes of brilliance” and he hopes their performance against the defending league champs will give them confidence which matches their talent.

Ismail, who was not with the Patriots during their 12-0 championship season in 2015, said the group remained committed to each even during their 0-3 start.

“We took a trip to Tall Timbers (WV) during the preseason and we got very close during that and this just shows how close of tight-knit group we are,” said the son of former Baltimore Raven wide receiver Quadry Ismail. “I just trust in my guys, trust in my line. I give all the props to the line. They gave me plenty of time today. Dorian running the ball, they gave him a ton of good blocks and I believe that is the reason we came back.”

Woody finished with 74 yards rushing on 20 carries, including his team’s first touchdown, and he took a screen pass 69 yards on a third-and-14 play from the JC 14, in the third quarter, to move the ball to the St. Paul’s 17. On the next play Ismail connected with Rice for a touchdown.

Woody said he was looking to make a statement to his coaches that he wants to be the team’s top back.

“We’ve been going from running back to running back and I thought today was the time to step up,” said Woody. “We had to get our team back and finish and I just wanted to step up and do something to get us the W.”

Despite all the success the Patriots had last year, coach Keith Rawlings acknowledged that this was a huge win for his current group.

“Without question, it has been a tough start to the season. We’ve played some big boys and our guys have been getting beat up. We came out and things weren’t going our way, but they showed a lot of character,” said Rawlings. “They don’t have experience coming from behind. They don’t have experience scoring points, so this is going to be a big win for us, to get us going.

“It’s going to build some confidence. We have a lot of young kids. We’re rebuilding. Last year we lost a lot of senior leadership and a lot of talent, but we’re rebuilding and some guys are really stepping up.”

Next Friday night, the Patriots will welcome another tough non-conference foe to Bel Air, as they will host Haverford (PA) School. St. Paul’s will remain in conference, traveling to Severn School Friday afternoon.

BTC Super 22 honors football excellence from across the state

Key lays the Wood to Pallotti