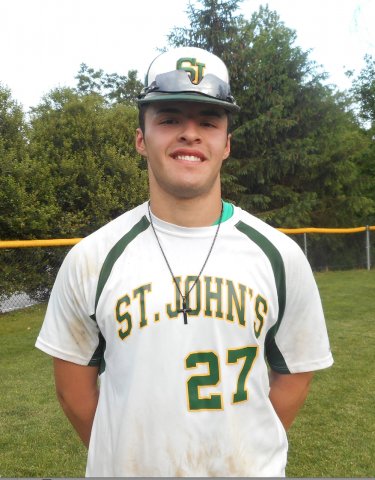 Working under a broiling sun for most of the game, the junior southpaw made Gerstell’s batters sweat while throwing 66 strikes out of 101 pitches in a 5-0 shutout of the Falcons at St. Paul’s School in Brooklandville.

Javitt, who is 5-2 with a 1.67 ERA, fanned 11 and walked just two in a sparkling route-going performance that gave the Vikings (17-4) their fourth consecutive title.

“My fastball was feeling great and I had a good off-speed,” the UMBC recruit said. “And I was throwing strikes. My arm just felt great. They’re a great team and they have a lot of good players — one of the tougher teams in our conference — but we work hard in practice and we just got the job done today.”

St. John’s coach Omar Enriquez, who said that his team hopes to move up to the B Conference next spring, noted that Javitt’s curveball was working to perfection.

“By the second inning, the way that curve was working, I knew it would be tough to get any runs off him today,” Enriquez said.

“That was the difference today,” Poklemba said. “He beat us earlier in the year, and I think we had a couple of more hits off of him. He didn’t locate it as nearly as well as he did today. He throws hard, but when he is breaking the curveball off, he is really tough.”

Javitt’s counterpart, sophomore Reece Early, was also throwing well, although the Gerstell right-hander was tagged with the loss after pitching five innings and not allowing an earned run. He yielded four hits and walked three.

His bad luck began when an error with two outs in the first inning allowed a run to score after singles by Javitt and center-fielder Alex Morgan put two runners aboard. A second run crossed the plate after a wild pitch to give the Vikings a 2-0 advantage and all the cushion Javitt would need.

Another error in the third allowed shortstop Zach Berberich to reach base and eventually score on Morgan’s single to right.

“He threw a great game, and well enough to win,” said Poklemba, whose team committed three errors. “He really fought. You can’t ask much more of him than that. We dropped two fly balls. When you give up runs like that, you are not going to win too many games.”

Meanwhile, Javitt found ways out of trouble even when he had a minor hiccup by walking Gerstell freshman catcher Chris Hagan in the fourth.

Javitt then caught Hagan trying to steal by throwing to first baseman Morgan, who gunned a throw to Berberich in plenty of time to get the sliding Hagan.

The play loomed larger when the next batter, junior third baseman Brennan Sedney, topped a dribbler for a hit before Javitt threw wildly to first and Sedney advanced to second.

Instead of having runners at second and third with one out, the Falcons only had a runner on second with two down.

Regardless, Javitt got out of the inning unscathed after getting senior right fielder Taylor Hodges to ground out.

Javitt retired nine of the final 10 batters to cement the win, even though the Vikings added a pair of insurance runs in the sixth on an RBI double by third baseman Reagan Mills and a wild pitch.