Though Mount St. Joseph High boys’ basketball team possess one of area’s elite frontcourt, its success this season will rest with the development of its young guards. The unit passed its first major league road challenge with flying colors Friday evening.

The Irvington school showed its poise in the final minutes in front of a festive standing room only audience, winning for the 24th time in 25 regular season decisions, dating back to last season. The lone loss in that stretch came against Glenelg Country, which the Gaels slipped past in the league semifinals.

“They’ve been taking steps forward the past few years and they’re legitimate contenders in this league,” said Clatchey.

“They always give us a tough game,” said Myers. “We just tried to be aggressive and play defense.”

Myers scored all 12 of his points in the second half, including a 3-point dagger from the corner after the Dragons pulled to within 53-50 early in the fourth quarter. He answered another Glenelg Country score with a successful drive to the basket, putting the Gaels up 58-52.

“It was tight and we needed a bucket,” said Myers. “Last year, I was a role player, not turn the ball over and play defense. This year, I have to score a little more.”

Jalen Gabbidon’s 3-pointer had the Dragons within a possession at 58-55, but Mount St. Joseph again responded. Senior Nigel Jackson got an offensive rebound and basket, followed by junior Jalen Smith’s short jumper over Glenelg Country’s Anthony Longpre for a 62-55 advantage with 4 minutes left in regulation.

Bishop, whose 4-point play helped steady Mount St. Joseph in the second half of its victory over then-nationally ranked St. Benedict’s of New Jersey in the Shirts vs. Skins Classic last Saturday at St. Frances Academy, got the southwest Baltimore powerhouse off nicely Friday evening, scoring 11 points in the first half as the Gaels led, 31-25, at intermission.

“They got bapitized a little bit tonight and they delivered,” Clatchey said of Myers and Bishop. “James’ defense has really improved and he’s starting to embrace that side of the floor. You got to have good guards.”

“We have to behave tougher on the basketball floor,” said Quinlan. “They’re tough kids but we’re not always behaving tough. At this level of competition, it’s the difference between a win and a loss.”

The Gaels have another tough challenge Saturday afternoon, taking on second-ranked Poly in the inaugural William Wells Challenge at UMBC. The event is in honor of the longtime St. Frances Academy coach, who retired in 2009. 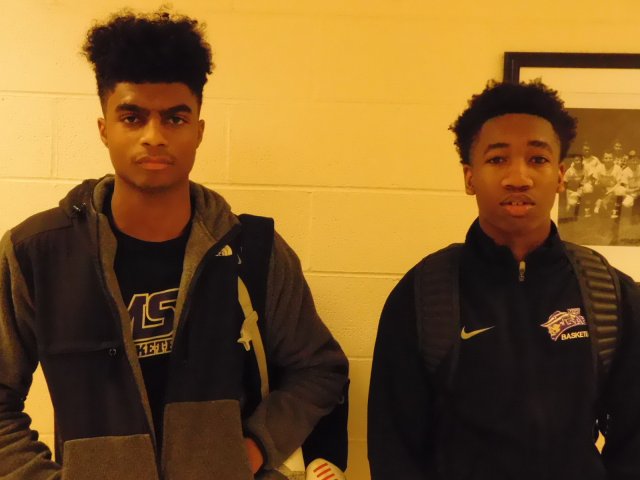 “Coach Wells is a legendary figure in Baltimore,” said Clatchey, who matched wits with Wells for years in the MIAA and Baltimore Catholic League. “We’re excited and honored to play in the first one.”