McDonogh holds off No. 1 Curley for MIAA A soccer 3-peat; Petrera has hat trick (VIDEO HERE!) 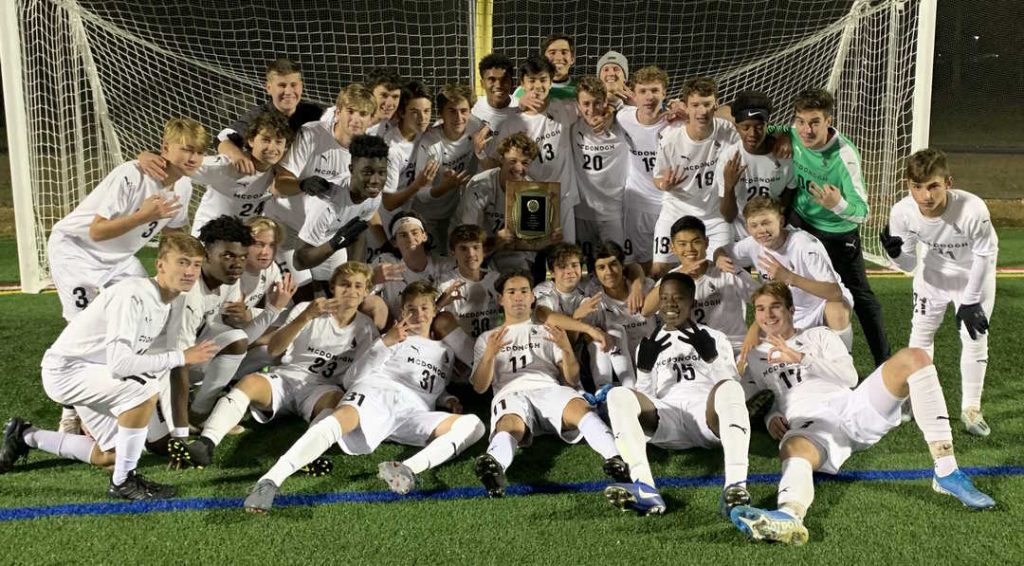 by Derek Toney
On a night most of Baltimore watched the Ravens take down the NFL’s greatest dynasty in New England, McDonogh School boys soccer’s dynasty reached another milestone Sunday.
The No. 2 Eagles defeated top-ranked Archbishop Curley, 3-2, in the MIAA A Conference title game in front of an estimated 1,000 at CCBC-Essex. Junior Vincent Petrera scored all three goals for McDonogh (15-4-1 overall).
Behind Petrera’s clutch performance and the Eagles’ defense over the final 15 minutes, the Owings Mills school secured the first 3-peat in MIAA A soccer and second overall in league history (Severn won three B titles from 2014 to 2016). McDonogh now has a MIAA-best 11 championships.
Where some teams would downplay, the Eagles embraced the challenge of chasing history.
“We talked about it and made it a part of a goal this season to do something that’s never been done in the best high school soccer in the country, in my opinion,” said McDonogh coach Brandon Quaranta. “It’s something that will hang on for a while and I’m not sure if it will be done again.”
“We had a lot of setbacks this year but you can’t focus on the setbacks, just how you overcome them,” said Petrera. “We overcame them all and really started coming together as a team. We reached our peak in the championship game.”
There was no question Petrera, a transfer from Worcester Prep on Eastern Shore, was ready for the bright lights Sunday. The 6-foot-2 junior made like Steph Curry with a pair of long range blast off his right foot in the first half.
Less than a minute in the second half, Petrera knocked in a shot from about 5 feet, off a pass from Joel Brown, for the hat trick. He had 17 goals and 12 assists – both team-best – this season.
“I don’t know how many hat tricks have been scored in the MIAA A final, can’t be many,” said Quaranta. “Not only did he scored goals, he scored two goals while they [Curley] was the better team and outplaying us.”
Curley (16-3-1) had the better of play early with senior Jalen Anderson missing wide on a couple of quick blasts. The Friars had the speed and quickness.
McDonogh had Petrera. On the Eagles’ first push into Curley’s side, Petrera collected a ball on the right side, and, on a tough angle, ripped a shot into the near post, giving McDonogh a 1-0 lead in the 8th minute.
The Friars answered in the 14th minute as senior Dylan Sloan followed-up Anderson’s shot that banged off the crossbar. Petrera dropped another laser, this one from about 20 yards, for his 7th game-winning goal this season.
“We knew that we had an advantage out wide with our wingers, like Vincent. We get the ball out to them quickly and do our offense fast,” said McDonogh senior Mason Christian. “Vincent had a great game today.”
The Eagles upped the lead to 3-1 on Petrera’s final goal, but Curley wasn’t done. Sloan scored his second goal, bringing the Friars within one with 32 minutes remaining in regulation.
The Baltimore City school pressed in the final minutes, but McDonogh was able to avoid danger with several clears. Curley defeated the Eagles, 3-0, during the regular season.
Richie Nichols drew comparisons to last year when Loyola humbled the Eagles, 5-0, in the regular season. McDonogh spoiled the Dons’ bid for a perfect season with a penalty kick victory in the final at Anne Arundel Community College.
“It just shows what kind of a team we are and what kind of a program we are,” said Nichols.
Meanwhile, the wait continues for Curley. Sunday was the fourth title game loss for the Sinclair Lane school, this year’s No. 1 seed, since hoisting the championship plaque in 2006.
Longtime Friar coach Barry Stitz was proud of his team’s tenacity.

“We’ve been behind a couple times throughout the year and came back, and this was one more instance of it tonight. Especially when we gave up the goal early in the second half and went down 3-1,” said Stitz, who had 14 seniors play their final game. “I told them a lot of teams that would have ended up a 5- or 6-1 game with both benches being emptied. But they battled back, it was 3-2 and we had a couple chances to tie it up and grab the momentum back. It was a great effort — really good high school game and atmosphere.”

Last season, McDonogh slumped late in the regular season before regrouping for a title run. This year, the Eagles dealt with injuries and a key player leaving the program.
But, once again, McDonogh answered the call when November arrived.
“The reality is the team that’s playing best in September is not going to win the championship,” said Quaranta, who has guided the Eagles to four titles since succeeding Steve Nichols, who’s Loyola University’s men’s soccer coach. “You got to hit your stride late in October, playing best soccer…we started playing better soccer, that’s what we pride ourselves on. When the weather starts turning, we want to take it up notch. I think we did that this year.”
“We had a great season though we had some ups and downs, that’s what makes it so much sweeter,” said Christian, who will play for James Madison University next season. “I’m just really happy to be here, really happy to win this championship with my boys. It just feels too good.”
MIAA A Conference soccer championship
at CCBC-Essex
No. 2 McDonogh School 3, No. 1 Archbishop Curley 2
Goals: McDonogh – Vincent Petrera; Curley – Dylan Sloan
Assists: McDonogh – Mason Christian, Joel Brown; Curley – Jalen Anderson
Saves: McDonogh – Connor Smith 4; Curley – Chris Denholm 3
McDonogh 2 1 – 3
Curley 1 1 – 2