High drama in the MIAA

Gilman battles No. 1 McDonogh to a 1-1 draw; No. 2 Loyola slips past Calvert Hall in double OT; Curley and MSJ also win 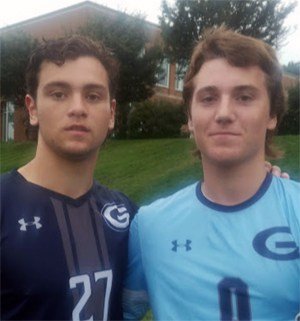 by Joe DiBlasi
Back on September 8th, the Gilman Greyhounds suffered a decisive, 5-1, MIAA A conference soccer loss to the No. 1 McDonogh Eagles in Owings Mills.
When McDonogh (7-0-1, 7-0-1 MIAA A) showed up for the rematch with the 13th-ranked Hounds, in Roland Park on Friday afternoon, the Eagles were 7-0, and tied for first place in the conference with the Loyola Dons.
Gilman (7-3-1, 5-2-1 MIAA A) captured four straight conference wins after the loss to McDonogh in September, before dropping a one-goal game to Loyola last Monday.
The third-placed Greyhounds came back from the loss to the Dons with a 2-0 win over St. Paul’s on Wednesday, and they seemed primed for their rematch with the Eagles.
Coach Jon Seal’s team showed their mettle on Friday.
After 40 scoreless minutes, Gilman senior Logan Paff gave the Hounds a 1-0 lead at 22:58 in the second half.
“Paff got in behind and buried it,” said Seal, “but it was short-lived.” 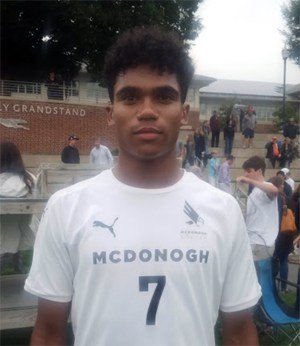 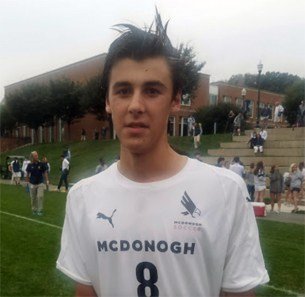 Short-lived indeed, as the Eagles’ Mason Christian answered just 30 seconds later on the next McDonogh possession to tie the game 1-1 on a feed from Andrew Privett.
After 38 more minutes of action, including two 10-minute overtime periods, the hard fought contest ended in a 1-1 tie.
Privett said, “”It was a hard-fought battle the whole game, 100 minutes of fighting back and forth. It was disappointing with all the possessions we had, but we just couldn’t finish our best chances.”
Seal said, “I feel good about this. It was the great atmosphere and both teams played extremely hard, and both teams had chances. Their Richie Nichols hit the crossbar [with one minute to go in the second overtime].”
Seal continued.
“We’re obviously not satisfied with a tie, but I think it’s deserving that both teams walk away with a point. It would have been a shame to see someone lose this game. We did a great job collectively and Grant Farley (10 saves) was unbelievable in the goal. He’s only a sophomore, but he plays like a senior.”
Brandon Quaranta, the coach of the defending conference champion Eagles, said his team played well.
“That was one of the better games we’ve played all season,” said Quaranta. “We’ve played poorly in our last four or five games but we got wins, and today we played well and got a draw. That’s life in the MIAA.
“We were unlucky today. We generated chances and we carried the game. It was unfortunate that we did not pick up three points. I give them credit for grinding and playing really hard and from keeping us away from that second goal.”
Quaranta praised the play of Nichols, Privett and his keeper Kieran Baskett,who had nine saves.
The tie dropped the Eagles (7-0-1) into second place in the conference with 22 points
Loyola (9-0, 8-0 MIAA A) took over undisputed possession of first place with 24 points on the strength of a 1-0 double overtime victory over Calvert Hall on Friday. Matthew Lala got the only goal of the game with three minutes to go in the second overtime.
At Blakefield, No. 2 Loyola completed a regular season sweep of arch-rival Calvert Hall, but not before the No. 10 Cardinals forced the Dons into the second overtime in a scoreless battle.
With three minutes left in the second overtime, Lala found himself in the box, after a cross from the left side, and hit a low bending shot with the outside of his right foot to the lower near post through traffic for the win.
It was a very well played match, with the creating a few good opportunities on goal in the first half, but not being able to capitalize. The second half saw the Dons on the front foot pressing the Cardinals in their half, creating numerous opportunities but they were unable to find the back of the net.
In the first overtime the Dons continued to press and create chances but the Cardinals preserved the scoreless tie, thanks in large part to nine saves from senior goalkeeper Spencer Nattans.
Pat Milmoe had two saves for Loyola to claim the shutout.
One other MIAA A game went into overtime on Friday, as Mount St. Joseph (4-5-1, 4-51- MIAA A) defeated John Carroll (2-11, 0-9 MIAA A), 2-1. Dmitri Jordan and Tyquan Stroud scored for the Gaels and Stroud also had an assist.
The only game that did not reach overtime was in Brooklandville where No. 9 Archbishop Curley (5-6, 5-5 MIAA A) blanked St. Paul’s, 5-0. Anthony Schlee, Jalen Anderson scored single goals for the the Friars, while Anthony Dragisics netted a hat-trick.
Friday’s result, left Gilman in third place with 16 points, followed by Calvert Hall and Curley with 15 point each. St. Joe has climbed back in the playoff chase, holding sixth-place with 13 points, while idle Archbishop Spalding is in seventh place with nine points.