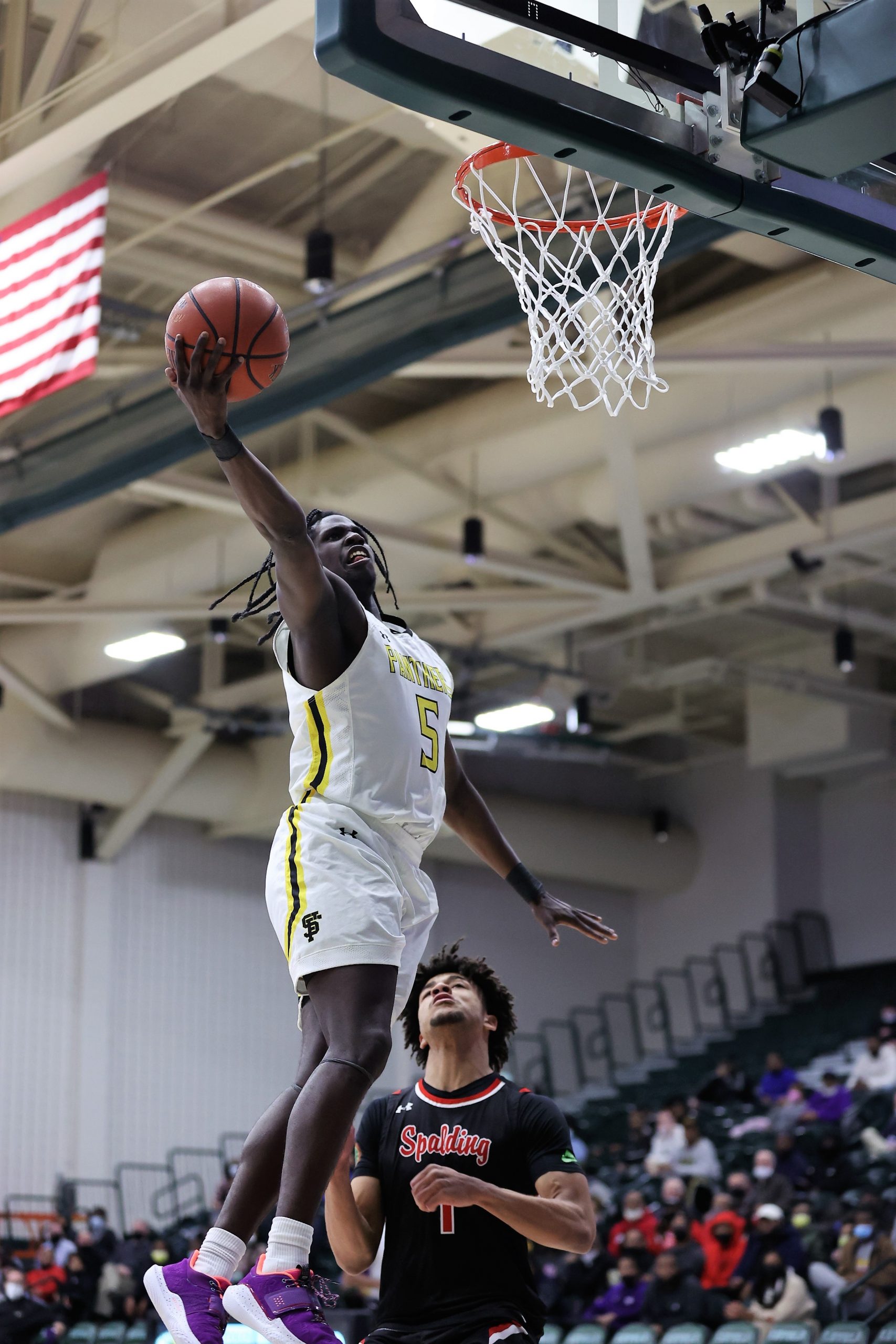 The rivalry that has defined Baltimore boys high school basketball in the 21st century will again decide one of its cherished prizes.

The Panthers gained a fifth straight final with a 76-54 victory over third-ranked Archbishop Spalding in the opener. The Gaels ended No. 4 John Carroll School’s reign as BCL Tournament champions with a 70-63 decision.

St. Frances (33-6 overall) looked like the team that was the area’s best for nearly the entire regular season, as well as one of the nation’s best, using a 21-2 first half to stun the Cavaliers. University of South Carolina commit Bryce Lindsay led five-digit scorers with 17 points and senior post Cortez Johnson added 12 points and 11 rebounds.

“I think the guys defended very well, we did some different things,” said Myles. “We shared the ball today, 19 assists is probably the best stat on the stat sheet. I don’t care who scores, just move the ball and play together.”

Trailing 15-12 late in the first, St. Frances ran off 12 straight points, forcing four turnovers, to acquire a 24-15 advantage in the second period. The run ended with a Spalding basket, but Panthers answered with nine straight, capped with Jahnathan Lamothe, who started to motion for a 3-point attempt then fired a pass to Johnson in the paint for a score and a 33-17 advantage.

The Panthers led, 36-21, at halftime. Spalding itched to within 45-35 with three minutes left in the third, then Carlton Carrington responded for St. Frances with a floater off the baseline. The Cavaliers missed the ensuing attempt and Carrington got the defensive rebound and pass to Tyler Jackson who sent a downcourt pass to Taion Robinson for a layup.

After clinching a record fifth BCL regular season championship, St. Frances lost two of three in the final week of the regular season. The Panthers, who had the best mark in the MIAA A Conference, blew a 21-point halftime lead in a stunning home loss to Gilman School in the quarterfinals.

“We shouldn’t have lost,” said Robinson of the 70-69 defeat. “We just came together, talked to each other. We came out with good energy and got the job done.”

C.J. Scott finished with 16 points for Spalding (25-11), and freshman Malik Washington added 13. Cam Whitmore, who won his second straight BCL Player of the Year honor, had eight points and 15 rebounds in his final game.

It was a disappointing conclusion for the Cavaliers, who were seconds away from knocking off St. Frances Academy in the team’s first meeting in late January. Spalding stumbled in the final two weeks of the regular season with Whitmore, a McDonald’s All-American and Villanova recruit, missing several games with a sore ankle.

Last week, the Cavaliers knocked off then-No. 1 John Carroll School in the MIAA A quarterfinal before fading in the fourth against Mount St. Joseph in the semifinals. Spalding outlasted No. 2 Our Lady of Mount Carmel in Wednesday’s BCL opening round to reach a second straight semifinal.

Their hopes of a first BCL Tournament crown since 2002 were doomed in the first half Friday, shooting nine of 33 (one-for-11 from 3-point range).

“We couldn’t get into rhythm,” said Spalding coach Josh Pratt. “Shots just weren’t falling, maybe the 3-point line affected us…it is what it is, and you got to deal with that. It could’ve been the big stage, it could be a lot of things, but very proud of the kids.

Obviously, I’m frustrated and the kids are frustrated. We all wanted to coach better and play better. I say this all time – rebounds, free throws and turnovers. We got to make our free throws, we got to drive the ball and can’t settle. We missed shots we normally hit…the lead went from four to six to 12. We got here and there’s consolation for that.”

After being a spectator, of sorts, for the BCL final four last year for the first time since 1999, Mount St. Joseph advanced to its record 18th championship with another gut-check effort in the closing minutes. 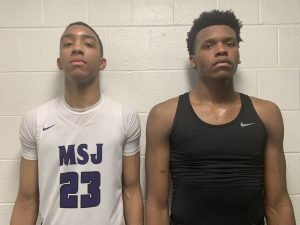 The dynamic duo of Bryson Tucker (left) and Amani Hansberry carried Mount St. Joseph back to the BCL Tournament final. Hansberry had a game-high 25 points and 15 rebounds while Tucker scored 18 of his 22 in the second half as the No. 1 Gaels ended fourth-ranked John Carroll’s reign as tourney champions with a 70-63 victory in the second BCL semifinal Friday evening at Reitz Arena.

Junior post Amani Hansberry posted a double-double, 25 points and 15 rebounds, for the Gaels (30-5), and Bryson Tucker finished with 22 points. Jeannot Basima had a team-best 21 points and seven rebounds for John Carroll.

Trailing 58-57 in the fourth quarter, Mount St. Joseph scored eight straight to capture the lead for good as well as its ninth straight decision. Wednesday, the Gaels needed a fourth quarter rally to force overtime where they were able to banish a feisty Loyola Blakefield squad.

Last Sunday, the Gaels outlasted Mount Carmel in the final minute to win their record seventh MIAA A Conference championship.

“We work on situations and we talk about poise, composure, the value of each possession on both sides of the ball,” said Mount St. Joseph coach Pat Clatchey. “It’s been working out.”

“It comes from missed opportunities in the previous quarters…starting out slow,” said Hansberry. “Fourth quarter, we got to get this win so we got make up those plays, play harder, play with some heart, play with some grit.”

Trailing 58-57, Tucker got a piece of Basima’s layup attempt, and Ace Valentine dropped a short jumper, giving Mount St. Joseph the lead with 4 minutes, 35 seconds left in regulation. After a Patriot miss, Tucker sent a downcourt pass to Austin Abrams in the corner.

Abrams dropped a pass inside to Hansberry, who put the ball off the glass for the score. After another defensive stop, Tucker found an open Hansberry inside for another basket, pushing Mount St. Joseph’s lead to 63-58.

“We trust each other, when one person has the ball like Amani, I trust him,”  said Tucker, who capped the 8-0 run with a drive to the basket. “Anybody who gets the ball you got to trust him.”

Tucker, who recently added Duke to a burgeoning list of early scholarship offers, was just 2-of-12 in the opening half as Mount St. Joseph, down by as many as 10, trailed 30-25 at intermission.

The smooth 6-foot-6 sophomore hit his first four attempts in the second half, part of a 14-4 run, putting the Irvington school up 39-34. John Carroll regained the lead by quarter’s end (52-51) on Tyson Commander’s lauyp with six seconds remaining.

Commander had 19 points and five rebounds for John Carroll (20-11), and Vaughn finished with 13 points and four assists. The Patriots went five minutes without a field goal as their aspirations of a second straight BCL title ended.

“We’ve been focused on our culture all year. We didn’t let things bother us,” said John Carroll coach Seth Goldberg. “They hit a couple of more shots than we did. It was tough, a great game all the way until the end. I’m proud of my guys.”

The Patriots were the lowest seeded team (No. 6) to win the BCL Tournament title last year. Their  Cinderella-esque run to last year’s title started with a win at Mount St. Joseph in the quarterfinals.

“They are our culture, they are what John Carroll basketball will hopefully be as time moves on. I’m super thankful that I had the chance to coach them,” said Goldberg, whose team was No. 1 in VSN’s preseason Top 20. “The saddest part about this moment, not that we’re not playing for a championship, that I don’t get to coach these guys tomorrow.”

After 56 regular season games and six playoff matches, possession of the Brother D. John Smith Trophy comes down to Mount St. Joseph and St. Frances. It will be the fourth BCL Tournament final between the Baltimore City rivals, who have combined for 17 tourney crowns overall, and 16 regular season championships since the start of the 21st century.

The Panthers won both decisions during the regular season.

“They’re a terrific team,” said Clatchey, who will lead his alma-mater for the 14th time to the tournament final (Mount St. Joseph’s 17th overall). “We’re just excited to be back playing in the championship.”

“It’s a blessing…we always wanted to build a program on Chase Street and we have a program ,” said Myles, who. “This is about guys buying in. Two things our program is about is scholarships and championships.”