Here we go; MIAA basketball playoff seeds on the line

With the MIAA basketball playoffs set to tip-off on Tuesday, teams in all three conferences are scrambling to complete their regular season schedules and lock down tickets to the post-season.

Here is a breakdown of what is at stake between now and Tuesday.

The A Conference has two divisions and four teams from each division will enter the single elimination post-season tournament.

Top-ranked Mount St. Joseph, which leads the Black Division with a 12-0 league mark, has the most grueling remaining schedule as it will play four times in four days from Friday to Monday. Fortunately for the Gaels, they enter the stretch undefeated in conference play, and all four games are at home.

In succession the Gaels will host No. 7 Glenelg Country, No. 3 John Carroll, Mount Carmel and Gilman. John Carroll, the second place team in the division is 11-3 in league play, so the Gaels would lock up a top-seed with a win over the Patriots on Saturday. Even if it were to fall to John Carroll, the Gaels can still clinch the top seed by winning any two of those four games, or with one win and a John Carroll loss.

In addition to its Saturday date with St. Joe, at high noon, John Carroll will host Gilman on Friday night. Although the Patriots still have a mathematical shot at the top seed, they are primarily focused on wrapping up the second seed, which they will do with one win or a loss by Glenelg Country.

To move into the second seed, GCS (10-5) must knock off St. Joe on Friday night and hope John Carroll loses both of its games. That would leave the teams tied and the Dragons would own the tie-break. Otherwise, Glenelg Country will enter the post-season as the third-seed.

That leaves Loyola and and Gilman battling for the fourth and final playoff seed from the division. Loyola has just one game left and that is on Sunday at home against the Greyhounds. Gilman has three league games left, but the only one that matters is the one with Loyola.

If Loyola wins that game, it will finish at 6-10 and clinch fourth place. If Gilman wins it can finish no worse than 5-11 which leave it tied with the Dons. At the point, the Greyhounds would have swept the season series with Loyola and thus capture the fourth seed.

Other than the top spot, nothing is quite settled in the Red Division.

No. 4 St. Frances (11-3) has two games to play over the weekend, but the Panthers are secure as the top seed. The remaining three seeds, however, are tightly contested with four teams, all bunched within one game of each other, battling for just three post-season tickets.

Defending league champion Calvert Hall (7-7) is currently in second place and controls its own destiny. The Cardinals, who host Archbishop Spalding on Friday and travel to St. Frances on Sunday afternoon, can lock up one of the spots with one more win.

No. 15 McDonogh (7-8), which appeared to be a lock for the playoffs two weeks ago, has now lost four straight in league play, but the Eagles also control their own destiny. The Eagles are idle until Monday evening when they will host Mount Carmel (6-7), which currently is in fourth place. A McDonogh win sends the Eagles to the playoffs. A loss will subject them to tie-break scenarios with St. Vincent Pallotti, which has completed its league schedule at 7-9, and possibly others.

In fact, the possibility exists that all four teams could end up at 7-9, depending on this weekend’s results. In addition to McDonogh, Mount Carmel hosts St. Frances on Friday and travels to St. Joe on Sunday.

Because the potential combinations and tie-break scenarios are far too numerous to recite, VSN will wait for this weekend’s results to break down how everything shakes out.

In the B Conference, six teams qualify for the post-season, and eight of the league’s 10 teams enter the weekend with playoff hopes still alive.

No. 18 Annapolis Area Christian (13-2) has led the league virtually all season, but a loss to Gerstell Academy earlier this week leaves the Eagles with more work to do to lock up the top seed, as it attempts to hold off No. 20 St. Paul’s (12-4) and St. John’s Catholic Prep (11-4).

All three of those teams wants to finish first or second. Both of those positions provide a first round bye and a home game for the conference semifinals.

AACS still has three games to play, all on the road. The Eagles will be at St. Mary’s on Friday night, at Indian Creek on Saturday evening and in Frederick to face St. John’s on Monday night.

St. Paul’s hosts Friends School on Friday and Archbishop Curley on Monday. In between, the Crusaders have a tough non-conference rivalry game with Boys’ Latin on Saturday.

In addition to its finale against AACS, St. John’s travels to Severn on Friday and Friends on Saturday. 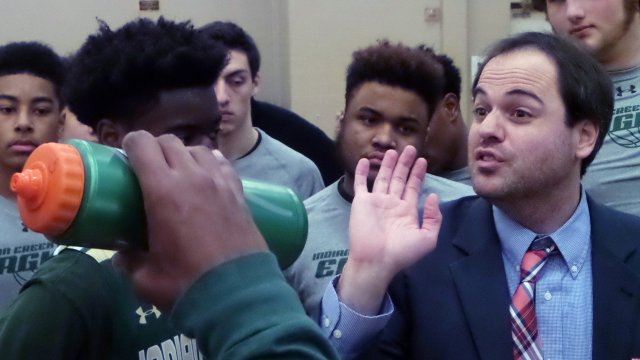 Regardless of what happens this weekend, those three teams, along with fourth-place Severn (10-6) all know they will be in the playoffs. In addition to their home game with SJCP on Friday, the Admirals host Chapelgate Christian on Monday. The Admirals still have a mathematical opportunity to climb into a tie for second place with St. Paul’s and/or St. John’s, but that would require two wins and some help. Two losses could make the Admirals vulnerable to falling back to the fifth seed, which would cost them a home game in the opening round of the playoffs.

Indian Creek (8-8) is currently in fifth and it is the only team still capable of pulling even with Severn. The Eagles, however, still have work to do to lock up their place in the post-season. In addition to Saturday’s game at AACS, ICS hosts Chapelgate Christian on Saturday.

Currently, Friends (7-9) is sitting in the final playoff spot, in sixth place. The Quakers travel to St. Paul’s on Friday and host St. John’s on Saturday, as they attempt to hold off Gerstell (7-10) and Chapelgate (6-9). In fact Friends may have to win one more game to stay alive, since Gerstell owns the tie-break because of a win over first place AACS. One loss by Friends and a Gerstell win over last-place Curley, on Friday in the Falcons final game, would give Gerstell the tie-break over the Quakers.

Chapelgate is also still alive with three games to play. The Yellow Jackets visit Indian Creek on Friday, host St. Mary’s on Saturday and go to Severn on Monday.

Key School (9-0) remains undefeated in the league and with three games to play, the Obezags can lock up the top seed with two more wins. In fact, the Obezags can do it with one win if that win comes on Friday when they visit second place Saints Peter & Paul (7-2). Key also visits Jemicy on Monday and hosts Cristo Rey on Wednesday.

In addition to its date with Key, Saints Peter & Paul hosts Cristo Rey (4-3) on Saturday and travels to Concordia Prep (6-4) on Monday. The Sabres are hoping to hold off both of those teams to lock up at least a second seed and secure a home game for the semifinals.

In third, Concordia can clinch a trip to the playoffs with one more win or a loss by fifth place Park (3-6). In addition to Saints Peter & Paul on Monday, Concordia hosts Cristo Rey on Friday.

Cristo Rey, seeking to reach the post-season for the first time has the most difficult schedule with five games in the next six days. After traveling to Concordia on Friday, the Green Hornets play Saints Peter & Paul in Easton on Saturday, play a pivotal home-and-home with Park (in Brooklandville on Monday and at Cristo Rey on Tuesday) and travel to Key on Wednesday.

In addition to the two games with Cristo Rey, Park hosts Jemicy on Friday, as the Bruins attempt elevate into the top four.

At 3-8 with two losses to Cristo Rey, seventh-place Beth Tfiloh has been eliminated.