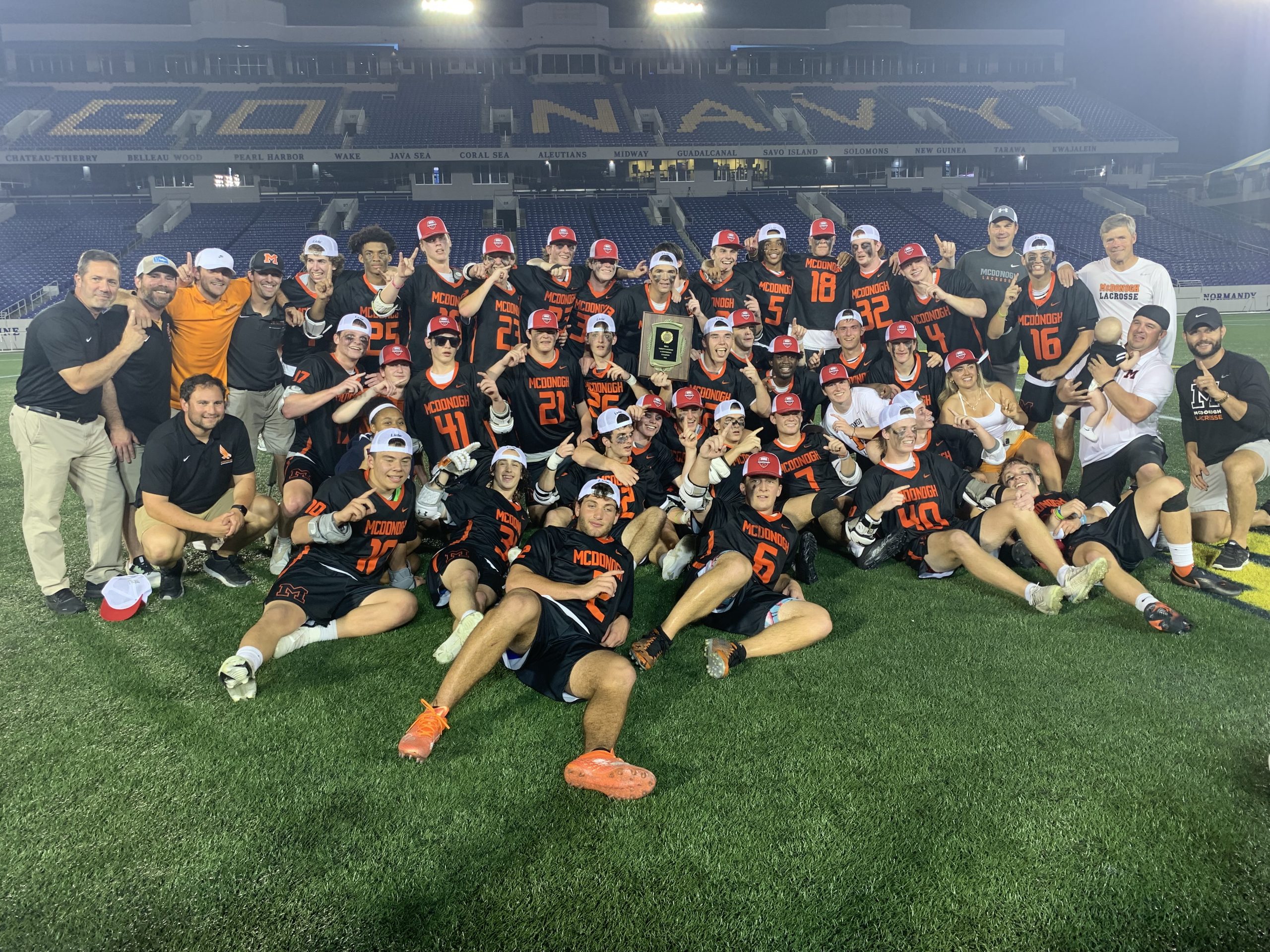 McCabe Millon could be described as a finesse player.

During the fourth quarter of Friday’s MIAA A Conference lacrosse title game, Millon checked a St. Mary’s player, sending his opponent’s helmet, as well as the ball, to the turf at Navy-Marine Corps Memorial Stadium. Millon scooped up the ball, went to the goal and scored.

Millon’s effort was one of several defining plays for the fifth-ranked Eagles, who completed a scintillating run to the title with a 14-8 victory over No. 3 St. Mary’s in Annapolis. 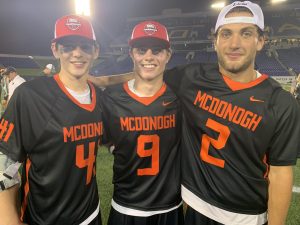 McDonogh, with Brendan Millon, McCabe Millon and Jonny Cool, capped an unlikely run to the MIAA A Conference lacrosse championship Friday. McCabe and Brendan Millon had four and three goals, respectively, and Cool anchored the defense as the fifth-seeded Eagles defeated St. Mary’s, 14-8, at Navy-Marine Corps Memorial Stadium in Annapolis.

McDonogh scored the game’s first five goals, followed by a stern third quarter retort to become the last team standing in the nation’s premier boys lacrosse league for the first time since 2016. The Owings Mills school did it as the No. 5 seed, following Boys’ Latin School’s championship climb last year.

The Eagles’ ascent was unlikely about a month ago. Three losses in four games, including a fourth quarter road collapse against Calvert Hall College and a six-goal lashing by St. Paul’s School at John McDonogh Stadium.

“We got beat by a much better team, St. Paul’s is really good and they got very good at the end of the year. We had to do a lot of introspection after that game because it just wasn’t McDonogh lacrosse and it was a very negative mindset we had that day,” said McDonogh coach Andy Hilgartner about the 10-4 setback. “Again, credit to our players, credit to all our coaches who did such an amazing job of pulling it together.”

Wilson, who will play for Villanova University next spring, answered in his team’s penultimate game, stopping nine shots. The defensive unit, led by seniors Jonny Cool and Malachi Jones, kept St. Mary’s offense silent for nearly the entire first half.

McDonogh, playing its first MIAA A final since 2017, started impressively as Chase Green scooped up a groundball and ran 40 yards before planting the ball in the net, for a 4-0 advantage early in the second. Brendan Millon, the hero in Tuesday’s semifinal win against Boys’ Latin, got a pass from Luke Miller (two goals, assist) and ripped the ball past Saints’ goalie Zack Overend, making it 5-0 in the first 16 minutes.

St. Mary’s finally got on the scoreboard with 1:48 before halftime on Jake Kucinski’s goal. The Saints got some needed momentum as Will Hopkins’ low screecher bounced by Wilson, with just eight seconds left to make it 5-2.

After two of their shots caromed off the pipe early in the third and McDonogh extended the lead to 6-2, the Saints stayed resilient. Chick recorded back-to-back scores, almost from the spot and both from a pass from Kucinski, bringing St. Mary’s to within 6-4 midway in the third. The latter score followed a pair of nifty denials in front by Overend.

McDonogh’s relentless offense broke the Saints. Brendan Millon, whose recent insertion in the starting fold after missing most of the season helped reinvigorate the Eagles, sent a low bouncer into the goal. McCabe Millon followed with a pair of scores to make it 9-4 with 9:44 left in regulation.

Jones, off a restart, sprinted downfield and scored, completing a four-goal McDonogh run.

The Eagles upped it to 12-5 as McCabe Millon, the nation’s top player in the Class of 2023, went fierce with his check and score special.

“That was my first body check in my life,” said McCabe Millon, who’s committed to Duke. “I’m not the biggest guy out there, I usually try to get away with being the fastest.”

McCabe Millon said McDonogh wanted to impose its will from the opening faceoff Friday.

“We were confident in our game plan and really confident in our guys up and down the roster,” said Millon. “We thought if we come out really hot, we’d have a really good chance to come away with it. We cooled down in the second quarter, but came out after halftime firing and had a big fourth quarter.”

Hopkins finished with a hat trick for St. Mary’s, playing in its first final since 2019. Playing down the street from its campus, the Saints, who bested McDonogh in the regular season (7-6), and their faithful were hoping to finish with a championship celebration in the streets of the state capital.

The Eagles crashed the party.

“Getting behind 5-0 early to an A Conference team is a very tough hole to dig yourself out of…the energy it takes to play at that level is very tough,” said St. Mary’s coach Victor Lilly. “We had a couple of opportunities and we didn’t finish the deal, they finished their deal.”

“We’re very proud of what we’ve accomplished,” added Lilly. “We still have unfinished business. We want a trophy here in Annapolis.”

A year ago, McDonogh saw a run at perfection end in the MIAA A semifinals. The Eagles were No. 1 in the VSN Top 20 entering this spring, then lost to Boys’ Latin in the MIAA A opener in late March.

By late April, the Eagles were searching for answers.

“Every negative thing, every obstacle we had to hurdle made us stronger,” said Cool, who will play for Ohio State next spring. “We kept talking about peaking in May, the goal never changed. Everything made us stronger….the journey.”