A good day at the office

In the final seconds of its victory over St. Frances Academy at the Basketball Academy Thursday evening, Poly High’s players jumped off the bench to celebrate a reserve’s basket.

It’s been challenging season so far for the No. 8 Engineers, who closed the opening day of the 21st annual mixer with a 63-43 decision over the 15th-ranked Panthers at Morgan State University’s Hill Field House. In other action, No. 2 Dunbar boys’ held off Randallstown while Poly and Western girls captured victories.

Ayana Brim and Stephie Long each finished with seven points for Mount Carmel (3-9), making its first apperance at the Basketball Academy. Poly improved to 9-2 (since 2011) at the Academy with a 49-41 victory over New Town in a battle of state Final Four squads from last season.

Tied at 11, Poly ran off 10 straight points in the second quarter for a 21-11 advantage. New Town pulled to within five in the second half, but the Engineers were able to keep the Baltimore County school at bay, despite shooting just 14-of-37 from the free throw line (New Town was 14-of-32).

The Poets went on a 10-4 run midway run before withstanding a Ram game-tying attempt at the buzzer. The 11-0 opening is the best for the east Baltimore school since the 2011-12 campaign with 11 straight.

“We’re still not playing perfect, but sometimes you just got to take what you can to get over hump,” said Jones.

Chenery, 6-foot-5, broke a 47-47 deadlock with a short jumper, but the Rams stayed on Dunbar’s heels, trailing 53-51 after two free throws from Yimi Lewis with 64 seconds remaining in regulation. 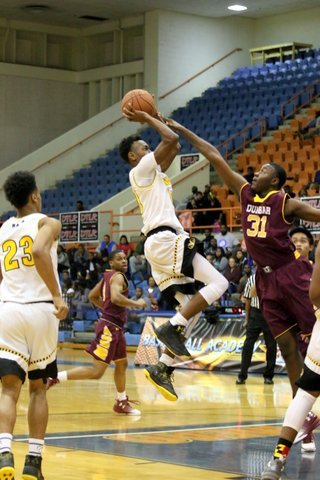 Nasir George’s 3-point attempt from the wing hit off the back of the iron as the buzzer sounded. Makle, a 6-8 senior post, finished with a game-high 23 points for Randallstown, which plays City College Friday afternoon at Hill Field House.

Trent Jones led Central (10-0) with 25 points. Rashad Faust finished with six points for New Town (3-8), which has had no starters back from a team that won a second straight state title (won 2A after claiming 1A in 2015) last season.

“I would be lying if I didn’t say there were some second thoughts playing such a schedule, then I think about the 40-plus college coaches who got to see my team play,” said Poly coach Sam Brand, whose team lost four straight in December to Perry Hall, Philadelphia power Imhotep Academy, New York’s Bishop Loughlin and Florida’s Sagemont. “If you truly believe in your team, your coaching staff..the reason not to do it is to avoid a low-seed in the playoffs and I don’t think that sacrifice is worth the experience these guys get.”

“It’s been real rough, senior season taking the type of losses we’ve taken, but it’s a pretty good schedule,” said Perry, whose team lost in overtime to No. 1 Mount St. Joseph at the beginning of the season. “Us struggling and fighting through the adversity has made us closer. Tonight, we were hungry for a win.”

Poly imposed its will in the paint and was able to get transition baskets as Perry, 6-6 and 6-5 Demetrius Mims finished with crowd pleasing dunks. But it was Jones, a 5-10 junior reserve guard, who ignited the Engineers.

Trailing 30-29 in the third, Jones buried back-to-back 3-pointers, giving Poly a 35-30 advantage with 1:38 left. After sophomore post Amani Walker closed the third with a basket, freshman point guard Rahim Ali opened the fourth with a jumper and Perry got a 3-point play off a powerful baseline finish.

“The schedule we’re playing is preparing us,” said Jones. “It gives us confidence to complete with anybody and we have confidence in each other.”

“He’s guy who developed the last three years.  said Brand. “We got faith in him and he has faith in himself.”

Penn finished with 17 points for St. Frances (6-10), which is undergoing growing pains after graduating the backcourt of Kurk Lee (Drexel) and Daquan Bracey (Louisiana Tech) last season. The Panthers are at Mount St. Joseph Friday night then take on Chicago’s Morgan Park at Poly Saturday.

The Engineers will take on Chicago’s Simeon Saturday evening in the nightcap of the Charm City/Windy City Shootout. Simeon is ranked No. 8 nationally by USA Today.

“They’re pretty good from what we’ve seen, but everybody’s beatable,” said Perry. “We have to stay hungry and stay undefeated in our house.” 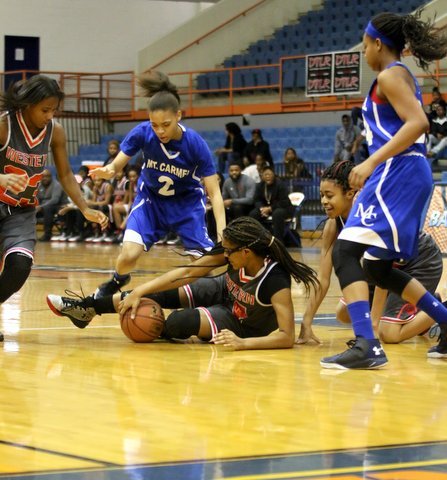 Going to War on the Shore