Going out on top

As Lou Eckerl told baseball-savvy writer Pat O’Malley a couple of years ago for a VSN video interview, the longtime Calvert Hall College High School athletic director and baseball coach would know when the time was right to retire.

Last week, Eckerl, 70, announced that he would make it an even 40 years as AD —not to mention 22 seasons helming the varsity baseball squad — when his “Golden Years” officially begin following the current school year. 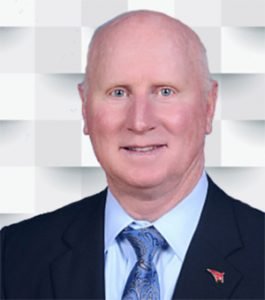 Calvert Hall president Brother John Kane said that Eckerl was a terrific administrator and an even better man.

“You can certainly point to the wins and championships Calvert Hall has won during Lou’s time,” Kane said, alluding to the MIAA A Conference football and soccer titles the Cardinals earned in the fall. “However, the greater and more important barometer is the care he has had for his players and all our student-athletes during his tenure. The mark of a Lasallian educator is touching the hearts of your students. Throughout his entire career, Lou put our students first. We are indebted to him and will miss his presence greatly.”

Although he was already well-versed in the art of being an AD at his alma mater, the now-defunct Cardinal Gibbons High School, Eckerl was looking for a bigger challenge when he migrated to the Towson all-boys Catholic school in 1982.

Calvert Hall had advertised for a successor to Brother Tom Miller, who had only been in the position for a year after taking over for the legendary Augie Miceli.

Having played football for former Calvert Hall star Bob Patzwall at Gibbons and having coached the sport with another erstwhile Cardinal gridiron great, Denny Cox, at John Hopkins University, Eckerl felt comfortable applying for the job.

He was 30 years old and eager to succeed, something he accomplished with hard work and diligence.

“I told (Calvert Hall principal) Br. René Sterner, FSC, and (vice principal) Lou Heidrick, AFSC, that I would put in whatever time it takes to get the job done,” Eckerl said. “I was never afraid to get my hands dirty to get something done. If (soccer coach) Bill Karpovich needed his field lined, I’d go out there and do it.”

In those days, there were many established coaches at the school, including memorable mentors such as Karpovich, Joe Binder (baseball), Reds Hucht (swimming), Mark Amatucci (basketball) and Miceli, all of whom fielded teams that were consistently vying for championships — and they didn’t miss a beat with Eckerl carefully attending to behind-the-scenes details.

The attention to detail in maintaining 10 sports, 21 teams and 300 athletes that grew to boast 17 sports, 40 teams and 800 athletes during his tenure took a willingness to devote long hours to the programs.

VSN’s High School Baseball Coach of the Decade said that his wife, Carol, deserves much of the credit for allowing him the leeway to do his job successfully.

During his four decades, Calvert Hall has won 300 MSA/MIAA championships at the freshman, junior varsity and varsity levels. 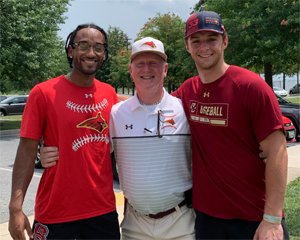 Jose Torres (left) and Parker Landwehr flank Lou Eckerl at Calvert Hall’s baseball camp. Both former Cardinal standouts were captains on the 2019 MIAA A Conference championship team. Torres played for North Carolina State and was picked in the third round of the 2021 MLB draft by the Cincinnati Reds while Landwehr is heading into his junior year playing for Boston College.

He added eight of those on his own — including five in a row from 2005-09 — after taking over in 2002 for Binder, who claimed seven of his school-record 11 diamond crowns with Eckerl as an assistant.

Eckerl, who played football and baseball at Juniata College (Pa.), had also guided Cardinal Gibbons to a championship in 1982, his final season at the West Baltimore school.

“We were pretty good,” said Binder, a Calvert Hall alum who also won back-to-back MSA baseball banners as a player in 1956-57 under Walter Youse. “But when Lou came aboard he put the finishing touches on things. He molded the pitching staff and that allowed me to concentrate on the infield and hitting. Lou was excellent with pitchers and he kept stats, like counting pitches. He had charts, and he would post them so the players could see them. That was another strong suit.

Binder said that no project was either too big or too small for Eckerl to take on, from putting up a temporary fence on the old baseball diamond on Goucher Boulevard to erecting a scoreboard at that site.

According to current assistant coach Zach Rowe, a third baseman on the Cardinals’ 2013 A Conference winners, Eckerl always lets his players know where they stand.

“He’s old-school in that he demands a lot of energy from you and he has high expectations for you off the field,” said Rowe, now a math teacher at his alma mater. “And if you didn’t live up to his expectations, you’re going to hear about it.”

Yet Eckerl is selfless when it comes to taking time for player development.

“When I was learning to play third base, he would hit ground balls to me two days a week for 45 minutes before school,” Rowe added. “And I know he did similar things for others on the team. He’s always thinking about what will make the program better. He’s not into a lot of analytics, but he’s always open to the evolution of the team. He’s a little old school, but he’s always had things like spray charts and tendency charts. And he and (longtime CHC assistant coach) Brookse Kerr have taken a big interest in me learning and developing as a coach.”

Eckerl will be the first to acknowledge that his stint as the head football coach was not nearly as successful, losing all five of his encounters with archrival Loyola Blakefield in the annual Turkey Bowl.

“I guess I learned what I needed to do to win in baseball by losing in football,” he said. “I just didn’t win enough. But I think I left the program in pretty good shape.”

And he kept other programs humming along as well, according to former rival Amatucci, who became like a lifelong buddy to Eckerl after they were baseball teammates at Juniata.

Amatucci gave two examples of how Eckerl conducted himself as a hands-on AD.

“We were going to play (St. Maria) Goretti at Mount St. Mary’s (University) and we were supposed to take the ‘Cheese’ bus,” Amatucci said, using the nickname for the school’s yellow bus. “But it was cold and it had been snowing and we had to go over the mountain.”

Amatucci said he asked the AD to rent a bigger and safer bus for the trip, and was grateful that Eckerl complied.

“It snowed pretty hard on the way back,” Amatucci recalled. “Lou was really good at responding at the spur of the moment. That was no problem for him.”

In another incident, Amatucci had been suspended for the first two games of the Baltimore Catholic League tournament after an altercation with an opposing coach and he stormed into Eckerl’s office to protest the decision by the BCL hierarchy.

“I was throwing stuff around — I was really (angry) — you know how I get. “I said, ‘You’ve got to help me out.’ “Lou just said, ‘Calm down and I’ll see what I can do.’ He made a phone call and got (the suspension) reduced to one game. That’s the kind of guy he is. He’s just an incredible person who will do anything for anybody.”