After rushing out to an early 5-0 lead, Boys’ Latin School had to overcome a late three-goal deficit to force overtime, then used an overtime goal from senior attackman Dominic Pietramala to secure the No. 1 seed for the MIAA A Conference playoffs with a 13-12 victory, ending the Crusaders’ season in dramatic fashion on a beautiful Tuesday afternoon in Brooklandville. 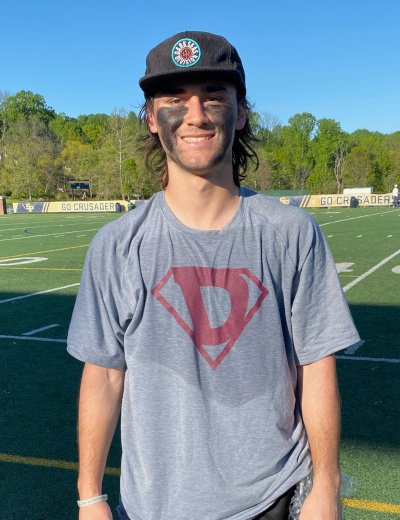 Dom Pietramala scored three goals, including the overtime game-winner, and added two assists to lead Boys’ Latin to 13-12 win over St. Paul’s which clinched the top playoff seed for the defending champs.

Boys’ Latin (13-3 overall, 8-2 MIAA A), the defending league champions, will begin their defense of their crown next Tuesday at Nave-Marine Corps Stadium when they face the winner of Friday’s quarterfinal between No. 4 Archbishop Spalding and No. 5 McDonogh School.

Trailing 5-0 after the first quarter, and facing what looked like a possible blowout loss, St. Paul’s clawed its way back to within 8-6 going into halftime. The Crusaders then used a stellar performance from junior faceoff specialist Daniel Davis (Fairfield), and an impressive display of offensive firepower to dominate the third quarter, building a 12-9 lead going into the final stanza.

That’s when Pietramala took over.

The talented lefty headed to the University of North Carolina, unleashed a barrage of shots from numerous angles, finding pay-dirt with 7 minutes, 27 seconds left in regulation, to pull the Lakers to within 12-10. Pietramala then assisted on goals from senior midfielder Nicky Brown (Jacksonville) and senior attackman Brayden Garland to help the Lakers pull even, at 12-12 with 4:11 remaining.

St. Paul’s zone defense then tightened, providing the Crusader offense with several late-game possessions. Those possessions were squandered by some untimely turnovers, sending this thriller to overtime.

“That’s what good players do. They want the ball at the end of the game,” said Farrell.

Pietramala gathered a pass behind the net, drove left near the top of the crease and found just enough space to get off the game winner from about 12 yards.

He said he had been here before.

“That’s something I’ve done a thousand times, but I’ve never done it on such a stage,” said Pietramala, who credited his teammates for their hard work at practice. “If these guys hadn’t given me the opportunity in practice to do it, then it would not have happened here.

Farrell was pleased with his team’s composure when the pressure was on.

“Highs and lows, guys battling back. We didn’t panic. We kept our cool. We didn’t try to force anything, and we made plays when we needed to make plays. I give a lot of credit to the seniors.”

The defeat to their arch-rival was twice as painful for the Crusaders (11-6, 5-5 MIAA A), who were also eliminated from playoff contention. St. Paul’s finished in a tie for sixth-place with Severn, but lost the tie-breaker because of a loss in their head-to-head matchup with the Admirals.

St. Paul’s coach Steve Settembrino was impressed with his squad’s grit and determination.

“I’m extremely proud of all of them,” said the first-year head coach. “They played with so much heart. They played together. I’m incredibly proud of this group. We played really hard. I’m really going to miss the seniors.”

No. 4 St. Mary’s scored four times in the fourth quarter to erase a 7-5 lead by No. 8 Severn, including the tying and winning goals in the final three minutes, to pull out a 9-8 victory.

Will Hopkins scored four times for the Saints and Jake Adams added three. In addition Nick Golini and Bobby Keane combined for two goals and three assists. The victory allowed St. Mary’s (16-2, 8-2) to claim a share of first place in the league and the second seed in the playoffs.

The Saints advance to the MIAA A Conference semifinals and will play at Navy-Marine Corps Stadium next Tuesday where they could see Severn again.

Despite the loss the Admirals (11-6, 5-5 MIAA A) claimed the sixth and final playoff seed and will visit third-seed Calvert Hall for a quarterfinal game on Friday. The winner of that contest advances to meet St. Mary’s.

No. 1 Calvert Hall College extended its end of season winning streak to six games with a 12-8 win at Loyola Blakefield and will go into the playoffs as the hottest team in the conference.

The Cardinals (13-4, 7-3 MIAA A) spread out the scoring on Tuesday with Truitt Sunderland, Wyatt Hottle and Jordan Wray scored two goals each. Sunderland added two assists and Shuey Kelly had a goal and two assists in the win.

The Cardinals will host Severn in Friday’s quarterfinal round. Loyola (6-9, 4-6 MIAA A), which entered the day with an outside chance at making the playoffs, was eliminated.

No. 6 McDonogh School will go into the post-season on a high note following a 15-8 regular season ending victory over rival Gilman. The Eagles were led by a brilliant 10-point performance form senior star McCabe Millon.

McDonogh (10-6, 6-4 MIAA A) finished as the fifth seed and visits fourth-seeded Archbishop Spalding on Friday in a quarterfinal showdown.

The Cavaliers (12-4, 7-3 MIAA A) were led by Race Ripley’s seven points. He scored four goals and provided three assists. Mikey Weisshaar added three goals and two assists as Spalding wrapped the fourth seed for the MIAA A Conference lacrosse playoffs.

The Cavaliers will host No. 6 McDonogh on Friday in a quarterfinal contest.