Give-and-go, and a win for Gerstell

It was pretty simple for Gerstell Academy forward Ben Higgins when he was designated for the final shot in Wednesday’s MIAA C Conference playoff match with Cristo Rey Jesuit.

“All I had to do was focus and finish,” said Higgins. “It took all season but we got it done.”

Higgins came through, converting a layup as time expired giving the Falcons a thrilling 44-43 decision over the Yellow Jackets. Gerstell, the No. 6 seed, will take on second-seeded St. John’s Catholic Prep in the semifinal round Friday evening.

Junior center Brett McLaughlin scored 18 points for Gerstell (9-9 overall), which lost twice during the regular season. The third time was the charm, thanks to Higgins.

With three seconds left in regulation, Higgins inbounded the ball from the sideline next to Gerstell’s bench to freshman guard Luke Gardner. Gardner quickly sent the ball towards the basket to a streaking Huggins.

Huggins put the ball in off the glass with his left hand, just before the final horn sounded. Falcons coach Sean Todd said his team has been working on the “give-and-go” inbounds play all season.

“We’ve been saving it all year for the right time,” said Todd. “They ran it perfectly and got exactly what we were looking for.”

Todd “thought he messed up” when he called timeout just before McLaughlin scored under the basket. It didn’t matter as Higgins, who helped the soccer team to the C title during the fall, kept the Carroll County school’s hoop title dreams alive.

“We worked on this scenario in practice, but you never know when it’s going to happen,” said Higgins. “I knew I had to make the shot, I missed a couple during the game.”

Kennard Boone led Cristo Rey (13-9) with 15 points amd sophomore guard Terry Page added 11. The third-seeded Yellow Jackets had a 39-34 advantage midway in the fourth after a basket by Boone.

The Falcons responded with six straight points, capped with a steal and layup from sophomore guard Braden Silcott to regain the lead. Page put Cristo Rey ahead, 42-40, with a basket with 2 minutes, 4 seconds left in regulation.

The Falcons were teetering after back-to-back turnovers, but Higgins was fouled as got an defensive rebound with 52.5 seconds left. He converted the one-and-one free throws, tying the game at 42.

Cristo Rey’s Nehemiah Holiday missed a baseline jumper with about 35 seconds left, and senior Steve Snyder got the rebound for Gerstell. After a pair of Gerstell timeouts, McLaughlin missed an attempt in the paint and Page was fouled on the rebound for a one-and-one with 7.2 seconds to play.

Page missed the first and made the second, giving Cristo Rey the lead, 43-42. It would be the last as Higgins’ buzzer-beater broke the heart of the southeast Baltimore school.

“When you give up a lead most of it is defensive execution,” said Yellow Jackets coach Jay Holley. “When you put in the work and it ends on a last second bucket, it’s tough to swallow but they will use it as fuel to come back strong.”

Gerstell Academy, in its second year in the MIAA, will try to do another reverse Friday night in Frederick against defending league champ St. John’s Catholic. The Vikings won 58-45 and 55-43 during the regular season. 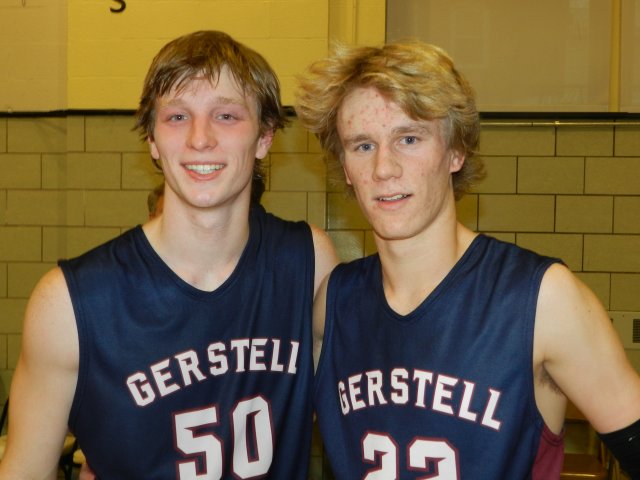 The Falcons are riding a wave of confidence after Wednesday’s thrilling conclusion.

“It’s an unbelievable win, probably one of the most exciting wins I’ve had,” said Todd, who guided the lacrosse team to the C title last spring. “The guys just stayed with it the whole time. I’m excited we’re moving on.”

No. 2 Calvert Hall keeps rolling with a 12-8 win at Loyola in 8 innings

St. Joe breaks up a no-hitter with a 4-run fifth and goes on to defeat Curley

No. 10 Calvert Hall pulls away in the fourth