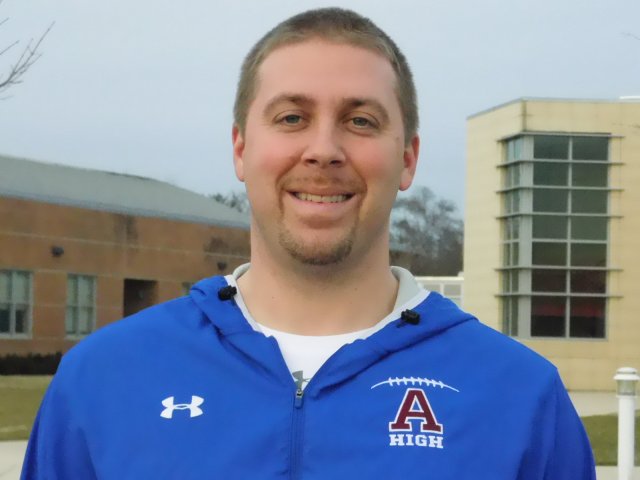 2016 VSN Football Coach of the Year

A former All-Met linemen, Goode-Malloy returned his alma-mater to prominence in the fall. The fifth-year Annapolis coach is Varsity Sports Network’s Coach of the Year.

The Panthers (11-2 overall) reached the Class 4A state semifinals, their first state semifinal apperance since 2000 (reached 3A state final). The Anne Arundel County school finished No. 5 in the final VSN Top 20.

After reaching its first state postseason since 2009 last season, Annapolis built on the momentum, winning its first nine decisions.

“We’re very conscious and delibrate and we talked about expectations with the kids,” said Goode-Malloy. “The biggest part of our culture is the motto: Hit or be hit, but it’s really about dealing with adversity and responding in a positive way.”

In week 10, the Panthers lost to Old Mill in the defacto Anne Arundel title game, blowing a two-touchdown second half lead. Annapolis came back with victories over North Point and Broadneck to win the East Region championship.

The Panthers’ win total increased in each of Goode-Malloy’s five seasons. Their 11 victories this season were the most since 2000 when they lost to Calvert in the 3A state final.

“I’m bias, but Annapolis football is a brand name. We’re in the state capital and play in a very competitive league,” said Goode-Malloy, a 2001 Annapolis graduate. “We want to compete at that state level.”

A four-year starter at Salisbury University, Goode-Malloy coached two seasons at Glen Burnie before assuming the reigns at Annapolis. He’s 29-25 in five seasons at Annapolis (32-42 overall).