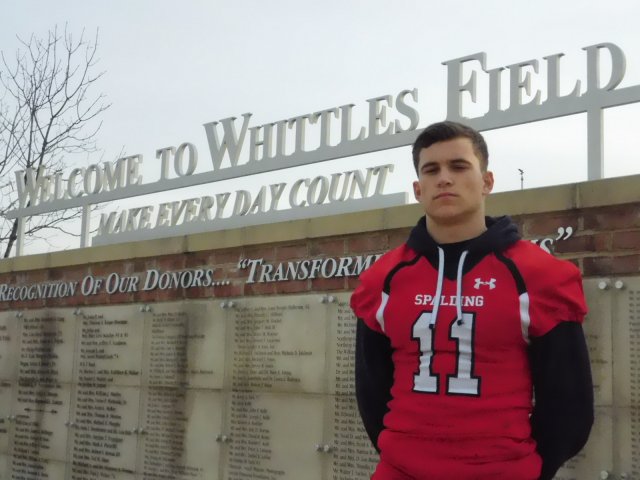 2016 VSN Offensive Player of the Year

The dual threat signal caller produced 2,883 yards and 34 touchdowns for the Cavaliers (9-2 overall), who had their best showing since joining the MIAA A (5-1) in 2010. The Anne Arundel County school also held the area’s No. 1 ranking for two weeks.

“I had a lot of good people surrounding me this year,” said Fochtman. “Our defense played well and the o-line [offensive line] was solid.”

Fochtman was nearly unstoppable in the MIAA A which had all seven teams ranked in VSN’s Top 20 for nearly half of the 2016 regular season, averaging 325 total yards. His best performance may have been in the Cavaliers’ lone area loss against St. Frances Academy.

After a horrendous first half, Fochtman single-handedly rallied Spalding in the second half, throwing for three scores (finished 22-for-31, 227 yards) and rushing for another in a 32-29 decision. The 6-foot-1, 185-pounder completed 128 of 207 passes for 1,747 yards and 20 touchdowns on the season while adding 1,120 yards and 14 touchdowns on the ground.

“We’ve evolved a lot as an offense with Evan. He’s just the smartest player I’ve ever been around” said Spalding coach Kyle Schmitt. “You teach him something once and he picks it up.”

Fochtman is the second Cavalier to win VSN offensive player of the year honors, following Zach Abey (2014), who was the starting quarterback the final two games for Navy this season. Fochtman, a two-time all-MIAA A pick, will join Abey at the Naval Academy next fall.

Loyola soccer is impressive in opener

Early and late gets it done for Gerstell