Gaels get groove back

No. 2 Mount St. Joseph rolls past Kiski; The Hall’s next 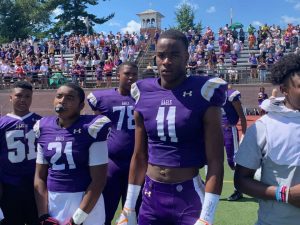 Dont’e Thornton (11) was one of four players to catch a touchdown pass for Mount St. Joseph football team Saturday. The No. 2 Gaels routed Pennsylvania’s Kiski School at Pleyvak Field in Irvington.