Early in the second half of Thursday evening’s MIAA A Conference basketball semifinal between McDonogh School and Mount St. Joseph, Gael senior Darryl Morsell missed a free throw, drawing the “overrated” jeer from the Eagles’ student contingent that filled the stands behind the visitors’ bench inside The Smith Center.

About 30 minutes later, as the Eagle faithful exited after Mount St. Joseph’s come-from-behind victory, Morsell was the last to slap hands with a line of Gael students and leave the court. Morsell and the No. 3 Gaels did get the last laugh in a 54-46 decision over the No. 7 Eagles.

Junior forward/center Jalen Smith finished with 15 and 13 rebounds for the Gaels (31-3 overall) while Morsell, who’s verbally committed to the University of Maryland, scored 10 of his 13 points in the second half. Noah Locke had a game-high 18 points for McDonogh (20-10).

The Irvington school put together a stirring second half to advance to Sunday’s title game against Mount Carmel at Harford Community College’s APGCU Arena. The No. 5 Cougars defeated Calvert Hall College, 66-63, in Thursday’s other semifinal.

The Gaels lost in last year’s MIAA A title game, and has been a source of motivation this season. They leaned on that, as well as their big-game experience to walk down a McDonogh squad that played like Usain Bolt in the first half.

“The coaches were pissed at halftime. We’re better than we played in the first half, and fortunately in basketball you get an opportunity to play the second half,” said Mount St. Joseph longtime coach Pat Clatchey. “The defense was locked in, we got stops, got a chance to run and execute a little better.”

“We came out with more passion,” said Morsell, a 6-foot-5 guard who pulled down 12 rebounds for a double-double.

Tattered for seven 3-pointers in the opening half, Mount St. Joseph limited McDonogh to two over the final 16 minutes. Locke and Jaedon Willis, who combined for 24 points with five daggers in the first half, had a field goal combined in the second half.

“In the second half, we scored,” said Morsell. “In the first half, I think we shot 22-percent from the field and they were able to run off our misses and get shots in transition. We scored in the second half and got back to set up our defense.”

Down 11 at halftime, Mount St. Joseph grabbed a 41-40 lead on sophomore James Bishop’s 3-pointer from the top of the circle to start the final quarter. The Gaels captured the lead for good, 43-42, on Kendall McMillan’s basket with 4 minutes, 24 seconds left in regulation.

McMillan, a junior point guard, scored six of his nine points in the fourth.

“We talked at halftime and made sure everybody was on the same page,” said McMillan, who added two assists. “We just tried to take care of the ball and make stops.”

Locke scored his lone basket with 1:58 left in regulation, bringing McDonogh to within 48-44. The Gaels got a basket from Morsell and two free throws from McMillan for a 52-44 advantage with 59.4 seconds left.

McDonogh, looking for its first MIAA A title game berth, stunned the Gaels, sprinting out to a 17-6 in the first six minutes. The Eagles had a 32-19 advantage late in the second half after Damian Chong Qui connected for their seventh 3-pointer of the half.

Morsell said there was no panic.

“I always tell my guys this is what we do,” said Morsell. “We have a culture of winning so when things get tough, we stick together and find a way to win.”

The Gaels opened the second half with a 12-2 run, featuring eight points from Morsell, who attacked the basket. Smith, who was named the Baltimore Catholic League Defensive and overall Player of the Year earlier in the week, finished the run with a dunk.

McDonogh tempered the onslaught with a 3-pointer from Chong Qui, then Bishop, the Gaels’ sophomore marksman, finally landed a dagger to close the third quarter scoring. He opened the fourth with another dagger, sending Mount St. Joseph student section into a frenzy.

Chong Qui regained the lead for the Eagles with two free throws, but the Owings Mills school went scoreless for nearly five minutes before Locke’s jumper. McDonogh had four field goals in the second half.

“We talked about intensity and St. Joe brought in the third quarter,” said McDonogh first-year coach TJ Jordan. “They came out on the defensive end and we weren’t able to make shots like we did in the first half.”

Mount St. Joseph will try to complete a clean sheet in MIAA A play Sunday against Mount Carmel. The Gaels routed Mount Carmel, 80-52, at the start of February. 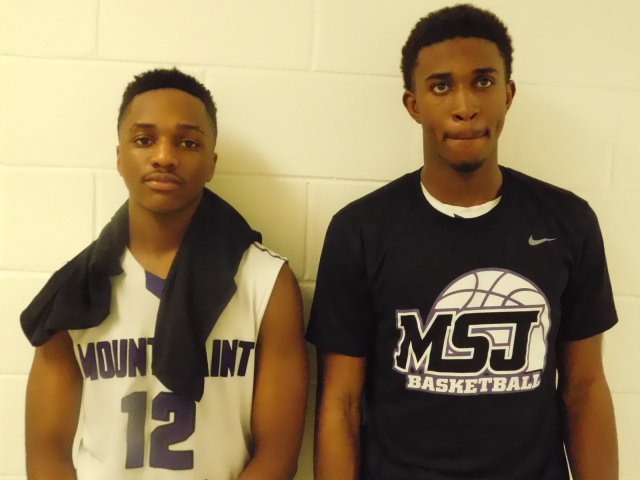 “Coming into the season we wanted to get back there,” said Morsell. “We made it, now it’s our job to get the job done.