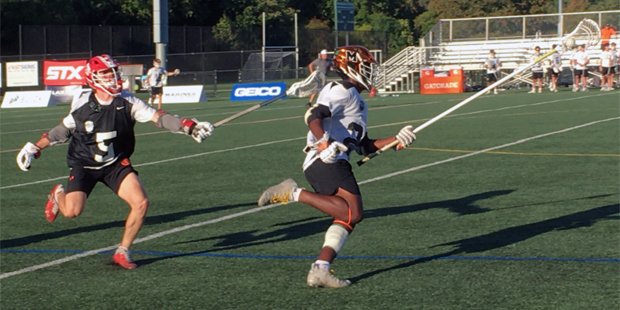 McDonogh defenseman Malachi Jones hustles the ball into the offensive side of the field as Ryan Dunkel from St. John’s (DC) gives chase during the championship game of National High School Lacrosse Showcase at Blandair Park in Columbia on Friday evening. The Cadets from the Washington Catholic Athletic Conference shutout the Eagles in the second half to claim the crown.

Unfortunately for the Eagles, they went up against a St. John’s (DC) squad that was even stingier than they were.

The Cadets blanked McDonogh for the final 24 minutes to claim the title with a 5-2 victory.

The two survivors from a field of 39 teams from 14 states and DC put on a defensive clinic in the contest, with St. John’s clearly in full lock-down mode.

The Eagles, who denied fellow MIAA A Conference rival Calvert Hall in a semifinal, 9-7, earlier in the day, made a game of it in the first half by overcoming a 2-0 deficit to knot the score at halftime.

Rising junior attackman Jack Raley converted a feed on the doorstep from rising senior midfielder/attackman Hugh Brown for the first Eagle tally before rising sophomore Ben Firlie netted the equalizer with just over two minutes left in the first half.

The Cadets, who won the Washington Catholic Athletic Conference championship in the spring and went undefeated (6-0) at the NHSLS, stretched the lead with just under 13 minutes remaining on rising senior attackman Gavin Kelly’s second goal of the game and rising senior midfielder Jon-Luke Duley closed the scoring with just over three minutes to go.

Wilson, though, had the most notable stop when he stuffed Haley with a one-handed save of a quick shot that seemed to be destined for the back of the net after a turnover near the goal mouth.

Although the Eagles were without starting attackmen McCabe Millon and Luke Miller, they still represented the program well by earning a spot in the final round of this prestigious tournament .

“We had some guys missing, but I’m really proud of how we played,” said Wilson, a Villanova commit. “It’s a really super-competitive tournament.”

Travis Holmes, who coached the team to a 4-2 mark during the NHSLS, said that his younger players greatly benefitted from the experience.

“We had some young guys who got a lot of key playing time,” he said. “It was a good test for them.”

In an all-MIAA A semifinal, McDonogh led 4-2 at halftime over Calvert Hall, then extended it to 6-2 early in the second half, behind goals from Lucas Baehr and Logan Green.

The Cardinals, who reached the playoffs with a perfect mark in their pool (3-0 in Blue), rallied. The Hall got to within 7-6 with six minutes left on EJ Vasile’s goal, off a feed from Shuey Kelly.

McDonogh’s faceoff ace Zach Hayashi won the ensuing faceoff and scored, putting the Eagles up two. Green added another tally with less than three minutes remaining, extending the lead to 9-6.

“They’ve (Calvert Hall) been at the top of the food chain for a long time,” Holmes added. “I have a lot of respect for BK (Calvert Hall coach Bryan Kelly) and his program.”

The Cardinals, who defeated Massachusetts’ Deerfield Academy, finished 4-1. Boys’ Latin School, in its first action since claiming the MIAA A title last month, went 3-2, along with Loyola Blakefield. Gilman School finished with a 4-1 mark.