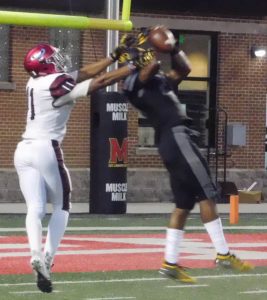 St. Frances’ Jordan Toles has his hands on a pass intended for St. Joe Prep’s Johnny Freeman during the first quarter of Friday’s battle of nationally-ranked football teams at the University of Maryland. The game between VSN’s top-ranked Panthers and Philadelphia’s top team was stopped in the third quarter after several lightning delays.

by Derek Toney
After a drama-filled offseason, St. Frances Academy football team wasn’t able to avoid distractions in its season opener Friday night.
Thanks to three lightning delays, the top-ranked Panthers’ match with Philadelphia’s St. Joseph’s Prep at the University of Maryland’s Capital One Field was called off.  The reigning MIAA A Conference champs led 13-7 with 6 minutes, five seconds remaining in  the third quarter when officials sent the squads to the locker room for the third delay of the evening.
With lightning still flashing around College Park around 10:30 p.m., officials decided the storms were unlikely to stop in time to finish the game.
“If there’s lightning, you have to wait 30 minutes and the clock restarts if there’s more lightning,” said St. Frances athletic director Nick Myles. “It’s got to the point where it’s 10:45 and we’re almost four hours in. We thought it was best for the kids to end the game.”
The game will not be made up and is considered a no contest. The match was considered St. Frances’ biggest test on its national schedule, assembled over the last couple of months after its MIAA A counterparts decided in late spring not to play them, citing safety and competition concerns.
The Panthers, ranked No. 8 in USA Today’s Super 25, showed flashes of brilliance against USA Today’s No. 17 St. Joseph’s Prep. St. Frances overcame a shaky start offensively, getting touchdown runs from Blake Corum and senior running back Joahim Bangura.
The Panthers’ defense took some hits from St. Joseph’s Prep, but produced a goal line stand at the end of the first half.
“I thought we played hard. It was a little sloppy and gave them some opportunities,” said St. Frances co-coach Henry Russell. “I thought we start hitting our groove when the lightning strikes came.”
The Panthers were at St. Joe’s 30, thanks to two Bangura runs and two John Griffin completions, when officials stopped the game for the final time.
It was a far cry from their first possession of 2018 which included two snaps over Griffin’s head and Jake Larson’s knee hitting the turf while fielding a punt snap. St. Joe Prep took advantage of field position (started at St. Frances’ 30) as Kyle McCord connected with Johnny Freeman in the corner of the end zone for an 11-yard touchdown.
The Panthers answered with a Bangura 7-yard score, capping a drive kept alive by a roughing the kicker penalty on St. Joe Prep on a field goal attempt. Junior Traeshon Holden, who started at wide receiver, played quarterback for St. Frances’ second drive and alternated with the freshman Griffin the rest of the way.
“We kind of thought there would be some nerves, big-time game playing at Maryland,” said Russell. “I thought Traeshon did a great job filling in, giving us a different look, making play with his feet. It all comes with experience and John was starting to get confidence on that last drive.”
Russell said he was disappointed the game wasn’t able to be completed, but realized the Panthers have much improving to focus on. St. Frances next plays New York’s Christ the King at Patterson Park this Friday evening.
“It’s going to take some games to come together,” said Panthers junior defensive back Jordan Toles, “but we’ll be fine.”