As we progress towards the regular season, we will countdown our 2013 Enoch Office/VSN Football Preseason Rankings from No. 20 all the way to No. 1.

Outlook – The Cardinals will again be in the chase for the MIAA A Conference championship. The Towson school debut last Saturday with a 17-7 loss to St. John’s College in northwest Washington.

Calvert Hall have back 30 letter winners who helped it to the league finals for a second straight year in 2012. Kuhns, who holds offers from Bryant University, Bucknell, Cornell, Eastern Kentucy, Toledo and William & Mary, returns to guide the offense. Auvil, Beam, Devanney and Harrison are back up front.

Smith and Neverdon highlights the backfield. Neverdon, ranked No. 31 in Rivals.com’s Top 35 seniors in Maryland, is the Cardinals’ most dynamic offensive player with receivers Cager and Nelson potentially ready for breakout seasons.

“The line’s experienced, the quarterback’s experienced, we got a good line coming back, the question is can we run the football?,” said Davis, who graduated Robbie Jones (Flagler College; baseball), Garrett Keene (Morgan State) and Stephen Kelly (North Carolina; lacrosse) from the backfield.

The Cardinals managed just 163 yards in the season opener last weekend. The defense, which showed well against St. John’s, has two of the MIAA A’s best in Tuveson and Smith.

Tuveson, a two-year starter, has a host of Division I-AA offers while Smith had an impressive freshman campaign last fall. Smith, who has more than a dozen Division I verbal offers, moves from the defensive line.

“Right now, we want to see how he does,” said Davis. “He’s really athletic.”

Nickel, Dorsey and Grebeleski is alongside Rahshaun Smith. Davis is excited about Nick Smith, McRae, Austin and Keels, a Bullis School transfer, in the secondary.

The Cardinals have a tough non-league schedule with Florida powerhouse Trinity Catholic (Saturday evening), followed by Baltimore County stronghold Franklin and five-time reigning Washington Catholic Athletic Conference champ Good Counsel, which is ranked No. 1 in the state media poll. Calvert Hall has a late season match with Cecil County-based Eastern Christian Academy, which has a host of Division I commits.

Calvert Hall, which played in the 2012 and 2011 MIAA A league finals after winning the crown in 2010, opens league play against newcomer St. Frances Academy. Six of the league’s seven programs are ranked in VSN’s preseason Top 20. 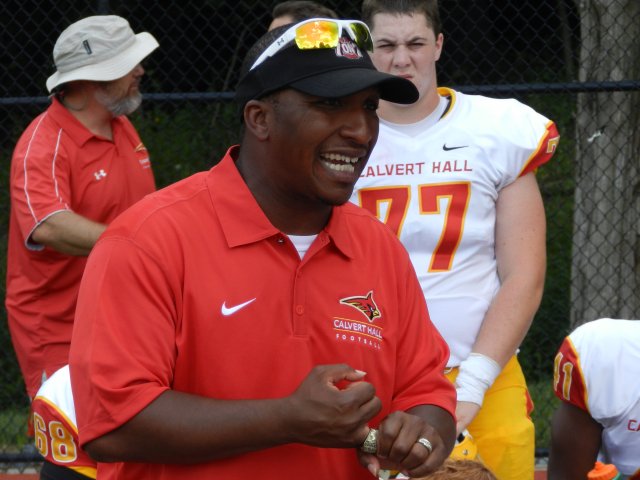 Dons get it done

Young leads Loyola to a victory over John Carroll