Dundalk, Curley and City tangle in a 3-team scrimmage

One of the few treats during a grueling summer football camp is when players get the opportunity to break routines and smack pads with an opponent in a different colored jersey.

Three teams with unfinished business from a year ago did just that Saturday morning on Archbishop Curley’s new turf field, as the Friars hosted Dundalk and City College for a 3-team scrimmage.

Dundalk, of course, stormed out of Baltimore County and all the way to the 3A state championship game during a 12-2 campaign last year. Unfortunately for the Owls, in the state final, they ran into a buzzsaw in the form of Maryland Player of the Year Jake Funk, who scored seven touchdowns to lead Damascus’ to a lopsided win over the Owls.

Despite coming up short in the state final, the Owls grew up as a program in 2015, which gives head coach Sean Sandora something to build on this season and beyond.

“We’ve had good numbers come out. We’ve hit the weight room really hard this offseason and the kids are really dedicating themselves to getting bigger, faster, stronger,” said Sandora. “There is a sense of pride in the program, starting at the top with the administration, all the way down to the faculty. Even the community got behind us and the kids are really buying in.

“It’s a great thing what we did for Dundalk last year, but it’s a new season and we’re just looking forward to it.”

One player who was in the middle of all of last season’s success is senior quarterback Darrius Sample, an electrifying playmaker. Sample says the Owls have only one goal.

“We want to go back there, definitely,” said Sample. “We started in practice. We have a young team, but I feel our team can be the same as last year’s team. We just need more effort, starting in practice.”

Host Curley is also coming off a loss in its championship game, losing the 2015 MIAA B Conference title game to John Carroll, after winning the championship in 2014. 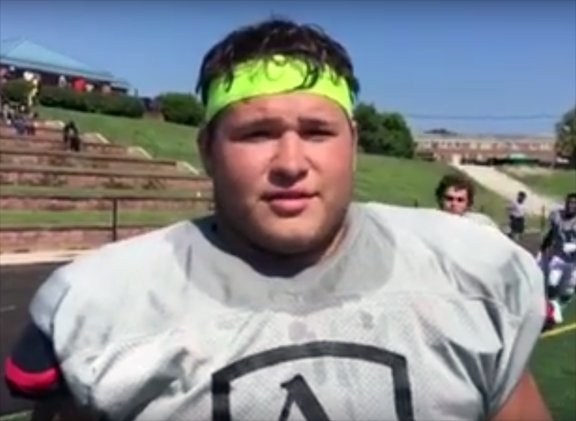 Curley head coach Sean Murphy, entering his 20th season with the Friars, certainly understands what it takes to get to and win the B Conference final. He has led Curley to three straight appearances in the championship game and the Friars have won five titles during his tenure.

On Saturday, Murphy did not gaze too far down the road. Rather, he focused on the excitement of starting a new season and a big addition for his program.

“It’s great. First off, just to have a new turf field. Of course our kids are excited, our coaching staff is excited, and our school is excited,” said Murphy.

With Curley still looking to solidify a handful of its starting positions, Murphy also spoke of the quality work his club was about to receive from Dundalk and City.

“Dundalk is going to be a great challenge. They probably have one of the best quarterbacks in the Metro area. City is always very good so I think these are going to be two really, really good looks for us and we will get a gauge of where we are for the coming season.”

Senior Vinnie Schaffer is expected to be a force in the middle of Curley’s defensive line. He spoke of the adjustment involved with practicing on the school’s new field.

“It took some adapting to get used to it with the heat, but now we love it,” said Schaffer. “It’s going to be great. We look like we have a strong team out here and just to be able to start it up on our new turf field is going to be very nice.”

City is now in its second season under head coach Darryl Wade, who took over last year for the legendary George Petrides, who led the Knights for the previous four decades.

After a slow start the Knights closed strong in a 5-5 campaign, last fall. The highlight was a 42-6 whipping of arch-rival Poly, the second most lopsided score in the long and storied history of the rivalry. Wade hopes to build upon that finish and deliver a winning record in 2016. 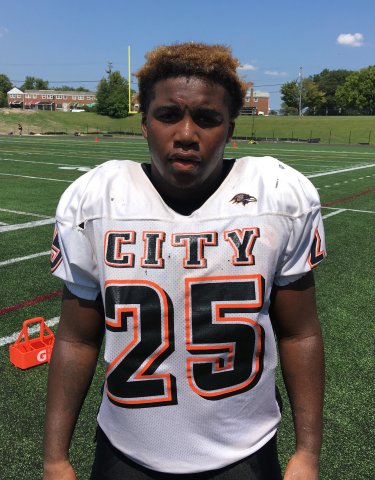 “It was a decent start, a lot of work for the young fellas,” said Wade of his team’s strong showing against the Owls and Friars. “We’re just getting started. We have a lot of things to work on, we have some time, but it’s coming together.”

A key returner for Wade is junior running back Jamaine Jetter, who rushed for 107 yards and two touchdowns in last year’s win over Poly. He sees the improvement the Knights are making.

As far as the scrimmage was concerned, all three coaches were more focused on evaluating their players and fine tuning their systems then they were with winning, as each team put its first unit offense and defense out for rotating 12 play series against the other two opponents. For the record, the Curley offense scored a touchdown against both Dundalk and City. City scored on the Curley defense and Dundalk did not score on either team.

Of course, keeping score and striving for wins will come soon enough. Curley will kickoff its regular season next Saturday (2:00 p.m.) at home, as the Friars host the WCAC’s Bishop O’Connell.

Dundalk and City both get started on the following Friday (Sept. 2). The Owls will open at home in a 6:00 p.m. matchup with Kenwood and the Knights will also have a home opener, facing Friendship Academy (FAET) at 3:45 p.m.