During Saturday’s Public vs. Private boys’ basketball showcase at Baltimore City Community College, a DJ often said “He’s getting warmed up,” after a player scored.

In the case of Adrian Baldwin and St. Frances Academy, they were ablazed. The Panthers defeated No. 7 Woodlawn, 89-53.

St. Frances pulled off its second Top 10 upset in less than 24 hours, thanks to a huge performance from Adrian Baldwin. The freshman guard hit seven 3-pointers en route to a game-high 30 points.

Though the Panthers were eliminated from MIAA A Conference playoff contention earlier in the week, St. Frances coach Nick Myles said his young team has progressed.

“This group has complained the less and worked the hardest,” said Myles. “Through all the losses, we’ve competed.”

“I believed in my teammates,” said Epps, who scored 15 of his 17 points in the second half Friday. “I told them to keep fighting til the end.”

The Panthers carried the momentum into Saturday, building a 47-21 halftime lead. Woodlawn closed to 50-32 to start the third, then Baldwin came to life.

The 5-foot-10 freshman, who scored the winning basket in St. Frances’ victory over Chicago’s Morgan Park a few weeks ago, hit back-to-back 3-pointers, extending the lead to 56-32. The Panthers led 71-42 after three as Baldwin hit four 3-pointers in the period.

Baldwin continued his torrid stroke, adding two more 3-pointers, giving St. Frances an 80-47 lead midway in the fourth. The Panthers led by as many as 40 points.

Penn had 20 points, 13 in the second half Friday against Mount St. Joseph, which led 20-8 after the first quarter. Darryl Morsell had 17 points for the Gaels, who didn’t have 6-foot-9 junior center Jalen Smith in the second half because of a sore heel.

The Panthers close their regular season this week against McDonogh School and John Carroll School. St. Frances will be on the road for a Baltimore Catholic League quarterfinal March 2.

In a matchup of Top 20 squads, No. 1 Patterson got another huge performance from Marvin Price as the Clippers handled 11th-ranked Glenelg Country School, 60-42. Price, a 6-foot-5 sophomore transfer from DeMatha Catholic, totaled a game-best 26 points.

The victory clinched the top-seed in the upcoming Class 2A North Region playoffs for Patterson, which lost at Poly in overtime Tuesday. After a lackluster showing Friday against Mervo, Clippers coach Harry Martin was pleased with his team’s showing Saturday.

“I thought maybe we were hitting a wall, but today we came out with a lot of energy,” said Martin. “We were able to play man-to-man against them and spread the floor and they had a hard tough covering Mungo and Price.” 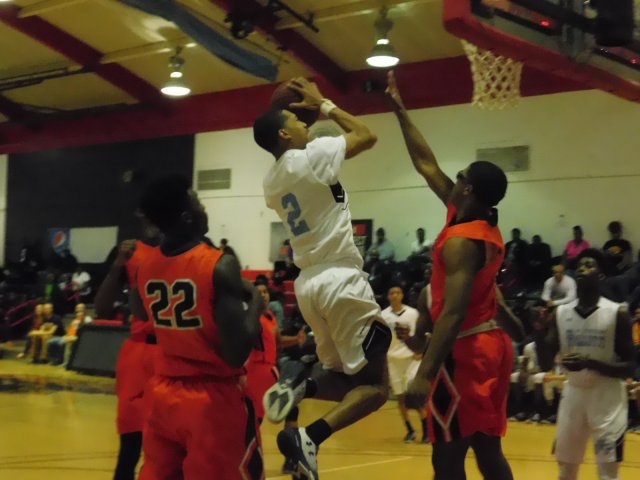 In the nightcap, Poly took over in the second half en route to a 55-40 victory over St. Vincent Pallotti. Senior forward De’Vonde Perry tallied a game-high 23 points and Demetrius Mims added 13.

The defending Baltimore City Division I champ Engineers outscored the Laurel school, 37-19, over the final two quarters to win for the third time in four matches this season against MIAA A programs. Poly’s lone loss was an overtime decision to then-No. 1 Mount St. Joseph at the William Wells Classic at UMBC on the opening weekend of the regular season.

“This was a trap game. I thought our guys came out kind of flat, but we were able to impose our will,” said Brand, whose team has won eight straight. “At halftime, I wasn’t pleased with our performance but I felt like we were going to win the game.”