The No. 9 Greyhounds opened their 2016 campaign with a 21-2 victory over Dunbar in a non-league special in front of a capacity audience of 1,000 at Sugar Cain Field in east Baltimore Friday evening. Senior Zachary Jones and junior Brandon Madison each scored a touchdown for the Greyhounds (1-0 overall) and junior defensive linemen Alex Slodzinski had three quarterback sacks.

Buoyed by a stingy defensive effort, Gilman won its 11th straight decision (longest current win streak in area) and the first for new coach Tim Holley. Holley, the longtime athletic director and former two-sport standout in the mid-1970s at the Roland Park school, succeeded Biff Poggi, who stepped down in January.

Poggi, currently a consultant on the University of Michigan football staff, won 12 MIAA A Conference titles in 19 seasons and made the Greyhounds nationally-regarded (13th in USA Today’s Super 25 last season). Several of Poggi’s assistants moved to St. Frances Academy and more than two dozen players graduated and or left the program.

“We had phone calls in February asking if we’re going to have football,” said Holley. “We’ve been playing football since 1902.”

“For the guys who stayed we took it as a challenge,” said Greyhound senior punter/defensive back Drew Ehrlich. “We’re here to prove a lot of people wrong and prove Gilman football isn’t dead by any means.”

The “resurrection” was led by the Greyhounds’ defense which held the Baltimore City public powerhouse Poets without a touchdown for the first time in a regular season contest in at least two decades. Senior linemen Jake Brummett recovered a fumble in the end zone, John Mandel recorded a sack and Jeremy Cranston added an interception.

“He dissected them [Dunbar] pretty well. One of the things we’re doing this year under his leadership is the kids are calling the defense on the field,” said Holley. “It not only allows them to understand the plays but the concepts. They’re making adjustments and judgements on the field based on what they’ve been taught about the opposing defense.”

The newest chapter in Gilman football got off a great start as Ehrlich recovered Da’Shawn Darien’s fumble on the first play of scrimmage. After being stymied by Dunbar’s defense the first couple of series, the Greyhounds’ offense broke through.

Brandon Willis went 37 yards off a screen pass from junior quarterback Purnell Hill, putting Gilman inside the Poets’ 20. Four plays later, Jones got the corner of the end zone from two yards out.

A bad Dunbar (0-1) punt snap gave the Greyhounds good field position, but the reigning MIAA A champs weren’t able to take advantage. Ehrlich put a punt inside the Poets’ 4. The next play, Darien wasn’t able to field quarterback Jared Lewis’ sweep pitch and Brummett fell on the ball in the end zone, putting Gilman up 14-0 with 9 minutes, 16 seconds left before halftime.

The Poets assembled their best drive of the opening half, advancing from their 21 to the Greyhounds’ 12, but on 4th down, Mandel brought down Lewis. Dunbar’s defense was equal to the task Friday as senior Christopher Bazemore recovered Hill’s fumble early in the second half.

Lewis, a transfer from St. Frances, used his legs and arms to get the Poets’ to Gilman’s 4. Slodzinski got his third sack and the Greyhounds stopped Dunbar on 4th-and-9.

“They have a lot of speed and lot of athletes, and we really did a great job containing them down field,” said Ehrlich.

The Poets got their first points of 2016 as senior Avery Thurman stopped Brandon Madison in the end zone with 9:27 left in the fourth. Dunbar got the ball back off the free kick, but went three-and-out.

Madison got a screen pass from Hill and streaked down the sidelines for a 70-yard score, putting Gilman up three scores. The Greyhounds only had 150 yards Friday with an entirely new offensive set and a line that returned only junior tight end Thomas Booker.

“We really embraced the challenge that Coach Holley and the staff gave us,” said Madison, who finished with 96 total yards.

In the post-game huddle, Gouline presented Holley with the game ball. Forty years ago this week, Holley embarked on hs final football season as a Gilman student. 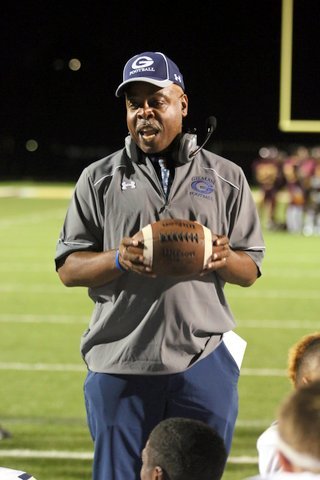 Our t-shirts say ‘Be your best self,’ and the kids played with great poise, character and focus. At the high school level, that wins a lot of games.”

Eight local lacrosse squads to compete this weekend in the NHSLS