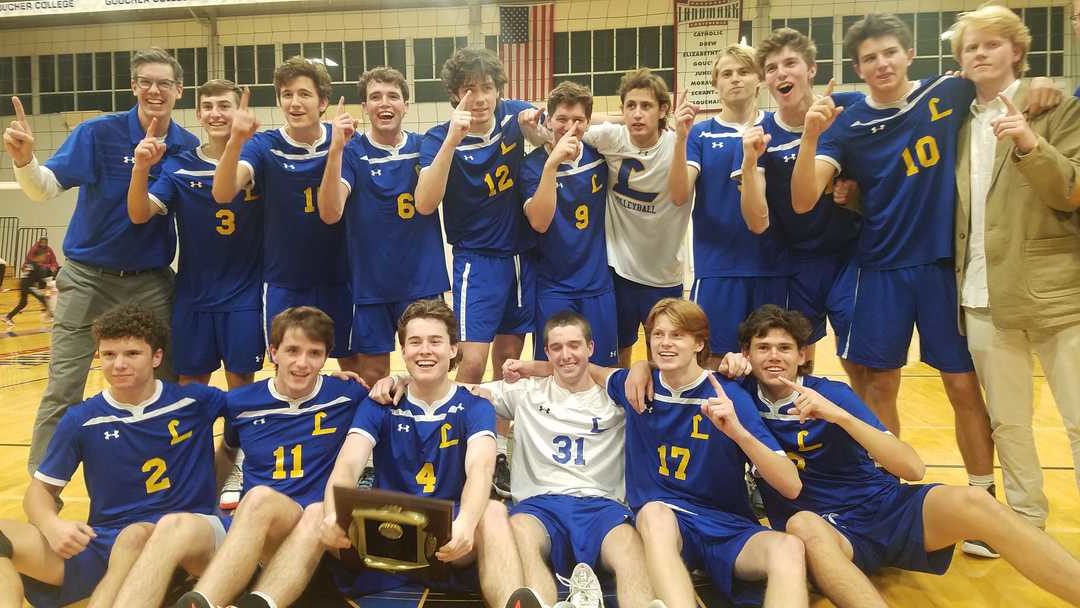 Kirk Moessbauer wasn’t 100-percent during Friday’s MIAA volleyball championship match, and there was almost nothing that was going to keep the Loyola Blakefield senior off the court.

“It’s always great to beat Gilman because they are a top program,” Loyola coach Tim Baier said. “They have a great coach, their guys fight super hard and it’s always a great match. It feels good to win this one.”

The Dons (15-3 overall) got solid performances across the board,  but it was Moessbauer who embodied Blakefield’s resiliency Friday. Early in the opening set, he hurt his ankle while trying to contest a shot at the net.

Moessbauer limped off the court and returned towards the end of the set, but appeared to have some discomfort. He finished with 11 kills and 2 blocks for the Dons.

No pain. No gain.

“I wanted to be careful, but also stay aggressive,” Moessbauer said. “I just trying to work my around the block and make plays. I’m a little hurt, but I’m happy that we are champions.”

James Connelly had a team-high 14 kills for the Dons and Tucker Moore had 10 kills. Gilman was led by senior Wallace Halpert with 16 kills and Halden Ginsberg chipped in with 12 kills.

Gilman (14-5), who defeated top-seed Mount St. Joseph in the semifinals, took control early in the first set Friday, getting two kills from Owen Holmgren, and an ace from Halpert in route to an 8-4 advantage. The Greyhounds maintained their 4-point lead for the majority of set, but the Dons were able to close in late.

A Tucker Moore ace, kills from Clay Anderson and Connolly along with a Greyhound error knotted the set at 23-23. Holmgren and Jordan Foster (seven kills) ended the Loyola rally with back-to-back kills to take the first set.

“I wasn’t worried after we dropped that first set, I knew that we could get back on track and when you have a really good senior core, that can really drive you,” Baier said.

Moore and Moessbauer helped get the Dons off the right foot in the 2nd set with a couple of kills and blocks to start the second. With Loyola holding a terse 18-16, Mossebauer helped spark a 6-0 run with 2 kills and Moore added another to seal the set.

“We just kept playing hard and not letting up, they are a good team, but I knew we could push through,” Moessbauer said.

The 3rd set was tightly contested. Gilman got even at 18 after a kill from Halpert, but Moore and Connelly took over for the Dons, who scored 7 of the last 8 to claim the set. The Roland Park school went on an impressive 17-4 run in 4th set and cruised to the title.

In winning their first title since 2015, the Dons now a league-best 8 volleyball championships. Gilman, looking to become the first team since Calvert Hall College (1999-2002) to roll off 4 straight tiles, has 6.

“It was a tough season. @e got better as the year went along but we just couldn’t finish it today,” Gilman coach Diego Matorras said. “Give a lot of credit to Loyola, they played well and just couldn’t overcome what they were doing tonight.”