Cruising through what he anticipated to be a record-breaking senior year, Calvert Hall’s Nick Delp suffered a potentially career threatening injury during his team’s spring break trip to Florida in early April, when he fouled a bunt attempt into his face near his left eye.

Just two wins shy of tying a school record for career wins on the mound, no one was sure if Delp would pitch again, much less return this season. It took nearly a month, but the gutsy right-hander returned in early May and, Monday, tossed a masterful one-hitter to tie Andy Bair (1995) with 21 career wins at Calvert Hall, as the Cardinals defeated Gilman, 10-0, in the MIAA A Conference Baseball Tournament.

Second-seeded Calvert Hall (22-8) will now face top-seeded Archbishop Spalding (22-3) on Thursday in Severna Park as the two top seeds battle for the first spot in the tournament finals at Ripken Stadium. Spalding advanced with a 13-2, five-inning, win over Mount St. Joseph (16-10), in the other winner’s bracket contest.

“It means a lot to tie Andy, and the people that have been at Calvert Hall before me, but I am not going to think about it right now,” said Delp, who improved to 5-0 in 2015. “I’ve got my eyes on the prize (championship game).”

Shortly following the injury it was feared that Delp may have fractured his jaw and suffered damage to the eye socket. Once the swelling went down, however, doctors determined that surgery would not be required, which opened the door to Delp’s return.

After getting in a few games and collecting a win, Delp went to the hill for the biggest game in the Cardinals’ season thus far and was as good as he has ever been. With plenty of support from his offense, Delp settled in and mowed down a slugging Gilman lineup with relative ease.

Calvert Hall manager Lou Eckerl agreed that Delp appears to be back in form.

“We were really on pins and needles to see if he was OK. It was very scary to see him get hit in the face with the ball,” said Eckerl. “He was out for three weeks, but everything turned out well and he’s back in stride.”

The only base hit he allowed was a slap hit to right-field by Alex Mardiney, with two outs in the second, which barely eluded Cardinal first-baseman Jeff Jones. One other runner reached on an infield error and Delp allowed back-to-back walks with one out in the fourth.  He only struck out one batter, but Gilman did not square up a single ball. Of his 14 other outs, 10 came on infield grounders and four on lazy fly balls.

Early on Calvert Hall played small ball to break on top, before unleashing some extra-base power as the game progressed.

In the bottom of the first inning, the Cardinals got on top with an unearned run. Leadoff hitter Jack Finn chopped a ball to third which Gilman’s John Fitzgerald overthrew at first, allowing to Finn to reach second. He moved to third on a sac bunt by Alex Kriss and eventually scored on a sac fly by Ian Elliott. The Cardinals had a chance for even more against Greyhound freshman starting pitcher Max Costes, but Costes was able to wiggle out of a bases loaded jam with minimum damage.

The Cardinals, however, kept coming. 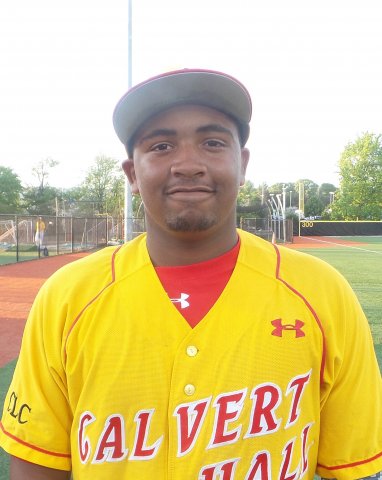 In the second, the Hall tacked on another run, again using the sacrifice efficiently after second-baseman Gabriel Nieto leadoff the frame with a double off the left-field fence. Nieto moved to third on a sac bunt by Daniel Torres and then scored when Kriss lofted a sac fly to right.

The Cardinals broke open the game in the third, scoring six more runs and driving Costes from the mound. Jones, Elliott and Mike Finn had consecutive hits to start the inning. Jones scored on a wild pitch and Elliott crossed on a base hit by Tyler Little. Little was the final hitter faced by Costes, as Michael Willis came on to pitch for Gilman with runners on first and second and one down.

Willis surrendered two more hits and two walks, as well as four more runs, before getting out of the frame. Nieto had a RBI single before Torres and Jack Finn had RBI walks with the bases loaded. Kriss then collected a RBI single and Jones had a sac fly to drive in the eighth run.

Brandon Dorsey capped the scoring with a mammoth two-run home run in the fourth inning, before Delp wrapped up things with a 1-2-3 fifth.

“We were just explosive. We were working all week just to square up the balls and we just hit it great,” said Dorsey, who said his home run came on an up and in fastball.

Eckerl believes his team is playing its best baseball of the year at just the right time.

“Things went very well for us. You hope that you peek at the end of the season and I think that may be the best game we played this year,” said Eckerl. “We had a solid team effort, great hitting, good defense and outstanding pitching by Nick.”

Third-seeded Gilman (16-8) was scheduled to play next on Wednesday, at home, but that contest will be delayed until Thursday because of a protest that was upheld in the John Carroll/Archbishop Curley game. John Carroll won the game that was completed, 2-1, on Monday, but Curley protested an umpire’s call that disallowed what Curley believed to be a game-tying run in the top of the sixth inning. The MIAA upheld that protest and now that game must be completed on Tuesday, with team’s tied 2-2 heading into the bottom of the sixth.

May 18
Finals at Ripken Stadium (If Necessary)

Boys’ Latin continues to dominate in the B Conference

St. Joe soccer is a legitimate threat in the MIAA A