The visiting Archbishop Curley Friars remained unbeaten in the MIAA A Conference baseball, as they topped host Calvert Hall, 3-2, behind the strong right arm of Ryan Edmonds at Carlo Crispino Stadium in Towson on Monday afternoon.

Edmonds threw a complete game 4-hitter to raise his record to 3-0 for Coach Joe Gaeta. 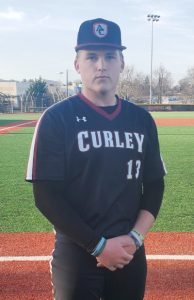 Ryan Edmonds improved to 3-0 on the mound in Curley’s 3-2 win over Calvert Hall.

No. 3 Calvert Hall (9-4 overall, 4-2 MIAA A) grabbed 1-0 lead in the bottom of the first, when catcher Lamar King singled home leadoff hitter Jake Butler. Butler had reached first when he was hit by a pitch to start the frame, stole second, and moved to third on a wild pitch, before scoring on King’s base hit.

Curley answered with two runs in the top of the second, thanks to the continued hot hitting from John Petryszak and Zach Gaeta.

Petryszak tripled to lead off the second for No. 5 Curley (12-4 overall, 5-0 MIAA A) and immediately scored on a clutch Zach Gaeta single. The Friars then took a 2-1 lead on a Cardinal miscue. James Gladden, pinch running for Gaeta, moved to second on a walk, advanced to third on a fielder’s choice, and scored on a throwing error.

The Friars made it 3-1 in the third when Harry Middlebrooks lead off the inning with a ground single to left. The speedy Middlebrooks stole second and then came all the way around to score what proved to be the winning run on line-single to center by Petryszak.

King blasted a monsterous 370-foot solo homer in the Cardinal fourth to cut the Curley lead to one, but Edmonds shut the door from there.

“He throws the ball hard, he kept it down, he kept us off balance, and he pitched out of trouble,” said Eckerl. “He did a great job and he deserved to win. We took too many third strikes, and we didn’t put the ball in play. We were one hit away a couple of times, but we made a couple of mistakes in the field, and in big games like this, the team that makes the fewest mistakes, wins. It was a great game; both teams were in it until the very end.”

Curley coach Joe Gaeta talked about why the Friars are off to such a good start.

“We have a lot of good senior leadership,” said Gaeta. “These guys are three and four year starters, and they are coming to the forefront. We have some young guys that are coming through, and it’s a total team effort.”

“Ryan is truly showing why he is one of the best righty’s in the state. He’s determined, there’s no getting him out of there, and he”s going to get it done.” Gaeta also raved about Petryszak, who had two doubles and four RBI’s in a Curley win over Mount St. Joseph on Saturday.

“He’s seeing the ball really well. He is getting up with runners in scoring position, and it’s paying off. He has been driving in some big runs for us.”

Petryszsk said, “I’m hunting fastballs, and feeling really good at the plate.” On the win, the slugger said, “This was a huge one. Calvert Hall is a really good team, and a win like this is pretty big for us.”

Edmonds said he was relying on his fast ball.

“I tried to get ahead 0-2, and then mix in my slider. My high fast-ball was really working today. I focused on throwing strikes and doing my job. Calvert Hall is a great team. Lamar (King) had my number today, but I kept my composure.”

Pictured above: John Petryszak had another big day at the plate with three hits, including a home run.

No. 1 Archbishop Spalding traveled to Loyola-Blakefield, Monday, and defeated the Dons, 11-4, to retain of share of first place in the MIAA A Conference.

The Cavs (11-2 overall, 5-0 MIAA A) opened up the game by scoring four runs in the top of the first, highlighted by a 2-run Matt Gormley home run. Michael Roeder added two doubles, and Caleb Estes and Braeden Piotrowski doubled as well. Eddie Sarget struck out 8 batters on the way to picking up the win on the mound.

Coming off back-to-back MIAA A Conference losses, to Calvert Hall and Archbishop Curley, No. 7 Mount St. Joseph came from behind, Monday, to get back in the win column with a 6-5 victory over No. 10 John Carroll.

John Carroll jumped out to a 4-0 lead in the top of the first inning, but he Gaels battled back with one in the second and two in third before gaining the lead with a three run fifth inning.

Tanner Vicendese was 3-for-4 with two runs scored for St. Joe (9-5 overall, 3-3 MIAA A) and Elijah Shafer had a two-running single.

Matt Archbibald was 3-for-4 for John Carroll, with a double, one run scored and one RBI. Casey Carpenter also doubled in a run for the Patriots (6-5 overall, 3-3 MIAA A).

On the road in Roland Park, St. Mary’s won its first MIAA A Conference league game of the season with a 10-2 victory over host Gilman. The Saints scored four times in each of the first two innings to set the pace.

Rocco Abdinor had a home run and two RBI for the Saints, while Ryan Merkel had a pair of doubles and five RBI.

Eric Chaney earned the win with four strong innings of work, allowing just two hits while striking out six. Abdinoor pitched the final three innings without allowing a hit and striking out five.