Curley presses its way into the MIAA B semifinals

Second half defensive pressure carries the Friars to a 67-59 playoff victory over Indian Creek; Severn also advances with a one-point win over St. John’s Catholic Prep

by Gary Adornato
Archbishop Curley sophomore Dinari Boykin’s steal and break-away dunk, just ahead of the final buzzer, put an exclamation point on an outstanding second half defensive effort which propelled the host Friars to a hard fought 67-59 MIAA B Conference quarterfinal playoff victory over a young Indian Creek squad, Tuesday afternoon in East Baltimore.
The victory advances third-seeded Curley into Thursday’s semifinal round and it will visit second-seeded and defending champion Gerstell Academy in Carroll County. Gerstell had a bye in the opening round. Also on Tuesday, fourth-seeded Severn edged fifth-seeded St. John’s Catholic Prep, 52-51, to earn a Thursday trip to top-seeded St. Paul’s.
Boykin’s dunk was part of a 10-2 closing run by the Friars, over the final 2 minutes, 55 seconds of the contest, with seven of those points created by steals. 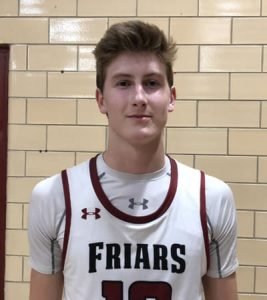 Curley junior Josh Knapp had 21 points, including 12 in the third quarter, and block six shots to help Curley advance in the MIAA B playoffs.

Up 58-57 with 1:38 left, Curley got a mid-court steal from junior Niyon Carroll and he raced to the hoop for a beautiful left-handed finish. He was also fouled on the play and converted the “and one.” With the clock down to 16.1 seconds, the Friars’ Travis Dobbins was fouled trying to finish a break-away, after another steal, and hit both free throws to virtual ice the victory. On the next possession, Boykin sent the home fans away with one final highlight.
“We are a small team so we pretty much have to establish the press and make teams rush into situations,” said Curley coach Darnell Hopkins in explaining the move to the press at the outset of the third quarter. “My guys, they fought in the fourth quarter, they stayed disciplined on defense and came out with the victory.”
After opening the game with a 7-0 run and leading for much of the first quarter, Curley (16-10) saw its fortunes change for the worse at the outset of the second quarter.
The Eagles (14-13), who had won seven of their final eight regular season games to qualify for the playoffs, opened the second quarter with a 14-2 charge as they threatened to run away and hide from the Friars. Curley, however, began its comeback with back-to-back three-pointers from Travis Dobbins and Caleb Johnson and closed the half on a 14-5 surge, getting back within two, 36-34, at the intermission.
Junior Khiyon Washington, who led Indian Creek with a game-high 25 points, had 16 points in the first half, including three three-pointers in the first quarter. Senior Khalil Johnson had eight points in the second quarter and finished with 16.
At the outset of the second half, Hopkins employed his full court pressure and it gradually wore down the Eagles, who play four freshman and a sophomore extensively. The third quarter was a battle, as the teams were tied twice and the lead changed hands twice. In the end, Curley was able to shave one more point off its deficit during the period, largely due to the work of junior Josh Knapp, who scored 12 of his team-high 21 points in the quarter.
Knapp was a force all afternoon on the glass and in the interior defense, coming away with six blocked shots. According to Knapp, Curley’s defense fuels its offense.
“Playing tough on defense, that’s one of the things we work on a lot in practice, getting our hands on the ball,” said Knapp. “We bring up that intensity and we get steals and easy buckets.”
Hopkins said the Friars are at their best when they stay within their system.
“When we get away from ourselves and guys try to be heroes, we don’t look good,” said Hopkins. “But, when we go within our system and run our offense, anybody on my team can score and Josh just happened to step up, big time.”
In addition to Knapp, Curley received 15 points from Johnson and 10 from Dobbins.
Indian Creek coach Josh Pratt was proud of his squad.
“We’re playing four freshman and a sophomore. I think the future is bright at Indian Creek. It’s just a learning experience,” said Pratt. “Give Curley credit. Their pressure turned us over enough to win the game, but I thought we came and played hard. Give Curley credit. They came out here on their home court, in a one or two possession game, and they pulled the win out.”
As far as the match-up with Gerstell (19-12), Hopkins said, “We have to stay disciplined on defense. We can’t get rattled and, basically, run our system. If we do that, we play good against anybody in our conference.”
In Tuesday’s other B Conference semifinal, fourth-seeded Severn (14-11) edged fifth-seeded St. John’s Catholic Prep (16-10), 52-51, in Severna Park.
Mo Terry scored 18 points, including a pair of go-ahead free throws late in the contest, and AJ Burch netted 17 for the Admirals, who advanced to a semifinal date, on Thursday, at top-seeded St. Paul’s (18-8).
Pictured above: Curley’s Dinari Boykin (left) applies tight defense against Indian Creek’s Khiyon Washington during the second half of the Friars quarterfinal MIAA B Conference playoff victory.
MIAA B CONFERENCE QUARTERFINALS
ARCHBISHOP CURLEY 67, INDIAN CREEK 59
ICS 17 19 13 10 — 59
AC 17 17 14 19 — 67
INDIAN CREEK: Logan Harris 4, Bryce Collier 10, Khiyon Washington 25, Khalil Williams 16, Josh Chambers 1, Josh Leedy 1, Daniel Ablorh 2, Carter Mullin 4. TOTALS: 19 14-22 59.
ARCHBISHOP CURLEY: Josh Knapp 21, Travis Dobbins, 10, Caleb Johnson 15, Dinari Boykin 4, Todd Gray 6, Niyon Carroll 5. Totals: 22 17-20 67.
SEVERN 52, ST. JOHN’S CATHOLC PREP 51
ST. JOHN’S: Collins 9, Pilgrim 5, Bell 8, Hill 9, Moore 15, White 5.
SEVERN: Baldwin 4, Burch 17, Berko 7, Donegan 6, Terry 18.