To see the St. Paul’s lacrosse team in recent weeks it’s hard to understand how the Crusaders opened their MIAA A Conference schedule at 0-2, but that is ancient history.

The 4th-ranked Crusaders, as they stand today, are red hot, having won six consecutive games, including a very impressive 9-5 win over No. 3 Calvert Hall, On a rainy Senior Day Friday in Brooklandville.

A fast start on the offensive end, an outstanding performance from the defense and, when necessary, outstanding goalkeeping from junior Alex Rode were the key ingredients as the Crusaders (12-5 overall) improved to 6-2 in the league. St. Paul’s now heads into it’s regular season finale, Tuesday at arch-rival and 2nd-ranked Boys’ Latin, in a battle that will determine second place and which club receives a first round bye in the playoffs.

It all adds up to a very happy head coach.

“I’m really happy with how the team is playing, how the coaches are coaching. Our coaches have really worked hard and the kids have equaled the task,” said St. Paul’s coach Rick Brocato. “Six games ago everybody was counting us out and we just believed in ourselves. We’ve made some adjustments, the kids have bought into it and they’re working really, really hard. We’re trying to get off to some fast starts and just control the controllables. Today, against a very well coached and a very good team, I thought we played our most complete game.”

Seniors Mitch Gordon and Joe Pollard, along with junior Keegan Pearl led the offense, each scoring 2 goals and getting 1 assist. 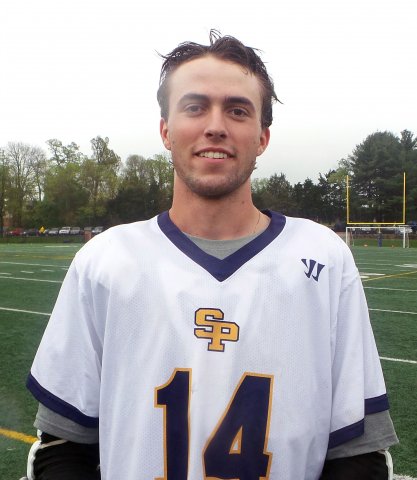 Calvert Hall got on the board when Ethan Mintzer assisted Zach Green, who led the Cardinals with 3 goals, late in the first, but the Crusaders countered with goals from Pearl and Gordon to push the lead to 5-1.

According to Brocato, most of the credit for the way the Crusaders are playing goes to his seniors.

“Coach Pietramala (Johns Hopkins) has always told me, over the years, you are only as good as your seniors. I really believe that. He and I are close friends and I believe what he says there,” said Brocato. “I think the key to any team is your senior leadership and when people were doubting them, these guys held it together and got everybody to rally around each other. What a great way for them to finish up their Senior Day, here with a win against Calvert Hall.”

Calvert Hall scored a pair of goals late in the first half, as JT Bugliosi got an unassisted tally and Jacob Kelly fed Jack Kinnear, to make it a 5-3 game at the intermission. St. Paul’s, however, scored the first three goals of the second half to take an 8-3 lead with 11 minutes, 50 seconds to play and it was downhill from there.

“We get that fast start and everyone is buying in. I think any team in this league, you get to a fast start, it’s going to help you out, but at the same time you have to keep the cylinders rolling or the team will come back,” said Pollard. “If you are up by five goals, it does not mean as much when you’re playing in the MIAA A Conference.”

Posner finished with a goal and 2 assists for St. Paul’s, while Karey and Tyler Rockhill finished with one each. Equally important to the effort was the play of Rode, who stopped 16 shots including several of the spectacular variety.

Despite its playoff significance, the St. Paul’s-BL game would be a big deal no matter the records of the two teams.

“It is really a storied, wonderful rivalry between St. Paul’s and Boys’ Latin,” said Brocato. “As I have said over and over to them, control emotions and control the controllables and play St. Paul’s lacrosse. That’s what we’re going to try and do on Tuesday.”

Pollard discussed what needs to be done to be successful on Tuesday.

“Stay mentally stable and emotionally stable, especially the last time, the last ride as a senior,” said Pollard. “It’s one of the most important things going into a big rivalry game like this, but at the same time, don’t let it play into your head. Just keep playing hard and playing like you have the whole season.”

“Right now, we’re hot but we’re taking it game-by-game,” added Gordon. “We try to treat every opponent the same, but BL definitely has a special place in our heart. We’ll definitely be ready for that game.”

Calvert Hall also closes the regular season with a big rivalry game and it also carries weight. The Cardinals (13-4, 5-3) are hosting Loyola and the two teams are currently tied for fourth place. It will be the first of two meetings between the rivals next week, as they are both locked into the 4-5 slots. The prize for Tuesday’s winner is the right to host the playoff rematch, next Friday, in the A Conference quarterfinals.

10 Years of Excellence: VSN’s No. 1 Baseball Infielder of the Decade

From JV to instant hero