Calvert Hall’s Jake Commodari said that he was “very nervous” as he lined up for a penalty kick with three minutes remaining in the Maryland Interscholastic Athletic Association championship rugby match against archival Loyola Blakefield on Tuesday afternoon.

With his team trailing, 19-17, the title was on the line as the senior scrum-half lined up to take the 10-meter kick from a severe angle. 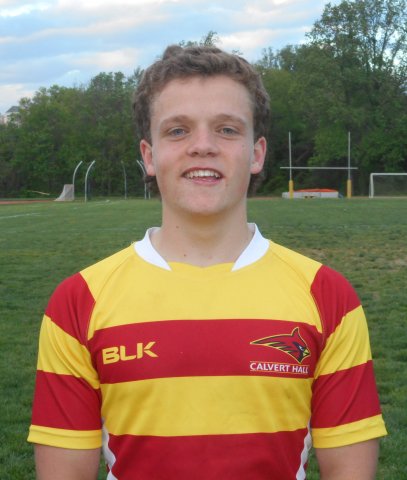 “I took my steps back, took my stride and hit the ball,” he said. “It went though the uprights.”

The Cardinals then played solid ruck defense the rest of the way to hold on for a 20-19 victory over the Dons, setting off a wild celebration by Calvert Hall fans and players.

Beating Loyola in the title game is relatively rare, considering that the Dons have advanced to eight finals and won six times in the 11 years rugby has been a sanctioned MIAA sport.

Included in Loyola’s six crowns was a one-point victory over Calvert Hall in the 2015 finale.

“They’re our most respected opponent,” Commodari said. “There’s no other team I’d rather play for a championship. The rivalry with Loyola is built on respect.”

Because the scrum-half is more or less the quarterback of the attack, Commodari was in the thick of the action for most of the game, despite being one of the smaller players on the field.

His long run for a try gave the Cardinals a 17-12 lead in the second half before the Dons answered with a score of their own to jump on top, 19-17.

“It was the same kind of heated exchange we have in any sport when we play Calvert Hall,” said Loyola coach Michael DeCesare. “They are two great schools which love to play each other.”

The game turned when a long Calvert Hall kick was downed in the goal area by Loyola, resulting in a 5-meter scrum for the Cardinals.

Commodari converted the kick shortly thereafter and then the Cardinals went into the equivalent of a prevent defense to secure the championship.

First-year coach and former Calvert Hall and Towson University player Brandon MacPherson earned the title for his alma mater in his first year at the helm.

“Coach MacPherson made sure we held each other accountable,” Commodari said. “The championship means so much for former players and for us. It’s a new era for Calvert Hall rugby.”

MacPherson said that his philosophy of incremental daily improvement helped to change the program’s culture.

“We focused on improving one percent every day and doing the little things right,” he said. “There was some pressure today because of who we were playing, but we reacted to it well.”

Another title tsunami for St. Mary’s