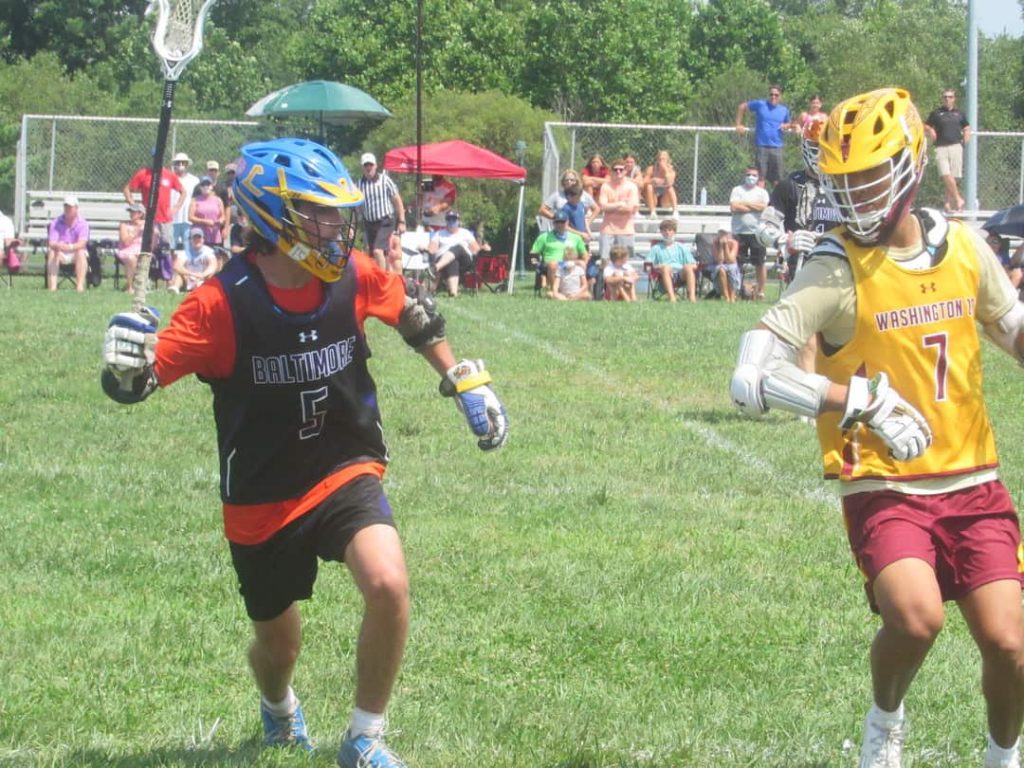 McCabe Millon joked a bag of ice has been his best friend the last few weeks. The rising McDonogh School sophomore has had a hectic summer lacrosse schedule.

As he walked off the field at Meadowood Regional Park after the All-America South Super Region underclass tournament final Sunday afternoon, Millon could finally look forward to another bag of ice and some rest.

Bullis School rising sophomore attack Maliik Wood denied Baltimore’s comeback, scoring about four minutes into the extra session, giving the District victory. Ryan Duenkel, who will be a freshman at St. John’s College, had three goals and an assist for Washington.

The District led 6-1 late in the third quarter before Baltimore rallied, tying the game late in regulation. Jacob Pacheco, a rising sophomore from Valor Christian in Colorado, tallied twice for Baltimore.

“It’s a long long two days…you got to expect a letdown at some point,” said Boland. “We had a tough game with South again and was able to muster up enough juice to put a comeback. Unfortunately, we couldn’t finish it. “

After getting past the South, 6-3, in Sunday morning’s semifinal round, Baltimore quickly found itself in a 5-0 hole after the opening 10 minutes in the final.

The locals got on the board with 3 minutes, 52 seconds remaining before halftime as Pacheco scored off a helper from Calvert Hall rising sophomore middie Wyatt Hottle in an extra-man situation. Million found Owen Dixon (Loyola Blakefield) late in the third quarter, making it 6-2. The quarter ended with D.C. drawing a penalty, giving Baltimore an extra-man opportunity to start the final 10 minutes of regulation.

Baltimore ceased on the momentum as Millon converted twice in extra-man, bringing the locals to within 6-5 with 6:06 left in regulation.

“In four games, we had only one man-up opportunity,” said Boland referring to Saturday. “We started making plays between the lines.”

Millon capped his hat trick, converting in extra-man (assist from Calvert Hall’s Joshua Kelly), pulling Baltimore even at 6 with 1:28 to play in regulation.

Baltimore received another man-up chance in overtime, but Washington goalie Caleb Fyock (St. John’s) nabbed Kelly’s shot from about nine yards. The District missed wide on a shot attempt, and, off the restart, Wood came from his left and bounced a low shot past Baltimore goalie Ashby Shepherd (Severna Park) for the walk-off.

Millon enjoyed playing with his Baltimore mates, who mainly came from MIAA rosters.

“We’ve all had long summers, but to grind through this is a testament to Baltimore grit,” said Millon. “It’s really cool to play together especially when you’re always playing against each other. The MIAA is so competitive, you want to knock the other guy out.”

McCabe Millon was huge in Baltimore’s second half comeback Sunday. The McDonogh rising sophomore attack scored three goals in the half as Baltimore rallied from a 6-1 deficit.

Millon, who plays club with Team Maryland 91, has had to squeeze two months of summer action into the last couple of weeks with schedules being altered due to the Covid-19 pandemic.

“It’s really cool to be come out here and forget everything that’s going on in the world,” said Millon, who has a family vacation to the Florida panhandle next up. “It’s just you and your team, trying to put the ball in the net.”