Indian Creek battles from behind for 9-inning victory and double-dip of St. Paul’s to win MIAA B Conference baseball crown (VIDEO HERE!) 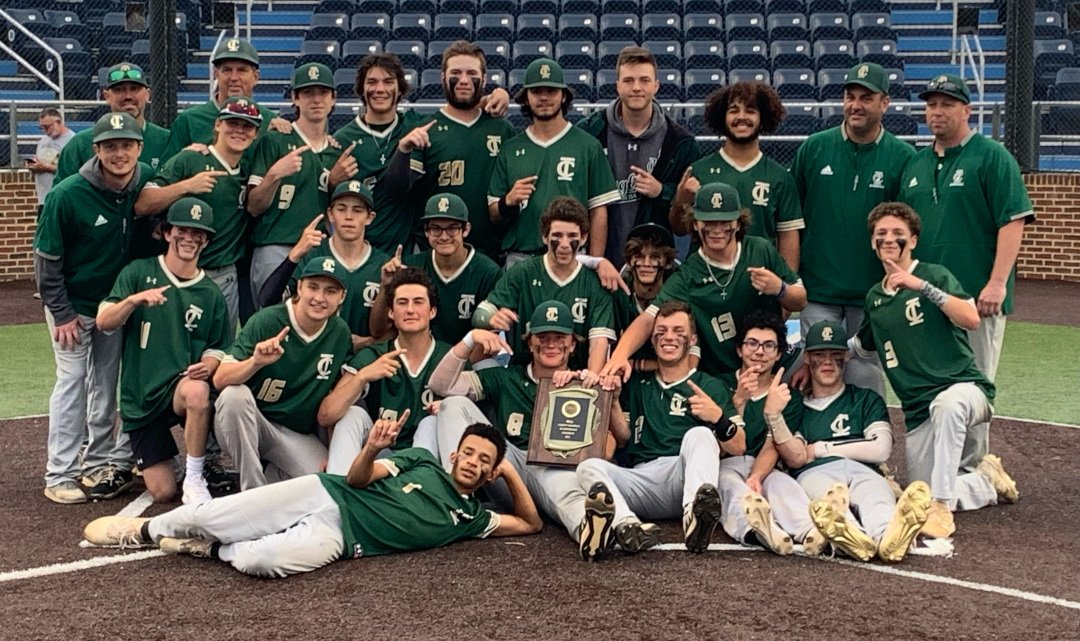 by Derek Toney and Gary Adornato

The 2022 Indian Creek School baseball team will be remembered as a team that just would not be denied.

Bumped into the elimination bracket in the second round of the MIAA B Conference double-elimination tournament, the Eagles rolled off three consecutive wins to reach the finals and then completed a double-dip of St. Paul’s School, Monday and Tuesday at Harford Community College to win their first B Conference baseball championship. 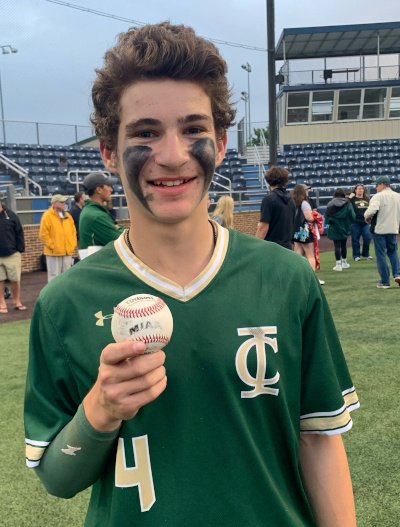 Indian Creek sophomore shortstop Riley Handwerger shows off the baseball he hit for a home run in the Eagles’ 9-8 extra-inning victory over St. Paul’s for the MIAA B Conference baseball championship.

Following Monday’s 10-0, 5-inning romp over the Crusaders, the Creek had to come from behind late, on Tuesday, to force extra innings before prevailing 9-8 in the 9th inning of the decisive “if” game.

Patrick Smith reached base on an error leading off the bottom of the ninth and Matthew Hall came on to pinch run. Hall advanced to second on a sac bunt by Ben Bucci and scored one batter later on a game-winning RBI single by sophomore Riley Handwerger.

It was the capper of big two-day effort for Handweger, who had a pair of doubles and scored three runs in Monday’s win, and it was his second big hit on Tuesday.

Handwerger homered over the left-field fence leading off the bottom of the sixth to pull the Eagles within two, at 8-6.

“I was late in the count. I was trying to fight. I saw a fastball and had to take it,” said Handwerger of his dramatic home run. “I kind of golfed that thing. I didn’t think it was gone. When I hit second base I knew it was gone. It was amazing.”

Andrew Harris doubled to leadoff the seventh and Chris Kokoski was hit by a pitch to put the tying runs on board. Julian Butler then cut Creek’s deficit to one with a single to left which scored Harris. After a strikeout, Bucci came up with one down and hit a come-backer to the mound. St. Paul’s pitcher Matthew Meck fielded it and cut down Kokoski at the plate while Butler raced to third, setting the stage once again for Handwerger.

The fleet shortstop did not come through with a hit this time, but he still made something happen, when he also hit a ball to Meck and forced an error with his hustle to first, allowing him to reach and Butler to score the tying run.

“Riley is up there swinging the baseball bat and he plans to get a hit every time and when he doesn’t, he’s not happy,” said Indian Creek manager Matt Selmer of his scrappy sophomore. “He’s a grinder. He’s a six-day a week practice guy and he’s in our facility in the morning or in the evening, three or four days a week, swinging the bat.”

After two scoreless innings to start the game, St. Paul’s took a 1-0 lead in the third on an RBI triple by Cameron Nelson. Indian Creek responded immediately with three runs in bottom of the third. Kokoski put the Eagles in front for the first time with a two-run double and Harris, who walked ahead of Kokoski’s double, later scored on a wild pitch.

St. Paul’s got even in the the top of the fourth with an RBI double by Charlie Konkolics, who was then chased home on an RBI single by Tim Wilcox. In the Crusader fifth, Wilcox hit a hard ground ball and reached on an infield error which allowed John Padousis and Hayden Hair to score, giving St. Paul’s a 5-3 lead.

Indian Creek erased that advantage with a two run single off the bat of Smith in the bottom of the fifth, only to see St. Paul’s move back in front in the top of sixth when Hair came up with the bases loaded and cleared the bags with a double to left.

Not to be overlooked on an evening where not many pitchers had success, Xavier Quigley stood out for the Eagles. He pitched the final three innings allowing just two hits and no runs to earn the win. While he kept the Crusaders bats quiet, the Eagles rallied.

During the tough moments in Tuesday’s final, Indian Creek continued to played with the confidence that it would prevail in the end.

“We’re forever optimistic since the playoffs started,” said Selmer “The way we’ve been swinging the bats, we really felt at no point were we out of the game.

“This has been a testament to the guys and how hard they worked. They just refused to lose.”

The wait continues for St. Paul’s, which was an out away in the bottom of the seventh from winning its first MIAA title since goign back-to-back as A champs in 2002 and 2003.

“Honestly, these guys have fought all year. We’ve face so much adversity throughout the season and it’s tough,” said Crusaders coach David Miele. “It’s a tough pill to swallow, but I can’t be prouder of the development, the growth. These guys have meshed together. Relationships have been built. That stuff is never going to leave us. That’s the biggest thing we’ve instilled here at St. Paul’s.”

“That’s a well coached team. They threw well. They threw strikes. They put pressure on us when they needed to and they came out on top. They were the better team today.”