“I was thinking put myself in position and we’ll see,” said Boys’ Latin School freshman. “After 36 holes, if I’m up, great. If not, I gave my best.”

Halleron’s demeanor, as well as his precocious game, more than served him well. The Laker finished atop the leaderboard to claim the title at Woodholme Country Club in Pikesville Wednesday.

Halleron shot a 3-under 70, besting Loyola Blakefield’s Will Koras and Lou Baker from St. Paul’s School by four shots. Gilman School junior Jarius Gaines was fourth after a 5-under 68 Wednesday, the best round of the two-day, 36-hole finale.

Tuesday, Halleron shot 69 to claim a two-shot day one lead. He was in the final pairing Wednesday with Koras, a junior, and sophomore Ford Bennett from McDonogh School.

“I didnt know what to expect playing with two great players. I just was trying to get to fairways and greens,” said Halleron. “If I rolled in a few puts, great, but tapping in pars would be good.”

Halleron said his confidence soared with four birdies in the final nine holes Tuesday. Wednesday, he was the model of consistency, shooting 35 on the front and back nines.

“All season, he’s been so consistent and level-headed, that’s the best thing about him,” said Franklin. “He never gets too high or too low. Playing against older kids in this competition, I had a good feeling he was going to keep his composure.”

Halleron is the first BL linker to win the MIAA crown since Patrick Hohman in 2008, and joins St. Paul’s Greg Rodgers (2001) and Chris Navarro from Spalding (2012) as the only freshmen titlists. Both Rodgers (went on to play at University of Notre Dame)  and Navarro (currently a sophomore at Maryland) won three MIAA individual crowns.

“I’m going to try to take it one at a time,” said Halleron, “but a four-peat sounds nice.”

It was a repeat for St. Paul’s as team champion as Baker, Tyler Caballero, Will Ford, Joe Hudak and Trip Smith combined to shoot 604, besting Loyola (606) and Calvert Hall (630).

It’s the ninth MIAA championship for the Crusaders, under the guidance of longtime coach Rick Collins and Eric Nordstrom. 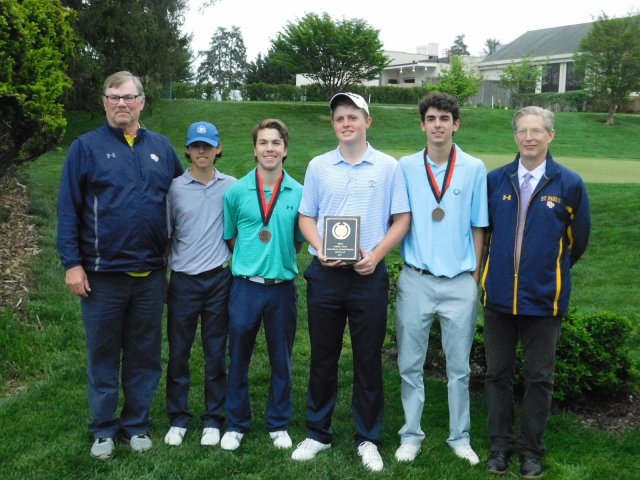 Clang, clang and a comeback