When Amani Hansberry transferred to Mount St. Joseph High during the summer, many high school basketball pundits in the DMV region believed the move made the Gaels, already with the services of budding star Bryson Tucker, a force for coming seasons.

The “future” has arrived for Mount St. Joseph, which capped its area campaign in rousing fashion Sunday. The No. 1 Gaels claimed the 51st Baltimore Catholic League Tournament championship with a 66-56 victory over fifth-ranked St. Frances Academy at Loyola University’s Reitz Arena.

The Gaels rebounded from a slow start in the opening minutes, building a double-digit margin before, again, showing poise down the stretch to gain possession of the Brother D. John Smith Trophy for the eighth time in program history. The Irvington school is the first to win the BCL Tournament and MIAA A Conference championship since 2015 when Calvert Hall College pulled the feat.

Clatchey, who commended his junior varsity and freshman squads for sweeping in the MIAA A and BCL postseason, said the varsity championship run this winter may not had been possible without Hansberry, a Montgomery County resident who left St. John’s College (D.C.) and the Washington Catholic Athletic Conference, arguably the best private high school basketball league in the country.

Regarded as one of the nation’s top 100 recruits in the Class of 2023, Hansberry is a rebounding vacuum with the ability to score inside or from the perimeter. He totaled 61 points and 52 rebounds in three tournament games.

“Coming from the area I came from, it was important I trust my teammates, my coaching staff and get the job done,”  said Hansberry. “It means a lot to me.” 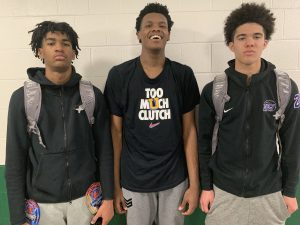 While Hansberry and Tucker, who overcame a second straight slow start shooting Sunday, are the engine to the Gaels’ machine, there are many key clogs.

Junior guard Ace Valentine had 10 points and five assists Sunday, and was named to the all-tournament squad. Austin Abrams, another junior, finished with 12 points and had a key block in the fourth quarter.

The Gaels needed every contribution to finally solve the puzzle that was St. Frances Sunday. The top-seeded Panthers swept Mount St. Joseph during the regular season.

It didn’t start well Sunday for the Gaels, who missed seven of their first eight shots and had two turnovers. St. Frances had a 9-2 advantage through the opening three minutes.

“For real, it was ‘not again, we’re not going for this again,’” said Hansberry. “That brought the grit, the toughness out of us to get the job done.”

A 12-2 run, capped with a Hansberry dunk, had the Gaels in front, 14-11, after the opening eight minutes. Mount St. Joseph carried the momentum into the second, advancing the lead to double-digits (26-15) after Hansberry got a friendly bounce on a turnaround jumper.

The Gaels continued rolling as Tucker drove and dish the ball out to Abrams, who drained a 3-pointer from the elbow for a 29-15 advantage. The second-seed from Southwest Baltimore had its largest lead, 35-20, just shy of six minutes remaining in the third.

St. Frances crept to within 37-28, but Abrams, off a cross-court pass from Tucker, dropped another dagger. Tucker followed with one of his own, from the top of the arc, and the Gaels had the lead back to 15 (43-28) with 2:39 left in the third.

“Every time I went somewhere they were running two guys at me,” said Tucker, who shot 8-of-11 in the second half after a 1-for-5 first half. “Austin was getting open, Ace, Amani, Aidan, they were just moving and I was finding them.”

After St. Frances closed to 45-40 in the fourth, Tucker hit another dagger. The Panthers scored, and Tucker beat the defense down the floor for a basket, giving Mount St. Joseph a 50-42 lead.

Mount St. Joseph answered as Abrams, cutting down the lane, converted off a feed from Hansberry. Cortez Johnson’s offensive rebound and score brought the Panthers back to four, 60-56, with 2:04 left.

St. Frances got a chance to pull within a possession after Hansberry missed. Jahnathan Lamothe’s attempt was partially blocked by Mess.

Hansberry collected the ball, and Tucker, off a downcourt pass from Valentine, finished with a slam, putting the Gaels up, 62-56, with 1:16 remaining. Hansberry and Tucker each added two free throws in the closing seconds to complete a two-week postseason gauntlet.

“When you’re a perimeter oriented team, you got to make shots. We didn’t make threes,” said Myles, whose team shot 4-of-18 from behind the arc, and, outside of the third quarter (six-of-10), 33-percent (14-of-42). “They did a good job on our ball screens…they competed. This is a rivalry game, I think both teams competed. They made shots and we didn’t.”

The Gaels overcame a double-digit deficit against John Carroll in Friday’s semifinals and outlasted Loyola Blakefield in overtime in Wednesday’s quarterfinals after trailing in the fourth. Last weekend, Mount St. Joseph bested Our Lady of Mount Carmel in the final moments for the MIAA A crown, after overtaking Archbishop Spalding in the semifinals.

“Finish every possession, no plays off,” said Hansberry. “Execute every time down the court.”

“Amani’s just a factor on both ends of the floor, the rebounds, his defensive presence, his ability to pass and score,” said Clatchey. “Terrific player.”

Tucker was also selected to the all-tournament team with Hansberry and Valentine. Basima, Lamothe and teammate Bryce Lindsay were also chosen.

With Hansberry, Tucker, Abrams, Valentine, Farrell and Sean Jones, Mount St. Joseph is set for a huge 2022-23 campaign. The Gaels will complete their season at the Alhambra Catholic Invitational Tournament at Frostburg State University this weekend.

“We’re at the point now we don’t have to rebuild, we just reload,” said Clatchey, whose team has won 10 consecutive decisions (six vs. VSN Top 10 teams). “To be honest, the impact of Bryson coming to Mount St. Joseph…I had a feeling the type of impact he (Hansberry) could have and the way him and Bryson could play together. To coach it everyday and then what they’ve done, it’s big-time.”