The William Wells Challenge hopes to create a new chapter in Baltimore basketball. If Saturday’s opening salvo is any indication, it’s more than on its way.

The East Chase Street school led 24-9 after the opening period, trailing only twice after the game’s first possession. The Panthers led by as many as 38 points in the second half.

Off to a rare slow start, St. Frances coach Nick Myles was able to play most of his roster Saturday, at the expense of the Panthers’ eastside neighbor.

“It’s been a struggle early so it’s definitely a good win,” said Myles, whose team dropped its first two games last weekend. “We compete for the same kids.”

The lead hit 30 late in the third as Patterson was hit with two technical fouls inside of 45 seconds. Marvin Price had 12 points for Patterson (2-1), and sophomore guard Gerard Mungo, who was a varsity reserve for St. Frances last season, added 11.

Mount St. Joseph had to quickly leave RAC Arena early Saturday evening to get back to its Irvington campus for the junior ring dance. On the court, the undefeated Gaels (8-0) made another escape against Poly in the featured event.

“This is a big win. We scheduled Poly in the offseason and knew it was going to be a big game that we had to win,” said Mount St. Joseph senior Darryl Morsell. “The whole team stucked together and found a way to win, eventhough we didn’t play our best.”

The MIAA A Conference powerhouse climbed out a five-point hole early in the final period of regulation, tying the game on Tyree Myers’ free throw with 3.7 seconds left. Morsell, who’s verbally committed to the University of Maryland, missed a tough jumper to end regulation after rebounding Myers’ missed free throw.

Smith opened the extra session with a short jumper. Poly had a five-second call and a Nigel Jackson steal thwart its first two possessions, and Morsell hit a 10-foot jumper, giving Mount St. Joseph a 60-56 advantage with 1:49 remaining in overtime.

“We just got a lot of faith in each other,” said Jackson. “A lot of credit to our coaches, we do a lot of situations in practice which really help us pull games out in the end.”

The Gaels led 29-23 at halftime, but the defending Baltimore City Division I champs Poly (2-1) stormed back in the second half behind DeVondre Perry. The 6-foot-6 Temple commit scored nine of his game-high 19 points in the third quarter, putting the Engineers in the lead.

Perry fouled out with 5:41 as Mount St. Joseph, sparked by a four-point play and three-pointer from Bishop, grabbed a 51-25 advantage with 5:28 left in regulation. Without its best player, Poly remained vigilant, gaining a 56-54 on a Torrain Stephens layup off a feed from Demetrius Mims with 61 seconds to play in regulation.

But without Perry and 6-8 sophomore center Amani Walker (fouled out), Poly was unable to push through the 4-minute overtime, not scoring a basket until the game’s end. Mims, a junior, finished with 18 points.

Engineers coach Sam Brand lauded his team’s effort, less than 24 hours after beating D.C. public champ H.D. Woodson at the Baltimore/D.C. Challenge in the District. He decided take a gamble in the fourth quarter Saturday with Perry.

“He’s a senior and wanted to trust him with six minutes left. I thought about taking him out and putting him back in,” said Brand. “He got the 5th [foul] so quick after he got the 4th, we were hoping to a steal a minute or two.

It was a classic battle that could’ve went either way in regulation. The difference in overtime was we were missing two starters and they weren’t.”

There have been occasional Baltimore City public-private school games since the city left the Maryland Scholastic Association for the state public association (MPSSAA) after the 1991-92 school year. The William Wells Challenge is the first effort since the Metro Classic (Fuel Fund Game) 25 years ago, focused on bringing the top city and Baltimore Catholic League schools together. 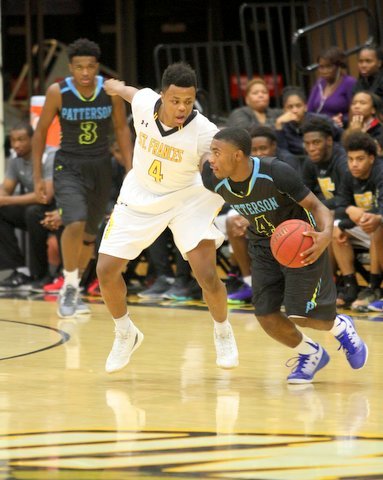 Wells, who was inducted into the BCL Hall of Fame last spring, founded the St. Frances boys basketball program and spent 28 years as its head coach, winning a record seven BCL Tournament titles before retiring in 2008. The Dunbar grad was also the longtime director of the Madison Square Recreation Center in east Baltimore and oversees the Craig Cromwell Summer League at the iconic “The Dome” at Madison.

“St. Frances is William Wells and William Wells is St. Frances,” said Myles, who started as an assistant under Wells 10 years ago. “With our league schedule, playing a game like this would be tough, but there’s no way I’m saying no to Coach.”

Loyola leaves No. 5 Saints behind

Loyola and Gilman slide through to the second round