It’s been a trying season for St. Frances Academy boys’ basketball team, but it has found solace in its young talent. The future provided the biggest moment of the season for the Panthers Saturday evening.

No. 15 St. Frances defeated Chicago’s Morgan Park, 76-75, in the Charm City/Windy City Shootout at Poly. Freshman guard Adrian Baldwin scored on a follow-up at the buzzer, capping an improbable rally.

No. 8 Poly put together a late surge, but fell, 69-68 to nationally-ranked Simeon Career Academy in the showcase match of reigning city public league champions. Jalen Horton-Tucker scored 21 points for Simeon (15-0 overall), ranked No. 8 in the nation by USA Today.

Down 14 points in the third quarter, Poly found itself down 69-68 after De’Vonde Perry’s 3-pointer with 3.2 seconds left in regulation. Simeon didn’t touch the ball after Perry’s make, and the remaining time expired.

Poly coach Sam Brand said his team was unable to recover from a slow start.

“When we’re playing our way, we can make a signature run, and it kind of happened with a minute left in the game,” said Brand. “It was just too little too late.”

Poly (8-6) was even early, but the southside Chicago powerhouse pulled out to a 41-28 halftime advantage. The Engineers went more than six minutes without a field goal in the second.

Simeon had its largest lead, 45-31, after KeJuan Clements’ basket off an Engineer turnover, but Poly started inching back as freshman point guard Raheem Ali’s layup made it 51-46 entering the fourth. Simeon had the lead back to double digits, 67-57, with 1:24 remaining,

Ali, who led Poly with 21 points, started the final push with a 3-pointer, followed by Perry’s thunderous slam, making it 67-62 with 26.8 seconds to play. The Temple University commit stole the ensuing inbound pass and dropped a 3-pointer from the top of the arc with 12.1 seconds left, bringing the defending city league Division I champ Engineers to within 67-65.

Evan Gilyard, Simeon’s lone starting senior, was fouled with 8.6 seconds remaining and converted two free throws. Perry, who finished with 20 points, made it a one-point game with his 3-pointer.

But it was too late.

“I don’t think Simeon beat us, we beat ourselves,” said Perry, who picked up two fouls inside the first 3 minutes and sat until early in the second. “We didn’t do the little things.”

Down 19 points in the second half, St. Frances came back against the Windy City’s fifth-ranked squad. Freshman guard Jordan Toles had 16 points for St. Frances (7-11), and Elijah Epps added 15. Ayo Dosomnu led Morgan Park (11-3) with a game-high 30 points.

The hero was Baldwin, who got a loose ball in the air and put it back through the basket, setting off a wild celebration capped with him getting hoisted back to the Panthers’ bench. The 6-foot guard scored all seven of his points in the final frame.

“We never gave up. It was the all second unit, they played hard and fought back,” said Baldwin. “The fourth quarter, I had to score.”

The Panthers received 46 points from their bench as junior Terrell Davis had 11 points and eight assists.

Trailing 61-46 entering the final frame, St. Frances closed to 75-71 after Baldwin’s 3-pointer with 1:24 left in regulation. Toles made it 75-73 with 47.8 seconds after hitting two free throws, set up by a steal from junior Terrell Davis.

After a five-second call on Morgan Park on the ensuing inbounds, Eral Penn was fouled and converted one of two free throws with 47.4 seconds to play. The Panthers regained possession with 14.5 seconds after a loose ball foul on Morgan Park, trying to burn time off the 30-second clock.

Davis missed the front end of the double bonus, but didn’t get another attempt as Penn stepped into the lane for a violation. Morgan Park lost the ball on the inbounds, giving St. Frances another chance with 13.6 seconds remaining.

Baldwin got the ball to Eric Turner, who missed a tough turnaround jumper. The ball was knocked back into the hands of Baldwin, who provided arguably the best moment of an otherwise difficult campaign for the defending MIAA A Conference champion Panthers.

Saturday’s victory was just the second in eight games decided by five points or less this season. 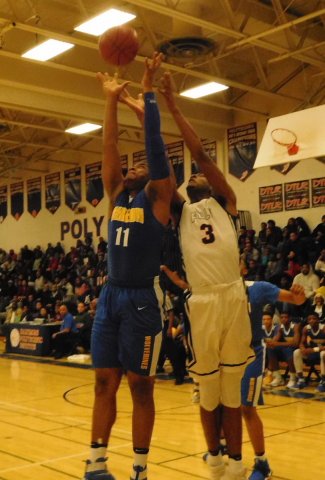 “It’s been a tough year — not what we’re used to — but I’m proud of this group,” said St. Frances coach Nick Myles, who has 11 underclassmen on his roster. “We fight and fight, and tonight we learned how to win.”