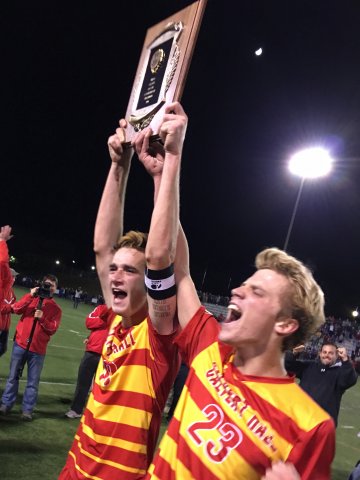 In a high school soccer game played at the highest level, No. 3 Calvert Hall College and No. 1 Archbishop Curley treated nearly 2,500 fans to a championship classic, Sunday evening at Anne Arundel Community College, as the Cardinals scored twice in a four minute span, in the later stages of the second half, to stun the Friars and capture the school’s first varsity soccer championship since it won back-to-back MIAA A crowns in 2002 and 2003.

Calvert Hall (16-4-2 overall) brought a sudden halt to what seemed to be a tidal wave of Curley momentum when senior Ben Alexander made an aggressive run up the right side to meet a perfectly struck arching volley, from the far left side by fellow senior Brady O’Connor. At full speed, Alexander headed a shot inside the right post to tie the contest, 2-2, with 13 minutes, 46 seconds to play.

The score put the Friars (19-4-2) on their heels, while amping up Calvert Hall’s intensity, and the Cardinals got what proved to be the game-winner four minutes later. Junior James Rosa triggered a long throw-in from the right corner towards the far post, where O’Conner won the ball in the air and volleyed it into the net.

“It’s unbelievable. We didn’t stop fighting until the end. We were down. We’ve been there before during the season,” said O’Connor. “So many people doubted us. Everyone doubted us. They said we were never going to beat Curley, but you know what, we fought and got the W.”

Alexander, who led the Cardinals in scoring this fall, credited his classmate for making things happen.

“I made a run to the far post and whenever Brady has the ball, you know he is going to find you,” said Alexander. “That’s what he’s done all year, right on my head and an easy finish.”

Curley played brilliantly for much of the second half and dominated the Cardinals for long stretches, breaking a 1-1 tie, nine minutes after intermission on an outstanding goal by senior Alejandro Arbelaez. Following a clear up top by Calvert Hall keeper Kyle Cooper, Arbelaez caught Cooper scrambling back into the box with a 45-yard blast that bent, right to left, inside the far post.

For the next 15 minutes, the Friars were like a buzzsaw, relentless attacking the Cardinal goal, creating several opportunities, including two point-blank chances that may haunt them for years to come. The first came at 26:39 when junior Ben Stitz slid a nifty pass to the right of the box, freeing senior Matt Brummet for a one-on-one opportunity with Cooper. Aiming for an opening in the right upper 90, Brummet fired high of the mark. Then, four minutes later, Stitz, standing at the right post, chipped a pass over Cooper to a wide-open Arbelaez, eight yards in front of the goal. In his haste to burry a shot, Arbelaez fired a rocket into the crossbar when a softer shot probably would have done the trick.

Over the next 10 minutes, the Friars continued to create excellent chances but never did find the elusive third goal. In the eyes of Curley coach Barry Stitz, that was the difference.

“I thought not getting that third goal when we had a chance was, obviously as it turned out, a big part of the game. If we got that third one, we may have been able to close them out,” said Stitz. “They scored a great, great goal to tie it and the third goal, off the long throw-in, was a little bit fluky, but that’s what happens, sometimes the ball doesn’t bounce your way. They came back from a 2-1 deficit with 12 minutes to play. They’re a very good team and they got it done tonight. That’s why they are champions and they deserve it.”

In the first half, Calvert Hall scored the game’s first goal, in the 26th minute. Senior Chris Carroll hit a free kick from 40 yards out. The ball bounded in the box untouched and seemed to fool Curley keeper Ben Gentry, who was caught between advancing on it and staying back, when it hopped over his head and into the goal. Curley got the equalizer in the 38th minute from senior Dylan Poetzel, who won a beautiful volley, struck from the right side at the far post by Tyler Sosnowski.

“I just can’t say enough about all of our seniors,” said Zinkand. “Ben Alexander, getting that equalizer, from Brady and then Brady getting the game winner. I don’t think you could have written a better ending for us this year, with those two.”

Zinkand also touched on restoring glory to one of Baltimore’s most storied high school soccer programs.

“I didn’t want to add any pressure to the boys. It’s been 13 years since we’ve been here, but they knew, they understood it, and what an effort. I am so proud of them,” he added. “The alumni have been fantastic and I knew what it meant inside. I wanted to come through for them. It’s been five years since I have been back, but it is well worth the wait tonight.”

On the other side, Stitz summed up the agony and ecstasy of such a game.

Berko and Burch lead the Admirals

Severn and Pallotti win openers in MIAA B baseball playoffs