Two football teams that have changed dramatically since they played one year ago, met under the lights at John Carroll, Friday night, and No. 7 Calvert Hall turned in a big performance in routing the 14th-ranked Patriots, 41-6, in a non-league MIAA contest.

Last fall, John Carroll, led by VSN Offensive Player of the Year Kurt Rawlings and a quartet of outstanding receivers, scored a 28-21 win at Calvert Hall, igniting the confidence that carried the Patriots to a perfect 12-0 season and the MIAA B Conference championship. The game also defined a Cardinal team that would go on to a 5-6 campaign.

With Rawlings now at Yale and three of the four receivers also off to college, a pair of Patriot quarterbacks struggled against a swarming Calvert Hall defense, Friday, that produced eight sacks, an interception and several tackles for loss.

Offensively, the Cardinals, after a slow start, pulled off several big plays in scoring 38 points in the middle two quarters, resulting in a running clock throughout the final quarter.

Jeffery Kordenbrook opened the scoring for Calvert Hall, with the first of a pair of field goals, connecting from 28 yards out, with 2 minutes, 39 seconds remaining in the first quarter, staking his team to a 3-0 lead.

The Cardinals next possession began at their own 30, late in the first quarter, and they proceeded to march 70 yards, on a 16-play drive, and scored on a 1-yard plunge by senior fullback Owen Reese, early in the second quarter.

The key play was a fourth-and-13 conversion from the John Carroll 30, when Cardinal quarterback Ben Brooks rolled to his left and whistled a strike back over the middle which senior Kam Brooks snatched for a 25-yard gain to the John Carroll five.

The Cardinals (2-0) would also score on their next two possessions, as Kordenbrook booted a 24-yard field goal and senior Tim Smith gashed the Patriots for 25 yards over two consecutive carries, including a 12-yard touchdown run, to cap a 3-play, 40-yard drive. With the score, the Cardinals took a 20-0 lead into the half.

Calvert Hall’s first drive of the second half was even briefer, as the Cardinals needed just two plays to move 54 yards and take a 27-0 lead. On first down, senior BJ Watson ripped off a 49-yard run and was rewarded with an additional carry which he turned into a 5-yard scoring burst, giving the Cardinals a 27-0 lead with 11:19 still to play in the third quarter. A few minutes later Brooks connect with Xavier Gravette on a swing pass, which Gravette broke into a 40-yard touchdown reception, and a 34-0 Cardinal lead.

Junior quarterback Nadir Ismail started for John Carroll and drove the Patriots into Calvert Hall territory on the first possession of the game, picking up three first downs. The drive evaporated, however, when Calvert Hall junior Dorian Woody intercepted a Ismail pass at the 21-yard line.

John Carroll turned to senior Nate Lebuhn in the second half and he led JC on  its only scoring drive, a 13-play, 82-yard third quarter march, with Lebulhn getting the score on a 3-yard run. The Cardinals negated that score with their final touchdown, a nifty 40-yard run by Chris Cooper.

“It all comes down to a couple of things – offseason, weight room,” said Davis, who deflected credit to his assistants, Mike Williams and Vernon Southwick. “We scored 40 points and only allowed six. That goes back to those two guys and their staffs.” 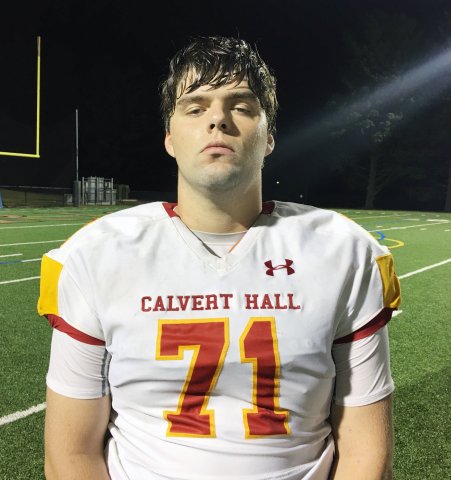 Davis refused to acknowledge that last year’s loss to the Patriots was a motivating factor.

“It’s all about twenty, sixteen. I love this group of kids. They have worked hard in the offseason. They deserved to go 1-0 tonight.”

According to senior defensive lineman Luke Hickey, the success of the Calvert Hall offense made it easier for the defense to perform at a high level.

“It all starts with the offense. They got us a big lead, up 20 at half, we were really able to go into that pass rushing mode,” said Hickey.

Reese said the offense is really starting to gel.

“Quarterback Ben Brooks and all of our receivers and running backs are just studs,” said Reese. “We follow our offensive line and just get the job done.”

Calvert Hall (2-0) will return home next Friday to host Mansfield (MA) at Kelly Field, while John Carroll, which saw its 12-game win streak come to an end, will travel to Loyola Blakefield next Friday in an effort to right the ship.

Cardinals rebound with a vengence

No rest, no worries