Gately struck out nine, and walked three, and only one Gael got as far as third base in a stellar effort that allowed the Cardinals to rebound after a season opening, 5-4, extra inning loss to Archbishop Spalding at home on Monday.

Solomon gave up all three Hall runs in six innings of work on Thursday.  Solomon held the Hall to six hits, but the Cardinals made them count. The Hall took a 1-0 lead in the top of the second when hot-hitting right-fielder Greg Carter singled, stole second, moved to third on a fly-out to right,and scored on a Jack Finn base hit.

Carter was 2-for-3 at the plate, to add to his 3-for-4 performance last week against Curley.

The Cards made it 2-0 in the third when second sacker Tyler Webster doubled, and then scored on a single off the bat of center-fielder Troy Stokes. Third-baseman Nick Delp, who is known for his pitching prowess at the Hall, provided a little insurance for Gately, whacking an opposite field solo homer off of Solomon in the fourth.

Delp said he connected with an outside fastball.

“I just went with it,” Delp said. “Gately had a wonderful job on the mound. He threw strikes.  He has a great work attitude, and he gives 110%. He works hard.” 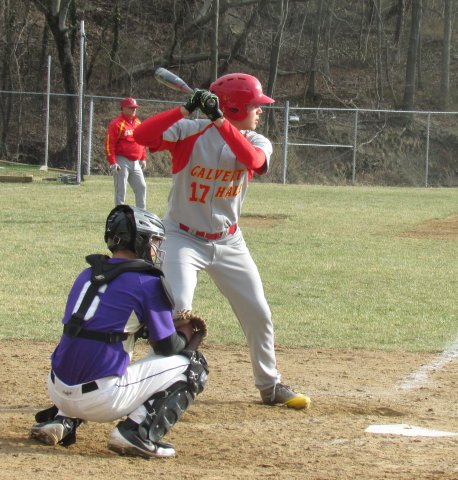 The humble Catholic University bound Gately said he was just trying to throw strikes, to give his team a chance to win.  The only hit he allowed was a one-out single to Andre Brown in the first inning.

Calvert Hall will host DeMatha on Saturday night at Carlo Crispio Stadium. The Gaels will play at North Point High School on Friday, and then host Gilman in A Conference action next Monday.

Loyola knocks off No. 10 Boys’ Latin

St. Paul’s gets it done at home