by Gary Adornato
When you coach the varsity football team at Calvert Hall, the biggest win of the year, if you are fortunate enough to get it, always comes on Thanksgiving morning.
Turkey Bowls, as well as playoff and championship games aside, Donald Davis picked up one of the biggest wins of his tenure at Calvert Hall, on Saturday, when his Cardinals knocked off Henry A. Wise, 19-14, in the rain at The Hall.
Wise, a perennial 4A state power from Prince George’s County came in with a state best 43 game streak and the victory earned Davis the honor as the Baltimore Touchdown Club Coach of the Week.
Davis said it is a victory he and his players will cherish. 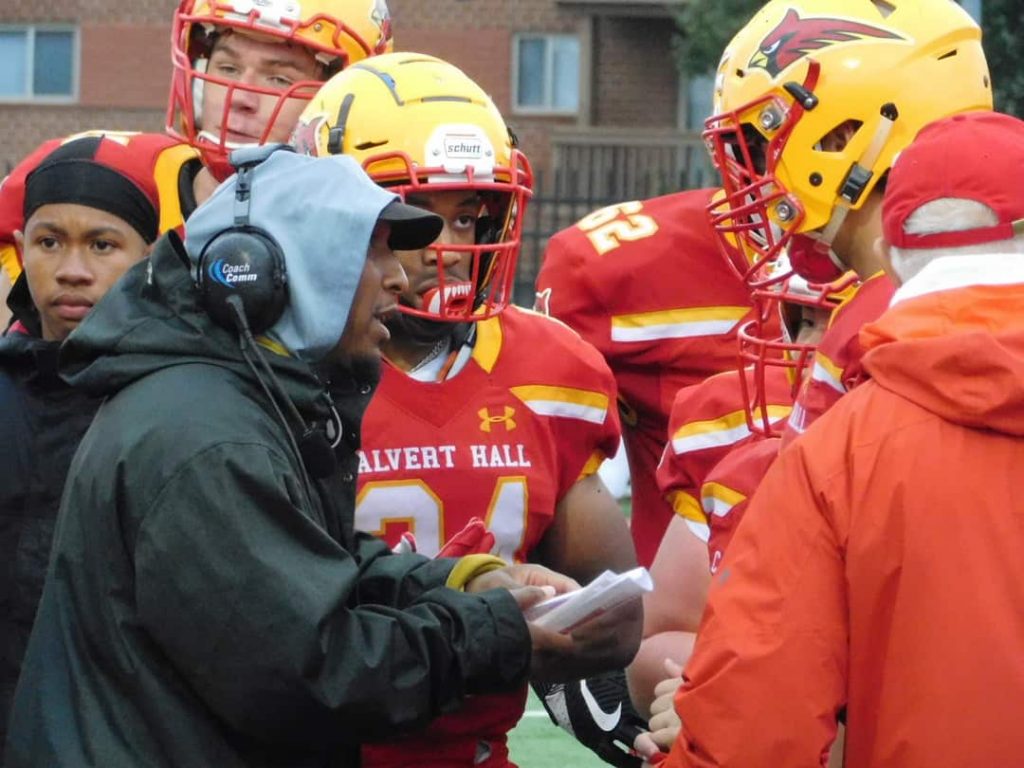 Donald Davis coaches up his Cardinals during their big win over Wise.

“This is a tremendous and unique win,” said Davis, now in his 12th season as the head coach at his alma mater. “Seldom does a team amass 40 plus wins in a row. A ton of credit goes to Wise for that accomplishment. For our kids, the opportunity to play against ‘history’ is an honor and for us to stop a historic streak makes for special memories for our guys and our school community.”
Calvert Hall nearly ended the Wise streak a year ago when they went on the road and dropped a heart-breaking 15-13 decision in Prince George’s County that extended the Pumas’ run of consecutive wins to 30 at that time. According to the Davis, his returning players had the game in mind all summer.
“Our kids have in some ways been preparing for this game since we lost to them last year. The resolve, patience and focus needed just to prepare is difficult. To actually outplay a team that just seems to only know how to win takes a togetherness that can’t be simply manufactured. This is a special group of young men.”
Davis, like all successful head coaches relies on talented support staff and assistant coaches. He shares his BTC honor with them and took a moment to reflect on each of them.
Vernon Southwick – Asst Head Coach. “He was our defensive coordinator. He still coaches and advises me. His presence is invaluable.”
Frank Palomo – Director of Football Operations. “Frank helps to build relationships in the community. He has served in several capacities during his time with me including being the head JV football coach. He coached most of the team I have right now. He and the JV staff did a great job.”
Paul Franzoni – “He is our current JV coach and has been our freshman coach for almost a decade. Again, he and his staff are the guys that grew this group of young men in there beginnings at Calvert Hall.”
Phil Tran – “He is our strength coach. The strength and speed development of our guys allows us to be in this position.”
Chris Zinn – “He is our athletic trainer. He keeps and gets our guys healthy.”
Brother Len Rhodes – “He is our moderator and spiritual leader.”
Peter Dougherty – “He coaches our specialists and is in charge of game day operations.”
Nashid Coleman – “Our QB coach. He is also responsible for the pace and signals in our offense.”
Steve Weldon – “Steve coaches our wide receivers and handles personnel and package changes in game.”
John Davis – “He is our offensive line coach and is the Dean on offense (over 30 years of experience).”
Frank Curreri – “Our defensive Coordinator. He currently carries the torch of great defense at our place.”
Bill Mojica- He coaches inside linebackers and is our special teams coordinator. We blocked a punt in each or our games this season.”
Andrew Kibler – “He coaches our outside backers. A new and great addition to our staff. Andrew has added new and fresh ideas and positive energy to our staff.”
Eli Troxell – “Eli coaches the secondary and held Wise to no touchdowns in the air.”
Nelson Kern and Eric Adamski – “Both are former CHC defensive linemen that coach the DL. This is our best unit and one of the best in the state.”
Not only does Davis share this award with his coaches and players, he gives credit to everyone at Calvert Hall.
“This is an award for our school community. Everyone contributes to a win like this. Our staff works extremely hard and they are basically volunteers. This is a nice reward for that work.”
Finally, Davis stressed the importance of the work done by the Baltimore Touchdown Club in support of high school football in the state.
“It’s hard to quantify all that the BTC does,” said Davis. “The fellowship of coaches. The way they bring various areas together. They are the glue that connects public, private and our various counties in Baltimore.”
Pictured above: Donald Davis leads his team off the field after the Cardinals defeated Henry A. Wise, 19-14, on Saturday, ending the Pumas’ 43-game winning streak.