Coaches will tell you it’s the little things that can make the biggest differences.  That may have been the case Thursday morning in the 95th annual Turkey Bowl between arch-rivals Loyola and Calvert Hall.

Down 15-0 with zero momentum, heavily favored Calvert Hall used a couple of seemingly minor Loyola miscues to steal three points late in the second quarter, a spark of momentum that carried over into the second half and pointed the Cardinals to a 25-22 come-from-behind victory over the Dons.

The victory was Calvert Hall’s fourth in the last five years in this series, but Loyola, which won last year in overtime, still has the all-time edge at 49-38-8.

The victory ultimately came late in the fourth quarter when junior Peter Ferrara kicked a 30-yard field goal, with just 2 minutes, 11 seconds left, and the Cardinal defense sealed the win when Jeff Wheaton recovered a John Goska fumble, at the Loyola 46, with 1:23 left.

Ferrara was also in the middle of the second quarter turning point.

Facing fourth and 26 from its own 41, Calvert Hall (7-4, 3-3 MIAA A Conference) was content to run out the clock and regroup at the half. Loyola (3-8, 1-5), however, called a timeout to force a punt.  But, the Dons were flagged for two consecutive five yard penalties, prompting Calvert Hall coach Donald Davis to send his offense back on the field.  It proved to be a great move.

Senior quarterback Kenji Bahar, who was 13-of-15 for 157 yards in the contest, delivered a perfect throw down the right sideline for a 32-yard gain to senior Dionte Austin, who got out of bounds at the Loyola 19 with just three seconds to play in the first half.  That led to a 36-yard field goal by Ferrara, cutting the Cardinals’ deficit to 15-3 heading to intermission.

Calvert Hall went right back to work on the first drive of the second half, getting into the end zone for the first time on a 22-yard pass play from Bahar to Morgan Scroggins.

Bahar, who was 3-for-3 for 37 yards on the 65-yard drive, targeted Scroggins in the right flat, but his pass was deflected up into the air.  Scroggins stepped up to field the tumbling football and then turned inside, racing right up the center of the field for the score.  Ferrara’s point after attempt failed, but momentum had shifted, as the Cardinals pulled within one score at 15-9.

Loyola, however, made the Calvert Hall comeback a little more difficult with a score on the ensuing the kickoff, but it was not your usual kickoff return for a touchdown.

The Dons’ Dana Young fielded the kick at his own 19 and was corralled by the Cardinal coverage out near the 35. During the tackle, the ball came loose and was picked up by Loyola lineman Ryan Gallagher, who returned it 65 yards for a score.  Calvert Hall contested that Young was down by contact, but the touchdown stood and Loyola stretched its lead to 22-9.

Bahar found Scroggins again, on the Cardinals’ next possession, for a 14-yard touchdown pass, and third-team running back B.J. Watson, returning from early season elbow surgery, broke off a 41-yard touchdown run, with 3:20 left in the third quarter to tie the game at 22-22.

Watson finished the game with 68 yards rushing on six carries, getting most of the work in the fourth quarter after the Cardinals lost the top two runners on their depth chart. Junior standout Tim Massey went out early in the third quarter and his backup, sophomore Timothy Smith, was knocked out with an ankle injury, after rushing 10 times for 70 yards, with most of that production coming in the third quarter.

Calvert Hall owned the field possession battle in the fourth quarter. The Cardinals drove to the Loyola 18 before turning the ball over on downs, early in the quarter, but got the ball back at their own 38 and drove deep into Dons’ territory to setup Ferrara’s winning kick. 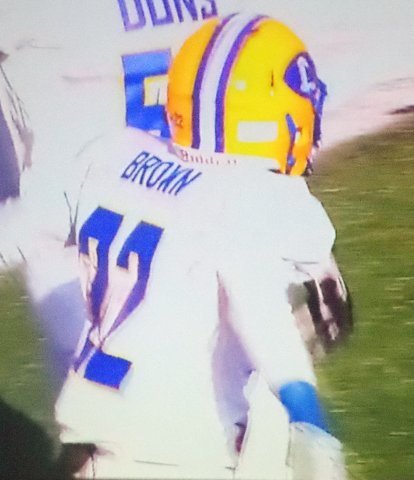 Aside for the two penalties that led to Calvert Hall’s late opportunity, Loyola played a near perfect first half.

The Dons sustained a 15-play drive on their first possession before stalling on downs at the Calvert Hall 27, but they came right back with a 13-play, 61-yard march that was completed by an 11-yard touchdown run by senior Marcellus Brown. Loyola added a two-point conversion catch by John Stabb and it led 8-0.

The Loyola defense then forced a turnover, as Calvert Hall’s Lawrence Cager was stripped of the ball after a short reception and Michael Bell pounced on it at the Loyola 47. The Dons needed just seven plays to cash in, scoring on a 23-yard pass from Goska to Azende Smith.

Goska was Loyola’s most prolific offensive performer, rushing 15 times for 84 yards and completing 7-of-16 pass attempts for 70 yards and a score.

Smith and Biafra Okoronkwo combined for 68 yards rushing for the Dons.

Curley’s offense gets in gear